Suspect is believed to have 20-year-old female with him. 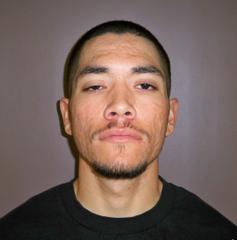 Jose Barajas of Hollister is wanted by Hollister Police for murder.
×

A state “BOL” (be on the lookout) notification was issued late Saturday night for 20-year-old Hollister resident Jose Barajas, who is wanted by Hollister police for murder, kidnapping and assault with a deadly weapon after he allegedly shot and killed a person.

On Friday, Aug. 1 at about 9 a.m. Hollister Police officers responded to a call of a shooting victim that had just arrived at Hazel Hawkins Hospital in a private vehicle. The victim was later flown to a Bay Area trauma center for medical attention and died in a Bay Area hospital.

Detectives have identified the homicide suspect as Barajas, described as 5’9”, 160 pounds, with black hair, and brown eyes. Barajas has a tattoo of a “B” and a skull on his left forearm and skulls on his right forearm and should be considered armed and dangerous, according to police. Police said may have a female, identified as 20-year-old Vanessa Flores of Hollister, with him. It is not known if Flores is being held against her will.

Police are asking that if the suspect is seen, to call 911 immediately.

Anyone with information regarding this incident is requested to contact Detective Chris Wells at 636-4330. Persons wishing to remain anonymous may call WeTip at (800) 78-CRIME. Information provided to WeTip may qualify for a reward.