Judge Steven Sanders set a preliminary hearing for Oct. 22 to determine if there is enough evidence to either move forward with a trial or dismiss the case. DNA evidence still not available. 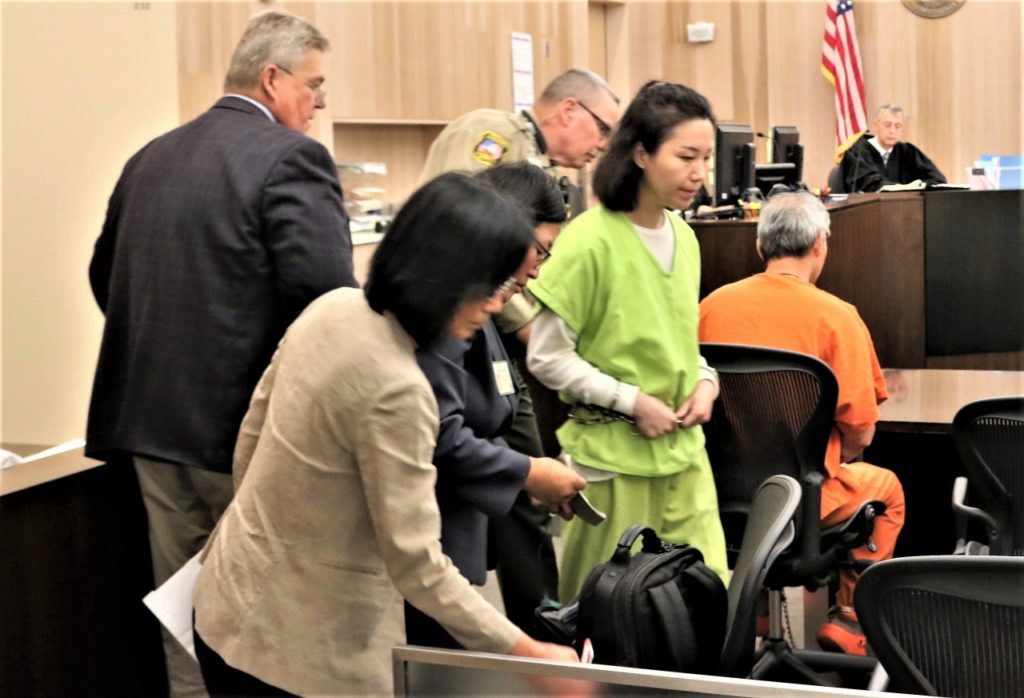 After their July 20 appearance in San Benito County Superior Court, Sang Ji and Jung Choi are one step closer to either going on trial for the late 2017 murder of Ji’s wife, Joon Ji (aka Clara), or walking away free, according to Judge Steven Sanders. It all comes down to the preponderance of evidence the district attorney’s office presents at the preliminary hearing or examination Oct. 22, he said.

Judge Sanders, Deputy Assistant District Attorney Ellen Campos, and defense lawyers Greg LaForge (Ji’s lawyer) and Harry Damkar (Choi’s), along with two female Korean translators, had all agreed on the Oct. 22 date for the preliminary hearing. Bailiffs were hovering over the defendants, ready to escort them back to the holding cells, when Ji asked the judge through his interpreter when the 60 day countdown will begin for a speedy trial.

(According to Legalmatch.com, “The prosecution generally has 60 to 120 days to bring an imprisoned defendant to trial unless the defendant waives the right to a speedy trial.”)

“Does it start on the day of the preliminary hearing?” Ji’s interpreter asked the judge.

Sanders responded that they may not have to worry about a speedy trial unless there is sufficient evidence.

He went on to say nothing further would happen unless they were arraigned on charges during the preliminary hearing or examination. He thanked them and was about to move on to the next case, as Ji and his interpreter were hurriedly conferring in Korean, when she told Sanders she (and Ji) needed more clarification.

“So if the DA’s side is not prepared, then we cannot go ahead?” she asked.

“There’s been nothing discussed about that,” Sanders corrected her. “Your question was ‘when does the speedy trial kick in.’ Well, you don’t worry about a speedy trial in terms of the 60-day ruling you spoke of unless the case is going to trial. The case might not go to trial. No case goes to trial that’s a felony unless there’s a showing there’s a reason to take it to trial. That’s what the preliminary examination is for, to see if there is sufficient evidence to move forward to a trial.”

The interpreter thanked Judge Sanders and added (apparently speaking for Ji), “My only wish, your honor, is I want this matter to go ahead as fast as it can.”

In late 2017, Choi and Ji were apprehended days after Ji's daughters tried to contact their mother and he told them she had left the country to return to Korea. The daughters were suspicious and reported their mother missing to local law enforcement. A search warrant for the Ji home was issued Dec. 6, 2017. When evidence was discovered of a possible homicide, Ji and Choi were arrested. The Federal Bureau of Investigation (FBI) discovered the missing woman’s body buried close to San Juan Grade Road outside of San Juan Bautista. According to the San Benito County Sheriff's Office, Ji implicated Choi in the murder. The suspects have been going through preliminary hearings since late December.

After the hearing outside the courtroom, LaForge clarified that the preliminary hearing was confirmed to take place Oct. 22, which is when the defendants would learn if the case would move forward or be dismissed for a lack of probable cause. Before then, he said there will be a pre-trial confirmation Oct. 12, which will be the final date to reaffirm the Oct. 22 date.

“That could very well happen,” he said because there was still the matter of not having received DNA results from blood taken at the crime scene last December. “We’ve got all the discovery with the exception of the DNA, but that’s not going to delay the process.”

When asked whose DNA was being examined, he said no one knows.

“They found blood at the crime scene and we don’t know,” he said. “They took the carpet samples. Remember, this thing [murder] was last December. We’re already into July. That’s why we’re just going to go forward.

Read other BenitoLink stories on the murder, investigation and trial hearings: