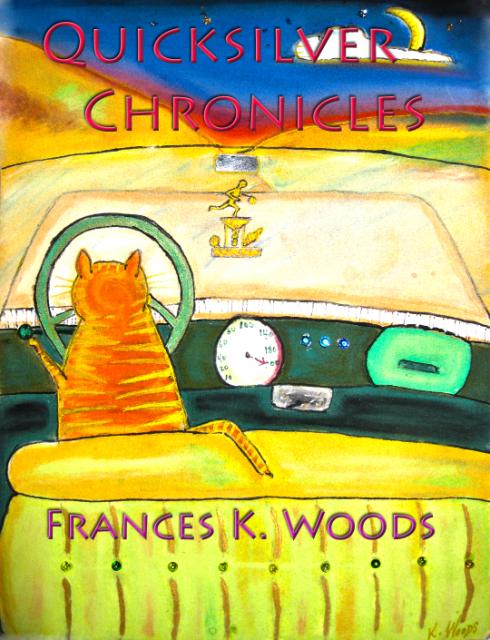 Following is an excerpt from Quicksilver Chronicles.

My siblings and I live in our respective cabins on opposite sides of a box
canyon in the Diablo Mountains of California, but there was a time when we
all lived in trailers that were dragged onto the property, like donkeys
pulled by struggling old prospectors. Most of our land is vertical, a
landscape of rusty sandstone dotted with a few tenacious pine trees, shrub
oak, manzanita, and a spattering of hardy chaparral. The old abandoned
trailers are still perched on the precious flat spots of this hilly expanse,
surrounded by a carpet of mummified foxtail grass: the bane of dogs and boon
to Hollister veterinarians. Hollister is the “county seat,” sixty-three
bumpy, curvy miles and one hundred and one minutes away to the north.
I am the lucky one. My cabin has a brook-side view on “bottom-level,” a
mere twenty feet away from the obscenely gurgling San Carlos Creek, which
runs year-round. It glows orange from the iron sulfide that comes with acid
mine drainage, a byproduct that flows from the tunnels of the mining ghost
town of New Idria, about half a mile upstream from us. But the worst element
coursing through this stream is methylmercury: a colorless, odorless organic
subspecies of the mother element that makes the dangers of a hot radioactive
isotope seem as lethal as powdered sugar. Not only is the creek poisonous,
but so are the underground aquifers. So even if we could afford to dig a well
(which we have tried) it would be pointless. We haul in our drinking water
from the ranches of the flatlands in Panoche Valley, some thirty miles down
the road, and use the filtered creek water for doing dishes and cleaning. And
bathing.

Our main source of income comes from our placer mine on San Benito Mountain.
We hunt for a rare and beautiful blue gemstone called “benitoite.” We
call our humble business the Whimsy Mining Company.

Flying Hot Water Heater, Destination Unknown
Where we live there are no handy 7-11’s or gas stations for sixty-three
miles. If we run out of bread or cigarettes, we can only hope some weekend
warriors drive recklessly on their way to the BLM outpost on San Benito
Mountain for two days of hunting and light beer drinking away from the wives,
and that their provisions get so jostled on our pot-holed roads they fall off
the back of their pick-up. That’s called salvage rights.
People ask us all the time: “Why do you live so far away from any
city?”
To offer an answer seems absurd to me, but I can say without hesitation that
we’re still not far away enough. There are many reasons why we choose to
live on the outside. A grocery checker at Snob Hill Supermarket in Hollister
saw the address on my rubber check, and asked me, “Aren’t you scared
living out there in nowhere?”
“I was just going to ask you the same thing about living here,” I
replied.
It gets rugged living in the far country. You have to be self-sufficient to
a big degree. For example, you can’t just tap into a municipal natural gas
network. We have to haul propane tanks up here to fuel our hot water heaters
and stoves. Or get the only propane monopoly in town to bring it up for you,
and they give you a good reaming while they’re at it.
I had to change a spent propane tank on my hot water heater the other night
when I got home from work at about midnight. There I was, traipsing around
the foxtails and the scrub oak outside my cabin, in pantyhose and high heels,
a flashlight clamped between my knees, trying to light a wooden stick so I
could relight the pilot. The stick blew out and I let go of the pilot
switch…and I forgot that it was still blowing out gas.
I re-lit the stick and…KABLOOEY. Burned hair, deep-fried hand. When my
brother found me, I looked like a human version of Daffy Duck after he blows
himself up instead of his foe Elmer Fudd: head burned black to a crisp with
duck bill dangling on the back of neck. But what came out of my mouth was a
rendition of Yosemite Sam’s legendary affliction with Tourette’s
syndrome, without the hindrance of a Hollywood Morality code or the FCC.
The next day, on my way to a Doc-In-A-Box urgent care facility in
Hollister, I stopped at the one spot of civilization in these badlands: the
Panoche Inn, our only beer saloon and community center, about thirty miles
down the road from Whimsy Mining. The locals went wild when they saw my
mangled, still smoking hand, which by then had grown massive pillow-like burn
blisters.
Proprietor Harry Lopez asked me what time it happened. Yup, he said.
That’s the very moment he heard a very loud four-letter expletive echo all
the way down the Griswold Canyon and reverberate past his establishment.
“You should put some butter on that paw!” said one neighbor, a
foreman at the Spanish Cattle Company.
“We ran out of butter,” I said. “But if you let me borrow some,
I’ll add some chopped garlic.”
A five-year-old cowboy named Dustin Zorba very seriously advised me that
the only thing to do was to take a chaw of chewin’ tobaccy and spit the
black juice on the burn.
I love that bar. Its patrons certainly mean well, which is far more than
I can say for neighbors who live much closer to us.

San Carlos Creek Update: When I blew up the hot water heater, it went flying
into the stratosphere like a chubby rocket. We don’t know where the
airborne projectile landed. But I hear tell that someone living about ten
miles downstream heard an unDogly THUD shortly after the big blow. He said
when he checked the San Carlos the next morning, a new landmark was standing
sentry in the middle of the creek on his ranch. He said it was a large,
cylindrical object that looked suspiciously like an abused hot water heater,
covered in orange mud.