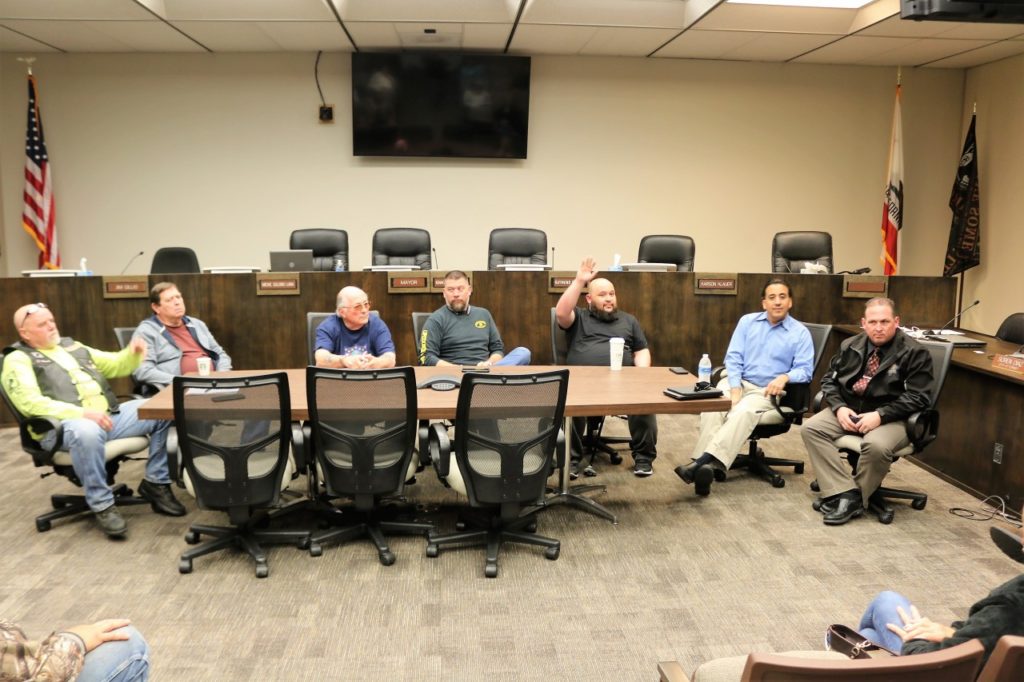 After boisterous discussion rally supporters were unconvinced that they could not pull off rally. Photos by John Chadwell. Around 25 Hollister Independence Rally supporters showed up at Hollister City Hall April 4, for what turned out to be a lively, sometimes boisterous discussion with city officials on the fate of the signature summer event.

By the end of the meeting, it was not clear if the rally would take place. The decision to move forward rested on two things: having enough law enforcement to secure the event and getting at least one of three Hollister City Council members who voted to cancel the rally in March to flip their vote.

2017 was the 70th anniversary of the Hollister Independence Rally, the city’s signature event that celebrates the 1947 town invasion by the Boozefighters motorcycle club as told in the 1953 Marlon Brando film The Wild One. The first official biker rally happened in 1997, 50 years after the original invasion.

Westrick would have to call other law enforcement agencies across California to see if he could secure enough officers for the event, which would involve having to call back the same people who had already been called twice before, first to contract their services and then to cancel the arrangements after the city council cancelled the rally with a 3-2 vote in March.

When asked repeatedly what he thought the chances would be to revive this year’s biker rally, Westrick said it would be difficult. The city’s top cop told attendees several times that he doubted how successful he might be with less than three months to work with.

The second hurdle would be to convince at least one of the three council members who voted against the rally—Vice Mayor Mickie Luna, Councilman Jim Gillio, and Councilman Karson Klauer—to change their vote. The three did not attend the April 4 meeting.

When asked if either Friend or Velazquez could try to convince the others up on the dias to change their votes, both said they could not legally do so and that it was up to the public to try to change their mind.

Avera also said that one of the three council members would have to ask for the rally to be placed on the next meeting agenda. Neither Friend nor Velazquez could do so, he said.

Another sticking point, according to Avera, was the $185,000 that a promoter would have to pay the city to primarily cover the cost of law enforcement. In the 3-2 vote in March, the council canceled the rally after Roadshows Inc. Promoter Randy Burke claimed he had lost several sponsors and could not raise the amount.

Burke and his Reno-based promotions company first took over the motorcycle rally in 2016, the third promoter in four years to take on the event. Burke was the sole promoter to submit a bid in 2016 after the previous promoter, Las Vegas-based ConvExx, left over a $90,000 dispute with the City of Hollister.

Avera said the rally was also cancelled because outside law enforcement would not be covered by the city’s liability insurance. If an officer were injured, a workers’ compensation claim could bankrupt the city, he said.

Velazquez disagreed. While Velazquez said it was open to interpretation and city lawyers needed to determine if the city was at risk, Avera saw it as a black and white issue.

“The General Fund will have to cover workers’ comp if an outside agency member gets hurt,” Avera said.

Avera said $185,000 was the figure the city settled on after several years of miscalculating the cost of the rally. One year, it had skyrocketed to over $300,000 and downtown Hollister looked like an armed camp with law enforcement officers from various state and federal agencies on every street corner and helicopters flying overhead.

Westrick said his planning meetings begin around August with ambulance companies and various city departments dealing with licensing or structures.

“It is a 10 to 11-month process of planning each year,” he said. “When we start asking [outside] public safety folks, they need to know early because they commit their resources up to six months ahead of time. Right now, we’re at the point where I can’t get those big groups anymore, at all.”

Velazquez said he understood Westrick’s point of view, but the mayor remained fixated on the money and said he felt if it could be gathered together there could still be a rally in July.

“It comes down to this: there are three council members and one of them has to say ‘I want to give it a shot,’” Velazquez said.

The cost to promote the rally is actually much higher than $185,000 because the promoter must arrange for entertainment and a host of other amenities adding up to more than $300,000, Avera said.

This did not seem to deter some of those in the room, who claimed they had already been in talks with people willing to come up with at least $150,000, as well as nonprofits to manage the rally, and insisted they could make all arrangements in time for the July 4 rally.

Mike Corbin, namesake of Corbin Motorcycle Seats and Accessories, asked Avera if after Burke told the city he was having difficulty raising the money whether he had approached any other promoters. Avera said he had spoken to a couple promoters. Corbin asked him what he thought the promoters’ position was on the rally. Avera said no one was interested in being involved at this point.

“It’s up to the community to take charge,” Velazquez said. “It would be tough. All I’m asking as a citizen is to give the community a shot. If we can’t contract the money that is promised and we can’t get the groups together, of course it’s done. I feel we can do this. We can do it right and we can start raising money for our nonprofit groups.”

Corbin told Avera the city can’t give up and has to operate as a business. Avera responded that the city is not a business.

“I was directed early on, and Ignacio [Velazquez] should attest to this, he said he is very supportive of a rally if it does not cost the city one dollar,” Avera said. “All we want is to make sure that we have adequate resources to provide a safe environment. I just need the council to say we’re going to have a rally and if the council wants to commit the funds to it, they can do that. But their stance has always been they don’t want the community to pay for a three-day party.”

Councilman Friend, who is also commander of American Legion Post 69, said the Legion and Veterans of Foreign Wars Post 9242, as nonprofits, were willing to take on the rally. Friend, Corbin, and Johnny’s Bar and Grill Owner Peter Lago said they were already talking with companies who regularly back rallies around the country that were willing to step up for the Hollister Independence Rally.

As the meeting evaporated rather than being adjourned Lago said that if Westrick could not get the necessary security there was no sense moving forward this year. He was still open to having a rally in 2019, despite Velazquez’s insistence that if the rally did not materialize this year it would never come back.

Even though Westrick did not have a clear mandate to reach out to other agencies, Corbin and Friend said they would continue their discussions with companies to raise money for at least a week while Westrick made his calls.

In talking with BenitoLink, Avera said once the outside officers had been cancelled back in March, it would be almost impossible and expensive to attempt to contract with their agencies at this late date.

Order prohibits landlords from evicting tenants for nonpayment of rent and prohibits enforcement of evictions by law enforcement or courts. It also requires tenants to declare in writing, no more than seven days after the rent comes due, that the tenant cannot pay all or part of their rent due to COVID-19.

"We can all do our part to flatten the curve and prevent further spread of COVID-19," said City Manager Don Reynolds.