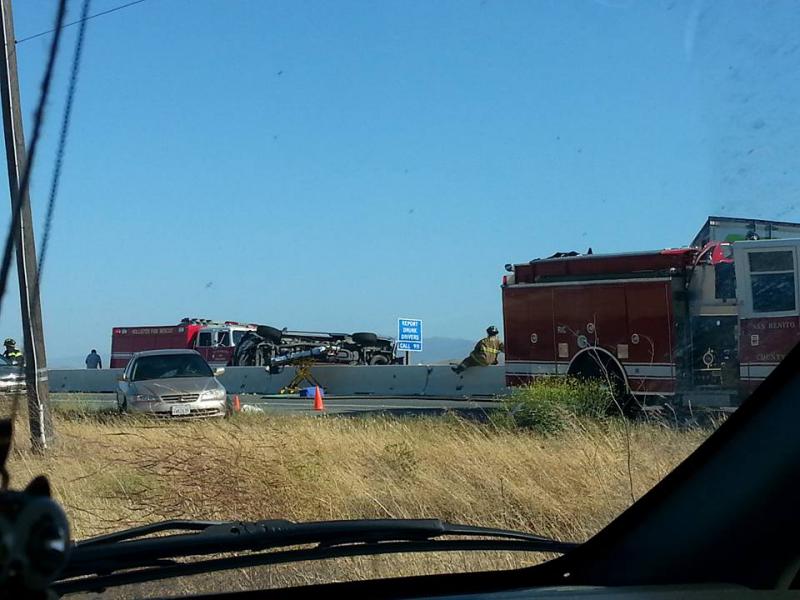 Fatal crashes on the main commuting route between San Benito and Santa Clara counties have rekindled talk about what can be done to improve safety on the two-lane Highway 25, also known as The Bolsa. The installation of a median years ago followed a series of crossover crashes that were blamed in part on the ability for vehicles to pass on the roadway.

With the economy rebounding after the economic downturn, traffic continues to increase as commuters from San Benito County head north to work in the Silicon Valley and return each afternoon or evening.

In an ongoing poll on the BenitoLink website, which asks, 'In the wake of recent fatal accidents on Highway 25, how safe do you feel traveling on the main route between San Benito and Santa Clara counties?" 61 percent of 103 respondents agreed with the response "Not very safe. I avoid driving there if at all possible," while 39 percent said they feel "As safe as I do on any other California highway." Those results reflect responses through 4 p.m. June 18.

Hollister Mayor Ignacio Velazquez acknowledged the renewed public interest in safety along the highway, posting on Facebook Thursday, "Hwy. 25 has obviously been in the headlines over the last week so it's important to understand what is really going on from the local government side." He said that city and county elected officials agree that the state highway "needs to be a 4-lane road."

"Plans and studies have been in the works for the last several years and are nearing completion," he said. "The problem is the projected price tag of $300,000,000 from Caltrans since it is a state road. Yes, that is Three Hundred Million! Locally, we have been trying to convince Caltrans to work with us on a different plan that we can get done in our lifetime."

Velazquez said officials need the public's help "convincing our state representatives to have the state pay to improve their own road."

Here is a sampling of responses to BenitoLink's poll question on Facebook:

"I've been commuting to and from Los Gatos for 6 years and it just keeps getting worse. Just getting on to 25 is a challenge without some jack*** cutting you off because they don't want to wait in the shoulder like the rest of us trying to get home. The longest part of my commute is from Gilroy to Hollister with a daily estimate of 30-45 minutes for 16 miles." – Shelley Perry

"I have been commuting to and from Los Gatos for almost 5 years now. I no longer take 25. I take 156 and go through SJB. Still not a great option, as there are more big trucks, but the traffic seems less. I leave a bit later than most, 7:30 a.m. so I think it's a bit better, but coming home is always bad. Am I concerned, you bet I am. Stay off your phones and drive safely," – Joan Sutton

"We have kids that need us home alive at night so we have switched to Frazier Lake/Shore Road for our commute home." – Chad Spencer

"I have lived here for 40 years. I remember fatal crashes on 25 since I was a child. I also have been traveling back and forth twice a month for just as long over Pacheco Pass where there are just as many fatal accidents. In high school, my good friend's father died at Shore Rd. I've know many involved in accidents then and now. Since (I was) a child, 25 has been called "Blood Alley" and Pacheco Pass called "The trail of tears." There is nothing new here, people, besides all these feeds hyping everyone up on social media. We all have our opinions on how to correct the road but the reality is people don't pay attention! When you are not paying attention then you cannot react to road or those that are breaking the laws. The majority of drivers I see are still using their phones, including truck drivers. People are doing so many things in their cars nowadays. Just drive from point A to B and get the hell off the road please." – Jennifer Porteur

"​I started driving Highway 25 (5-6 days a week) a bit over a year ago and have observed many close calls and bizarre driving behavior which could easily lead to accidents and fatalities. Highway 25 is by no means a safe road." – San Benito High School Superintendent John Perales

"Frazier is worse because crazy people pass all the time. That's what scares me. As long as you pay attention on 25 I feel it's as safe as any other highway. What makes it unsafe is the amount of cars on the road during commute hours. It desperately needs to be two lanes each side to accommodate all those cars plus all the new homes going in." – Jessica Tyler

"My main worry was the fog. Hwy 25 gets (so) foggy you can't see the car in front of you…..we individuals are the danger now, I'm the turtle driving now, you want to pass me, go for it. I value my life more than time especially when I have my diamonds in the car…my grandchildren! Slow and steady folks." – Carla Talavera

"​Drove it tonite at @55 mph and the car behind was trying to push me faster the whole way… I hit cruise control and let it roll….. it's a commute I dread twice a day." – Pepper Morgan

"I commuted for years back in the 80's and never saw an accident. The problem today is that people are in such a hurry, always speeding and still texting. Everyone just needs to slow down, look out for one another and no texting or phones." – Stella Vander Veen

"Highways 25, 152 and 156 all have problems with a lot of traffic, but the roads themselves are safe. What causes the problems are drivers who cannot drive the speed limit and who cannot leave a proper distance between the front of their car and the rear bumper ahead of them. I drove home on Frazier Lake the other day and had 4 cars pass me because I was only going a little over the speed limit. Just slow down a little people." – Helen Swanson

"I''ts not the road its the pathetic drivers!! And that's coming from someone who was in a fatal accident on that road. Thanks to a person's decision to drive drunk they sent me to the hospital with many injuries, I was in a coma for almost a month, 2 of my cousins were injured and my grandmother, little sister and aunt all passed away…. My point is the road didn't kill my family and injure the rest of us, the person that made the idiotic choice to drive drunk did! Widening the road or not won't make a difference if people are still texting and driving, drinking and driving and simply not paying attention while driving! Be smart about your decisions, not all of your decisions only affect you, they can always affect someone you don't even know….." – Valarie Lopez

Participate in our BenitoLink poll at the bottom of our homepage or by clicking here: https://benitolinkcom.wpengine.com/poll/wake-recent-fatal-accidents-highway-25-how-safe-do-you-feel-traveling-main-route-between-san. Follow BenitoLink on Facebook at https://www.facebook.com/BenitoLink.