The Hollister city council votes to add mayor's referendum petition to November ballot for vote as city awaits state attorney general's call whether it is legal or not. 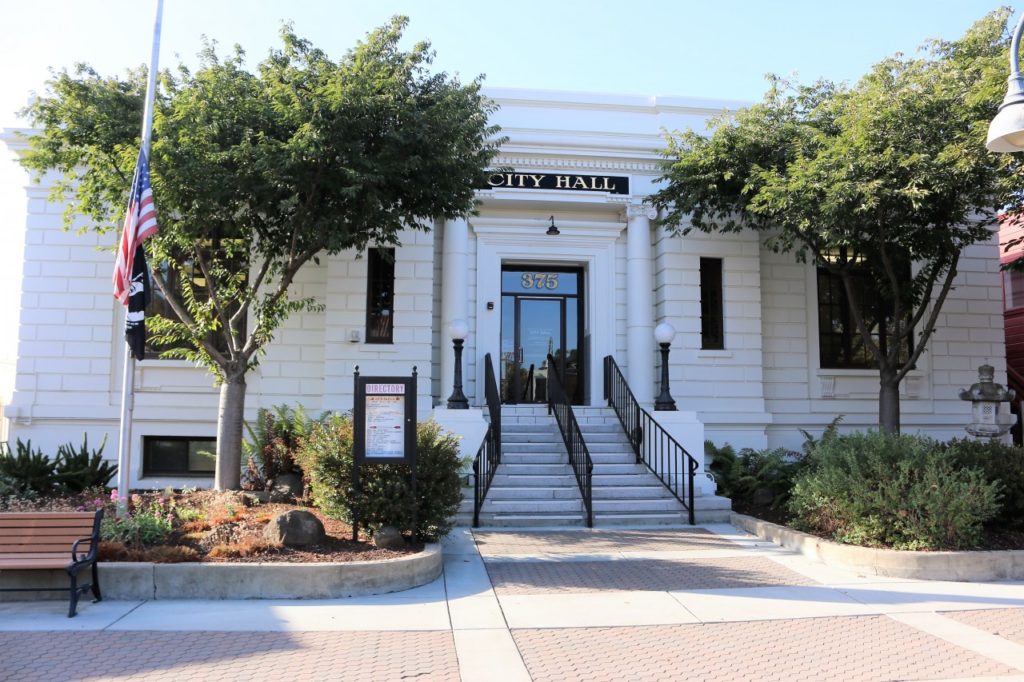 Councilman Raymond Friend said the mayor, without using his name directly, should be investigated. Correction: For clarity sake, the year 2018 has been added to all date references.

As the Hollister City Council took under consideration four resolutions dealing with the 400 block and the petition spearheaded by Mayor Ignacio Velazquez, the mayor recused himself as Vice Mayor Karson Klauer took over the meeting to receive information and possibly adopt one of the four resolutions. Ultimately, they passed the resolution to place the referendum petition on the November 6, 2018 ballot.

Interim City Clerk Christine Black reminded the council and the public that the council had certified the referendum petition concerning the development and disposition agreement between the city, the Del Curto Brothers Group and the Community Foundation of San Benito County. She then told the council they must choose between the four resolutions: 1) repeal the development and disposition agreement; 2) hold a general election, Nov. 6, 2018 to submit the referendum petition for a vote; 3) participate in the statewide primary election, June 5, 2018; or 4) hold an overtime election, April 10, 2018. At the previous council meeting, Black outlined the costs related to each choice, ranging from $25,000 to more than $200,000.

During the September meeting, it was also discussed that the city was awaiting word from the state attorney general on whether or not the petition referendum was legal. Councilwoman Mickie Luna asked for clarification again during the Oct. 2 meeting about what would happen if the attorney general responded prior to it going to the ballot. Soren Diaz, county attorney, responded that the city would have to submit a motion for reconsideration if the attorney general determined the petition was unlawful and had not been submitted to the county clerk’s office.

Council members Jim Gillio and Raymond Friend reserved their comments until after the public had a chance to speak. Former county supervisor, Margie Barrios spoke in favor of developing the 400 block. She said the 1989 earthquake may have destroyed the buildings on the block, but it did not destroy the city’s philanthropy tendencies and described the proposed development as one of the greatest opportunities the city council has ever had.

Gary Byrne, president/CEO of the Community Foundation of San Benito County, said the city had approached the foundation about it’s plans for a philanthropic center, saying the 400 block had to be developed. He said when the Del Curto Brothers approached the foundation to partner with them to build on the site it was an exciting prospect that would, hopefully, bring more people downtown. The project took on a life of its own when a private donor offered to fund a 9,000-square foot philanthropic center as a gift to the community and to support nonprofits. He said he hoped that the attorney general’s opinion would be coming soon.

“We look forward to this and our hope is that we can break ground sooner than later and we can build something the community can be proud of that will also bring other businesses downtown,” he said.

Victor Moreno said what was at stake was a First Amendment issue, the freedom of speech, assembly, and the right to petition the government. He said that is what the citizens of Hollister did and the signatures on the petition were certified as valid. He said the choice was simple, either repeal the entire development agreement or allow the people their right to vote. He felt it was an obvious decision to add the petition referendum to the November ballot because it would allow time to educate the people either way, and it was the most economical alternative. Mike Fisher, owner of Fisher’s Restaurant and Catering, admitted he was coming somewhat “late to the game,” in voicing his opinion that the 400 block should be developed. He went on to say he would like to see all of downtown restored because he is invested in it as a business owner. He urged the council to add the referendum on the November ballot in order to let the community decide. Richard Ferreira, who owns property downtown, charged that the city operates as a democracy wherein each council member was elected by separate districts. He said as elected representatives it was up to them to make decisions based on information and that they had made the right decision to develop the block.

“The last thing I want to see is that repealed,” he said. “The State of California is lazy and doesn’t look at us and has been tardy in giving us a decision. I hope you put this off to the November election so the attorney general can make a decision before the end of the year. You made the best decision because you represented the people of Hollister and not a small (group) of people who got riled up without knowing what’s going on.”

Marty Richman agreed with the previous speakers that the issue should be placed on the November ballot. He also advised the council to have the staff prepare a financial impact statement on the various choices as well the cost should residents vote against the development.

“It was signed by the same person (Velazquez) who on Facebook tried to change everybody’s mind. He has a conflict and he can’t sit here and talk to you about it, but he can go on Facebook and stir everybody up. That’s an abuse of power and the state should look into that.” – Councilman Raymond Friend

Councilman Raymond Friend agreed with the comment that he and the other council members were elected to represent 37,000 people, and not 1,600 who “believe the lies told on Facebook.”

“They’ve never been told the numbers,” he said. “If we go with the cheap election, we’re still going to have to spend $360,000 for that piece of property to sit there as a lawn for another 28 years because nobody has come up with a plan and says ‘we just want an open space.’ Well, it’s been an open space for 28 years and nobody has done anything with it.”

He went on to say four members of the council have listened to the people and came up with a plan to develop the site in an agreement between the city and the state.

“It was signed by the same person (Velazquez) who on Facebook tried to change everybody’s mind,” he said. “He has a conflict and he can’t sit here and talk to you about it, but he can go on Facebook and stir everybody up. That’s an abuse of power and the state should look into that. Other than that, we’re look at $400,000 it’s going to cost us to do nothing.”

Councilman Jim Gillio reiterated Friend’s assertion that the city would have to pay over $300,000 for the property if it is not developed, and then he addressed the amount of property taxes that could potentially be generated if the block were developed. He said over a 20-year period approximately $1.4 million would be paid to the school district.

“This would also generate sales taxes and bring more people downtown,” he said. “If this thing stays a grass lot you’re looking at property taxes on a $400,000 lot, about the same as a house bought in Hollister.”

Gillio said members of the community were deceived when they signed the petition. He related how his wife was approached outside of Safeway to sign the petition and was told that the development consisted of $750,000 condominiums.

“That’s not the scope of the project and what we need to do as a council and everybody involved with the project is to get the information out,” he said. “We have 1,600 people who signed this referendum, and they expect a choice to be made. They expect to have a vote and that’s where we’re headed, but everybody needs to know the full scope of the project. I don’t think people knew that, and if they did, we wouldn’t be here having this conversation today.”

He concluded by stating if the attorney general determines the referendum is illegal he will support the original resolution to develop the 400 block.

Councilman Klauer said the city needs to follow the election code and that he favored putting the referendum petition on the November ballot. Gillio and Luna agreed with him and the three voted for the resolution to add it to the November 2018 ballot. Friend opposed the resolution.