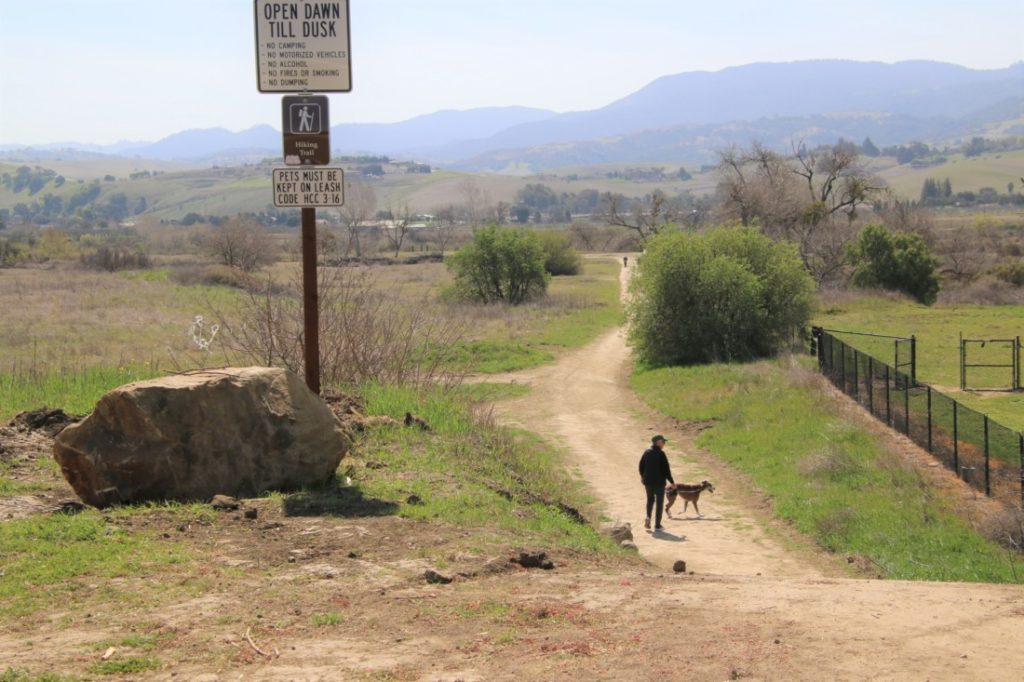 Hikers and bike riders can use the trails at the future site of the Regional Park near San Benito High School. Photo by John Chadwell.
×

Editor’s note: This article was updated as it incorrectly stated the county had purchased a 21.1 acre property adjacent to the regional park property for $700,000. The county confirmed the sale fell through the last day of escrow as someone else purchased the property.

San Benito County’s effort to create a regional park is taking shape and the design concept includes a wide range of features identified by a recent public outreach campaign. The project, known as the Riverview Regional Park, goes beyond standard sports fields and picnic areas to include disc golf, a remote control car track and a cross-country course.

In recent months, the county has taken steps to obtain funding for this project, including securing a 99-year lease for the San Benito High School District 46.9-acre property where the project is proposed. The agreement was a key component that qualified the county to apply for a $3 million Proposition 68 grant from the state.

The 46.9-acre property between the high school and the San Benito River consists of dirt trails.

Mike Chambless, San Benito County Resource Management Agency interim director, presented the design concept to the Board of Supervisors on Aug. 31. The design (see PFD below) is separated into two parts; initial priorities include constructing a parking lot, trails, exercise areas, about 10 acres of turf, a pump (bicycle) track and maintenance facilities. There would be Americans with Disabilities Act-compliant access throughout the park.

If funding is available, the county could also include a community garden, restrooms, pickleball and other sport courts, an amphitheater and softball field.

Chambless said that the design has a focus on dual programming and shared resources between the county and San Benito High School. Those features include a skate/rocket launch pad, physics slope and drop and geologic exploration area.

“We really tried to bring new recreational opportunities to the public,” Chambless said, adding that the concept design will be submitted to the state as part of the grant application.

He also noted that later in the process the costs of each feature will be identified, and mentioned that restrooms alone would cost about $1 million because they would require connections for water and sewer.

“If we get the grant funding it should be no problem affording it,” Chambless said about the restrooms. He added the county can install portable restrooms, though it wasn’t ideal.

Supervisor Peter Hernandez said the county should reach out to the San Benito High School District and private sector for a partnership to maintain the park.

“I would like to see concession stands, some kind of opportunity for private agencies to be able to help with this revenue generation and earmark those dollars back into the park,” Hernandez said.

He later added, “If we don’t have a game plan going into the future with private partnerships, I don’t see this park being sustainable, so I really want to make sure that’s included.”

Chambless said that keeping maintenance costs in mind, most of the park will be left natural because the county can’t afford to maintain it to city neighborhood standards where the entire park is landscaped.

“We went through this to design a park that can be delivered at a minimum of cost and a minimum of effort,” Chambless said.

Chambless said the design also took into consideration accessibility for the Sheriff’s Department to patrol the area and to prevent blind spots.

“You don’t build trails that go through bushes, etcetera, where people can get attacked,” Chambless said.

As for lighting, the county is considering solar options, but it depends on budget. He said his main goal is to light the sidewalk along River Parkway, but noted that the waitlist for PG&E to extend utilities to new facilities is years-long.

Hernandez, addressing Supervisor Bob Tiffany’s concerns about people living in the nearby riverbed, said lighting along the river bed is also important because it’s farther away from the roadways.

Chambless said that as a Hollister employee, he installed a new playground at the Vista Hill Park that was known for a spot used for things that are “not G-rated.”

“Never underestimate the power of a whole bunch of kids and parents because they cleaned that park right up,” Chambless said. “I would expect the use of this facility to cause that to happen also.”

Regional Park concept design would serve an array of interests