Residents turned out at a recent San Benito County Board of Supervisors meeting to encourage them to move forward on a cannabis growing ordinance as quickly as possible after the passage of Measure C. 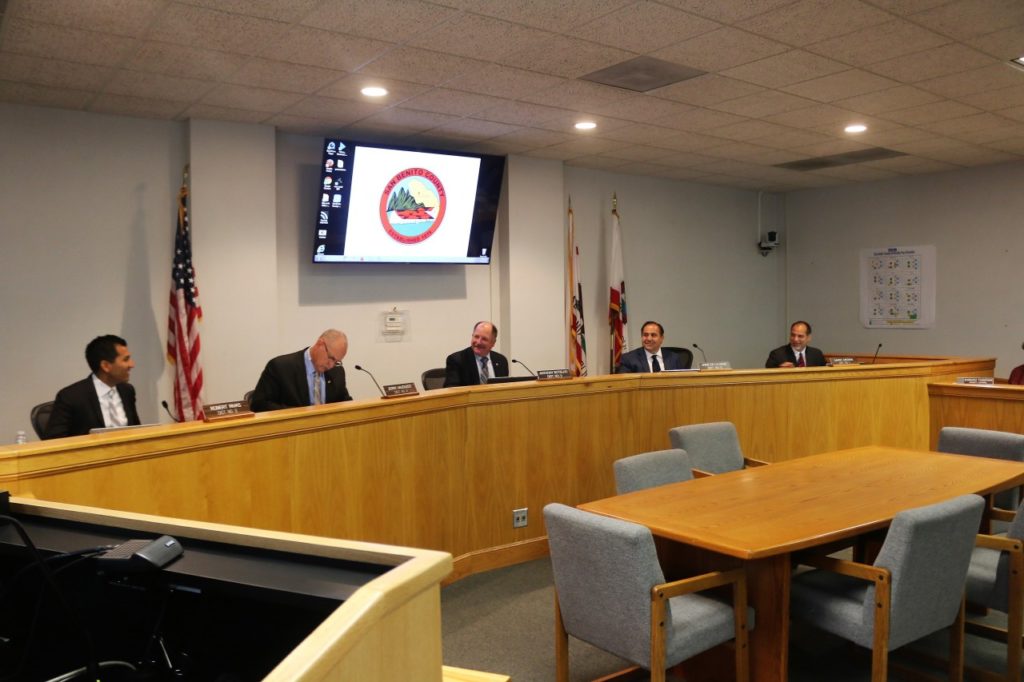 While San Benito County voters approved Measure C to create a tax for cannabis businesses located in the unincorporated area, it took little more than the weekend following the vote for supporters to show up en masse at the June 12 San Benito County Board of Supervisors Meeting to plead, and in some cases demand, that the long-delayed cannabis ordinance be placed on the next agenda. The Measure C tax will apply to both medicinal and recreational operations, but there is currently no ordinance on the books to allow for said operations.

Supervisors sent the cannabis business ordinance back to the ad hoc committee on July 18, 2017 to fine tune it, but it was simply a stalling tactic to wait and see what the voters would decide about Measure C. If Measure C were not to pass, then the supervisors would be off the hook and not have to make the decision on the ordinance, according to Supervisor Mark Medina.

By the June 12 county supervisor meeting, it was apparent that county voters, landowners, and cannabis entrepreneurs did not want to wait any longer for the ordinance.

South county rancher Lee Scazighini, who appeared before supervisors last March to ask that ranchers be allowed to grow cannabis to help save their operations, repeated his appeal at the June 12 meeting. He told supervisors that if they could start planting right away, the county could start receiving sales tax revenues by year’s end.

A cannabis cloning entrepreneur said if he sets up shop in the county, he would employ about 50 people. He said he preferred to do business in San Benito County rather than other counties because of the ideal climate, a ready workforce, and necessary infrastructure that is already in place. He said because he would be selling nursery clones rather than mature plants, revenues would be generated much sooner.

Attorney Aaron Johnson, who said he represented several cannabis applicants, highlighted issues in Monterey County to give supervisors an idea of possibilities for San Benito County. He told them of a legal grow that had contracted with an independent farm labor contractor who turned out to be involved in human trafficking.

“If it was not for the legal cannabis community that tip [to law enforcement] would not have come in to Monterey County,” Johnson said. He warned that as long as a black market operated in the industry, thefts of water and pesticide pollution would continue. “That changes as legalization occurs. We have an opportunity and the voters have spoken.”

Johnson said cannabis companies in Monterey County work continually with the county and law enforcement and the same can be expected in San Benito County that will drive the black market out of the area. Two-term city councilman and former Hollister Mayor Victor Gomez, now president of Pinnacle Strategy and a lobbyist for the cannabis industry, said he ran a positive campaign in support of Measure C.

“You are seeing the writing on the wall,” Gomez said. “The community is ready to move forward with an ordinance to allow cannabis operations in unincorporated San Benito County. A draft ordinance has already been written and may need some tweaking. Oddly enough, a lot of support I saw out there in the community came from [Supervisor] Jerry Muenzer’s district. I thought it would be more opposed, but ended up being highly supportive of Measure C. Please take into account what south county residents and ranchers are saying here today. We look forward to you agendizing this topic for discussion at your next meeting and wrap up this ordinance.”

Attorney Peter Brazil said he represented several cannabis operators who had to cease operations last year in order to comply with the county. He told supervisors the operators have substantial investments in the county and continue to wait for the ordinance to go into effect quickly. He said the minor tweaks needed to make that happen are readily solvable.

“I’m emphasizing ‘quickly’ because a lot of these operators are still invested in this county with mortgages on properties they may have purchased or leased structures,” Brazil said. “The longer this is delayed the more harm there is to them. They’re willing to sit here for due process, but there is a temporary licensing scheme within the state they will have to comply with that will only be available through January 2019, which is another reason to expedite this.”

Resident Dan Hudson asked supervisors to treat cannabis the same as any other crop. Competition is fierce and highly funded, he said, which leaves smaller operators at a disadvantage. He suggested an appellation approach, or geographical boundaries, where cannabis can be grown locally outside for maximum yields.

“Outdoor growing is something that could make us stand out from other counties,” Hudson said. “If you have a half-acre of cannabis in the middle of a wide-open field there won’t be any concerns about being a bad neighbor.”

Lana Blodgett, whose company Monterey Bay Alternative Medicine on June 4 received one of two permits to operate a medical cannabis dispensary in Hollister, also encouraged supervisors to expedite the ordinance.

“You’re creating a number of businesses from this multifaceted industry,” Blodgett said. “You’re going to see exponential growth, and the sooner that’s done the better the economy will be.”

Cannabis supporter Elia Salinas, who recently ran for San Benito County Supervisor District 4, said she voted against Measure C because the county has “…wasted months since the ordinance was written.”

“I request that the board agendize this for the next meeting and direct staff to work on an ordinance that has already been presented to the board and just needs to be tweaked,” Salinas said. “We are running out of time to plant in the spring.”

Salinas said while those who seek to obey the law ceased growing when told to do so, others ignored the county.

“The sheriff says his hands are tied,” Salinas said. “I think the sheriff should go out there and start enforcing. The black market continues to grow.”

Board Chair Anthony Botelho commented that supervisors should begin moving forward with the ordinance as quickly as possible.

Requests for further details on the potential cannabis ordinance sent to the entire board of supervisors and county legal counsel went unanswered.