After many years without a sit-down restaurant in Aromas, Sal Alvarez and family with Chef Marvin Romero opened the Aromas Grill on Wednesday February 6 to friends and family and the next day the restaurant was opened to the public. 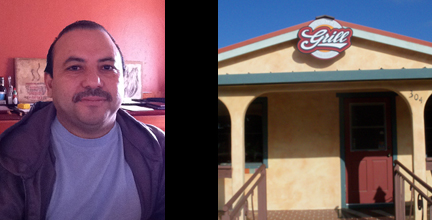 Chef Marvin Romero is a native of El Salvador; he immigrated to the US in 1981 and began a career in the food industry in Houston Texas that has lasted 32 years. In 1986 he moved to Monterey and worked as a Sous Chef at the Red Snapper (Now Gilbert’s on the Wharf), Highlands Inn and Spanish Bay. In 1991 he opened the Baja Cantina in Carmel Valley as Head Chef. In 1996 he helped open the Blue Finn Restaurant on Cannery Row and remained Head Chef for 10 years. According to Chef Marvin, during this period the Monterey County Health Department used the Blue Finn as a training restaurant for its new employees. As of this writing, a Monterey County Health Department Official offered praise, in the cleanliness of Chef Marvin’s kitchen, to a prominent Aromas resident.

Chef Marvin’s specialties are in the preparation of seafood, pastas and grilled meats. He provides some vegetarian dishes using only organically grown vegetables and he plans to grow his own herbs in a garden at the restaurant. He serves a thin crust pizza with artichoke, sun dried tomato and goat cheese; taste and aroma evoke memories of pizza served in Italy. The thin crispy crust satisfied my yearning for a Cicero’s Pizza (since 1968) located in Cupertino CA.

The fried calamari appetizer is unique in its preparation compared to most seafood restaurants and is served with two different dipping sauces. Bread is not served except with pasta dishes, but ask for a side of garlic bread with your appetizer or meal and it will be gladly served.

I sampled a slice of fresh baked Irish Soda Bread that will be served on St. Patrick’s Day; WOW, the bread is coming. Four beers are currently available on tap but owner Sal Alvarez plans to add a couple of Irish favorites for the holiday. Make reservations early if you plan to celebrate this occasion at the Aromas Grill.
Reservations: (831) 726-9999