Retired San Benito County employees at the Feb. 18 Board of Supervisors meeting stand to show support for a petition requesting full health benefits and reimbursement. Photo by Noe Magaña. 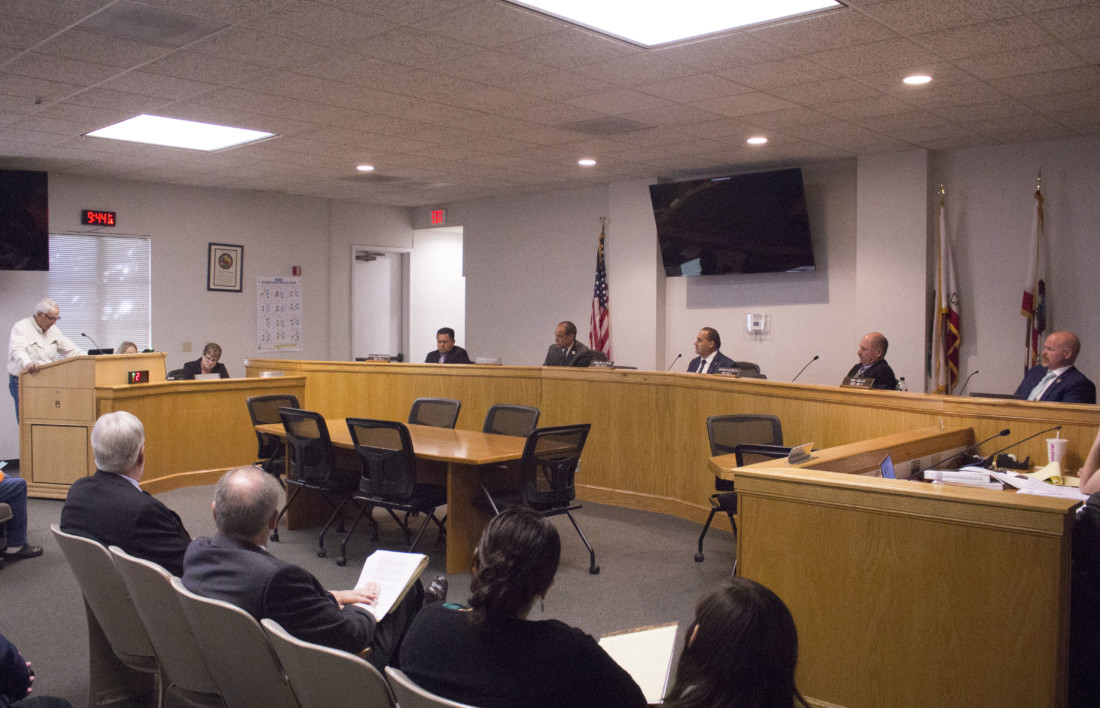 Retiree Donald Marcus addresses the board during the meeting and asked the county to honor its promise. Photo by Noe Magaña.
×

About a dozen retired county employees turned out for the San Benito County Board of Supervisors meeting on Feb. 18 to submit a petition demanding the board honor a promise made when they were hired to provide 100% lifetime medical benefits. Since 2017, the county has faced a lawsuit from two former employees alleging they were promised 100% health coverage for life.

The petition, signed by 72 retirees, also demands that the county reimburse all out-of-pocket health benefit costs accrued since 2015 and to allow representation for all health and pension benefit negotiations.

Katherine Shaw, a retired county budget management analyst, presented supervisors with the petition and said the county began to cap its contributions to retiree benefit packages following the county’s withdrawal from CalPERS—a public employee retirement system—in 2016, when out-of-pocket costs were transferred to retirees.

“Contractually, there should not have been any out-of-pocket cost to those hired before Jan. 1, 2010,” Shaw said.

According to Shaw, there are about 230 retirees affected by the withdrawal from CalPERS. She said the county did not have the right to cap retiree health benefits of employees hired before 2010. And while the county has cut health benefits since 2015, Shaw said, retirees did not know because there were no out-of-pocket costs until 2017 when the county joined CSAC Excess Insurance Authority, and because retirees were not represented during health package negotiations.

“It doesn’t really matter the amount that is out-of-pocket,” she said. “The bottom line is that was not part of their retirement package.”

Shaw told BenitoLink that retirees are going through their old employment contracts looking for language that addresses the verbal promises made upon their hire. Shaw said the attractive retiree health benefit package is what motivated her to leave Monterey County in 2009.

Retiree Donald Marcus, who served one term as District 1 supervisor in 2004, said the county offered attractive health benefits to retain and attract qualified employees because it could not match the high salaries offered in neighboring counties. He added that the board ratified the benefits by unanimously approving resolutions 2005-105, 2007-33.1, 2007-77 and 2008-110. In previous makeups of the board, Supervisors Jaime De La Cruz and Anthony Botelho voted in favor of the resolutions, except for the 2007-33.1 resolution where Botelho is marked absent.

“I feel that while these resolutions are most specific to the employer’s contribution to health care benefits, we all understood that we were reaffirming a promise made by the county to its employees to provide fully paid retirement health benefits for their employees and their families upon retirement,” Marcus said.

Deputy County Administrative Officer Edgar Nolasco told BenitoLink that the county does not have a resolution or a contract that implies 100% paid retiree health benefits. He said any changes to retiree benefits would need to be approved by a resolution and that benefits are negotiated during the negotiation process with labor unions with the Board of Supervisors approval.

Additionally, he said changes to retiree health or other post-employment benefits (OPEBs) are mandated by GASB 45, a new accounting standard that has been implemented since 2006 that requires public agencies to follow a specific process to fill their annual financial statements, OPEBs and pensions.

Retiree Pat Dunn criticized the county for not having representation for retired county employees during health benefit negotiations.

“One of the biggest problems is the changes to the retirees’ benefits were made by current, actively employed individuals: a three-member bargaining team, one with SEIU, and of these three members two of them received a stipend from the county,” Dunn said.

Shaw told BenitoLink the other two members that bargained were Management Employment Group and the Deputy Sheriff’s Association.