Villagers who built the latrine project in the Mathare Valley. Courtesy of Rev. Havens and his wife Lani. A women's fishing project on Lake Victoria. Courtesy of Rev. Havens and his wife Lani. 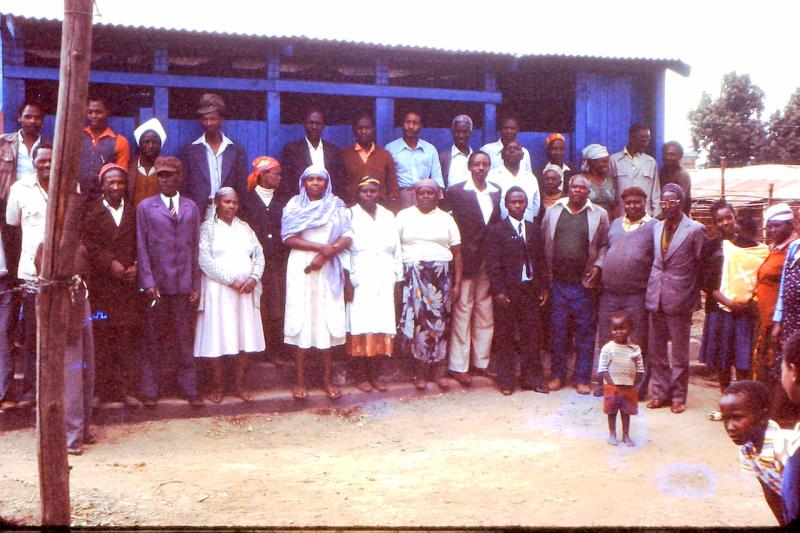 Villagers who built the latrine project in the Mathare Valley. Courtesy of Rev. Havens and his wife Lani.
×

Time on the African Continent, New Opportunities, and Retirement Plans: 1982-2001

In 1982, the last of the Havens’ children entered college. And as Lani explained in an interview, she and Rev. Havens began asking themselves, “What do we do with our lives?” (1) The couple began mailing résumés to various organizations, marketing themselves as a “package deal.” (2) With Rev. Havens’ experience as a community organizer and Lani’s doctorate in Environment and Human Behavior and her experience teaching human factors in planning and design, it wasn’t long before they received a call from an interested party—the Disciples of Christ.

Rev. Havens had reluctantly agreed to send their résumés to the Disciples. Its failure to lend assistance and support following his arrest in 1965 had left a bitter taste in the reverend’s mouth.

Despite the acrimony, Rev. Havens took the call and listened to the opportunity that would shape the next six years of his and Lani’s lives.

The Disciples explained that the National Council of Churches of Kenya (NCCK), an ecumenical organization comprised of Protestant churches throughout Kenya, was looking for individuals with the type of experience and expertise of Rev. Havens and Lani.

Established in 1913, the NCCK’s mission is to” [p]romote fellowship and…nurture a common understanding of” Christianity, while enhancing, “the creation of a just and sustainable society,” according to the organization’s website. The NCCK had been instrumental in developing the infrastructure following Kenya’s independence in 1963.

Nearly 20 years later, the NCCK was in desperate need of program evaluators to determine the success of its multi-sponsored projects.

Husband and wife accepted the job and flew to Africa—the continent where years earlier Rev. Havens’ parents had served as missionaries in the Belgian Congo.

When Rev. Havens and Lani arrived with a large, cumbersome, 80s-era videocamera, the couple’s job description suddenly changed from evaluators to documentarians. Needless to say, the couple was surprised, especially considering that neither knew how to power on the camera. They soon figured this out and, according to Lani, they “were basically on safari” for several months, documenting “projects of every stripe” throughout Kenya. (3)

Among the projects Rev. Havens and Lani filmed were: 1) the resettlement of the Maasai, an indigenous African tribe of Kenya and Tanzania, whose lives were threatened as a result of desertification; 2) a women’s fishing project on Lake Victoria; and 3) a latrine project in the Mathare Valley that Rev. Havens played a role in getting started.

When Rev. Havens and Lani arrived in the Mathare Valley—a slum located near Kenya’s capital Nairobi landscaped with cardboard and corrugated metal shacks and punctuated with fetid air—citizens were discussing ways to address a recent cholera outbreak. Some in the group suggested seeking government assistance, while others offered nothing—their voices muted by abject poverty.

A veteran of community organizing, Rev. Havens told the assembly “you need to build your own outhouses…you need to do it yourself” because the government wouldn’t fund a project in an area it wanted to “burn down”. (4) The locals listened and decided to take the reverend’s advice, analyzing and evaluating the necessary time, resources, and effort needed to complete such a project. For their part, the Havens’ secured some funding through the NCCK. Soon, a concrete “ten-hole” latrine became a fixture in the Mathare Valley and a true example of community involvement, according to Rev. Havens. (5)

At the end of their six-month sojourn through Kenya, Rev. Havens and Lani had a plethora of film chronicling their experiences. Hours were spent editing the film, another skill they haphazardly learned while in Africa. Later the film was featured at a gala hosted by the NCCK and attended by several African and world leaders.

Reflecting on their time in Kenya, Lani stated that she and Rev. Havens “were blown over by Africans…they were an inspiration every single day, and their creativity around desperate situations…absolutely admirable.” (6)

After four years with NCCK, the couple decided to change course.

They approached Church World Service (CWS), a Protestant and Christian Orthodox organization formed in the U.S. after World War II in response to the devastation in war torn Europe, and more specifically, to “[f]eed the hungry, clothe the naked, heal the sick, comfort the aged” and “shelter the homeless,” according to its mission statement on the organization’s website.

Over the years, CWS expanded its mission globally, establishing offices throughout Africa, including Kenya.

In 1986, Lani and the reverend walked into the CWS’s Nairobi office, presenting themselves once again as a “package deal’” specializing in program evaluations. The couple was hired on the spot. And unlike their tenure with NCCK, Rev. Havens and Lani set out to do what they were hired for—traveling to countries on the Horn of Africa and the island-nations of the Seychelles and Madagascar and evaluating CWS’s programs.

One of the programs the pair learned about during their two year stay with CWS was was Trickle Up, an non-governmental organization established in 1979 by Glen and Mildred Robbins Leet. Rather than a trickle-down approach to combating poverty, an often nefarious endeavor in developing countries where government funds earmarked for antipoverty programs often disappear into the depths of corruption, Trickle-Up strives to fight poverty at its root, providing individuals with $100 grants, business training, and other support in an effort for them to “launch their own microenterprises,” while paving the way for “social and financial empowerment,” according to its website.

The couple was fascinated by Trickle Up’s approach and its seeming success combating poverty. Lani was so intrigued by this that she secured a grant through the Ford Foundation to evaluate Trickle Up. What she found shocked both she and her husband. Remarkably, Trickle Up success rate was over 90%. (7) In other words, a very small investment reaping huge dividends in Africa and elsewhere.

Lani’s work in Africa quickly caught the attention of other international organizations, including the United Nations. The United Nations Development Program (UNDP) contacted Lani and enlisted her help in developing a business skills, training manual for areas where illiteracy was a major obstacles to entrepreneurship.

Relying on the experience she gained in Africa and her familiarity with African culture, Lani produced a book full of vivid images laid out in a storytelling format. The training module’s success resulted in its translation into over 20 languages. (8)

In 1988, the Havens’ returned to the states. Their work with CWS and Trickle Up presented both with leadership opportunities within each organization.

Lani was hired by CWS as its executive director. After her tenure with CWS, she became a program evaluator for the Peace Corps, a position she held until her retirement in 2001.

Rev. Havens became executive director of Trickle Up, and later did consulting work in Washington, D.C., while Lani served in the Peace Corps.

After Lani’s retirement, the couple had planned to spend their golden years on the open water, sailing around the world aboard their ketch, Ishmael. But the terrorist attacks of September 11, 2001 forced the couple to reconsider their plans. For now, the two would, like their beloved Ishmael, remain dry-docked. The only question was, where?