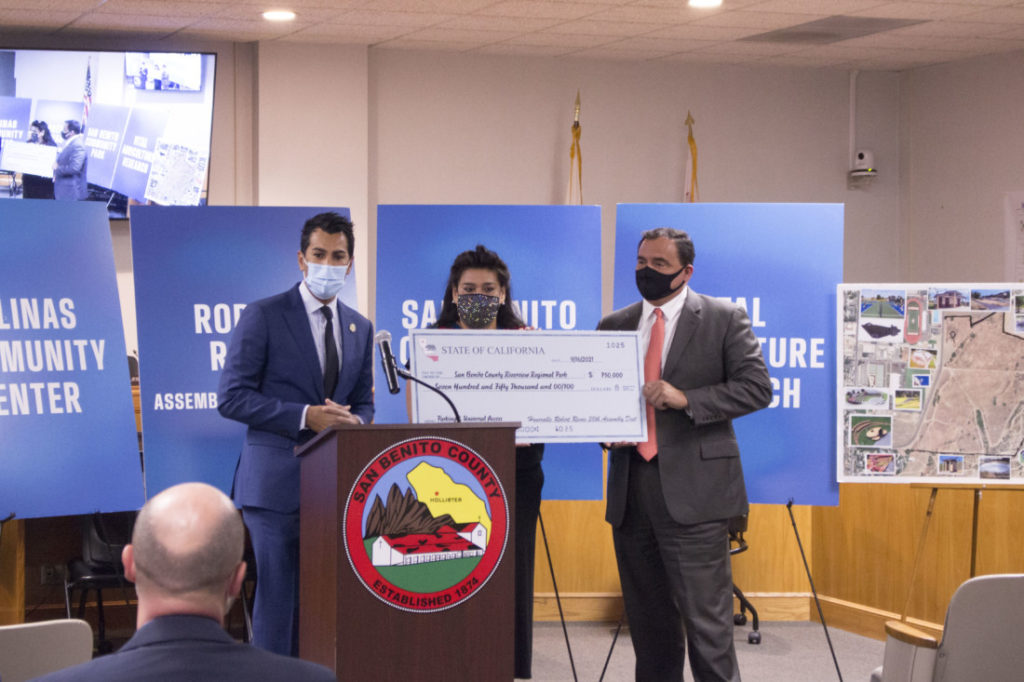 Editor’s note: Information about a community meeting was removed as it pertained to a different park project located at County Service Area (CSA) Sunnyside.

As part of a mini tour announcing $15.85 million in state funding for community enhancement projects, Assemblymember Robert Rivas said on Sept. 16 that he had secured $750,000 for the proposed Riverview Regional Park.

Other projects in his district that were allocated funding include:

Rivas told BenitoLink that projects are funded based on priority. He noted that he submitted a list of projects throughout the 30th district but only few were selected for funding. He said the Legislature looks to fund projects that are shovel-ready.

Anita Kane and Robin Pollard, board members of R.E.A.C.H. San Benito Parks Foundation, an organization that has been a principal advocate for a river trail and other parks, said they hope this “seed money” will attract more funding for the project.

“It’s certainly not enough but it helps with this first kick-off and that will put eyes on it and get people enthusiastic about it and that hopefully will bring support for the big money that will be needed,” Kane said.

For R.E.A.C.H. the project has been a long time coming.

“I know 22 years ago there was a meeting and they talked about having this regional park and this trail,” Pollard said. “To actually have the city begin with the Apricot Park trail and this coming together, hopefully in the next 20 years it’ll be finished and we’ll all be using it. I’m loving it.”

Rivas, a former San Benito County Supervisor, returned to the chambers where he served eight years to talk about the project.

“Logistically we’re getting close but now we have to get it done,” Rivas said. “A lot of planning and work has been invested in this project and this is going to be a true amenity, a positive project, not only for San Benito, the city of Hollister but for our region.”

In his comments, Rivas highlighted the importance of local governments having projects shovel-ready to obtain state and federal funding, as well as having advocacy for those projects. San Benito County hired a lobbyist firm on April 13.

“We have lobbyists that walk through our doors everyday,” Rivas said. “Jim Gillio was the biggest advocate when he was on the Board of Supervisors. I saw him more than anybody. Having that advocacy is important.”

R.E.A.C.H board member Valerie Egland also addressed advocacy during the press conference saying San Benito County was late to the table in having a lobbyist and grant writers.

“We left the money on the table until now, but we see a new day dawning,” England said. “Through the teamwork of all our elected officials, the parks and recreational needs of this county can be fulfilled. Parks and recreation, biking and walking trails are the ground zero for health and wellness for our community.”

She said the $750,000 allocation is important because otherwise it would have been taken out of the general parks fund, limiting how much immediate work the county can do on the project.

“It really softens the blow to our budget, having that money,” England said.”It allows us to expand quicker, better, faster.”

Rivas also told the public, which included three county supervisors—Bea Gonzales, Bob Tiffany and Kollin Kosmicki—that it was important that the county do a better job of working together with each other and with other jurisdictions to rebuild the confidence in local government. Supervisor Peter Hernandez joined the group at the site of the Riverview Regional Park.

“One issue I see in this community, it’s a small community but we don’t always get along,” Rivas said. “And when we get along it’s to the benefit of all the people who live here and that’s why this is a perfect example of agencies, whether it’s San Benito High School or the county, coming together.”

Working together has proved to be a challenge for the current Board of Supervisors and Hollister City Council who at times have gotten into heated arguments. More notably the City Council has reached a point where they throw unsubstantiated accusations of special interests at each other, staff and members of the public.

Regarding the park, Gonzales said it was important to work to make it inclusive for all residents and that it will be a “legacy for generations to come.”

Resource Management Agency interim Director Mike Chambless told Rivas and later confirmed to BenitoLink that the county’s purchase of a 21.1 acre property directly south of the proposed park area fell through in the last day of escrow. The county had agreed to pay $700,000 for the property that was appraised at $1 million. 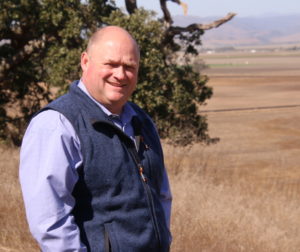 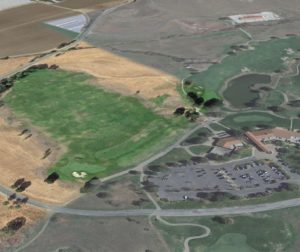 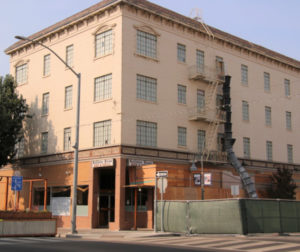