Activities and discussions about stereotypes set scene for training. 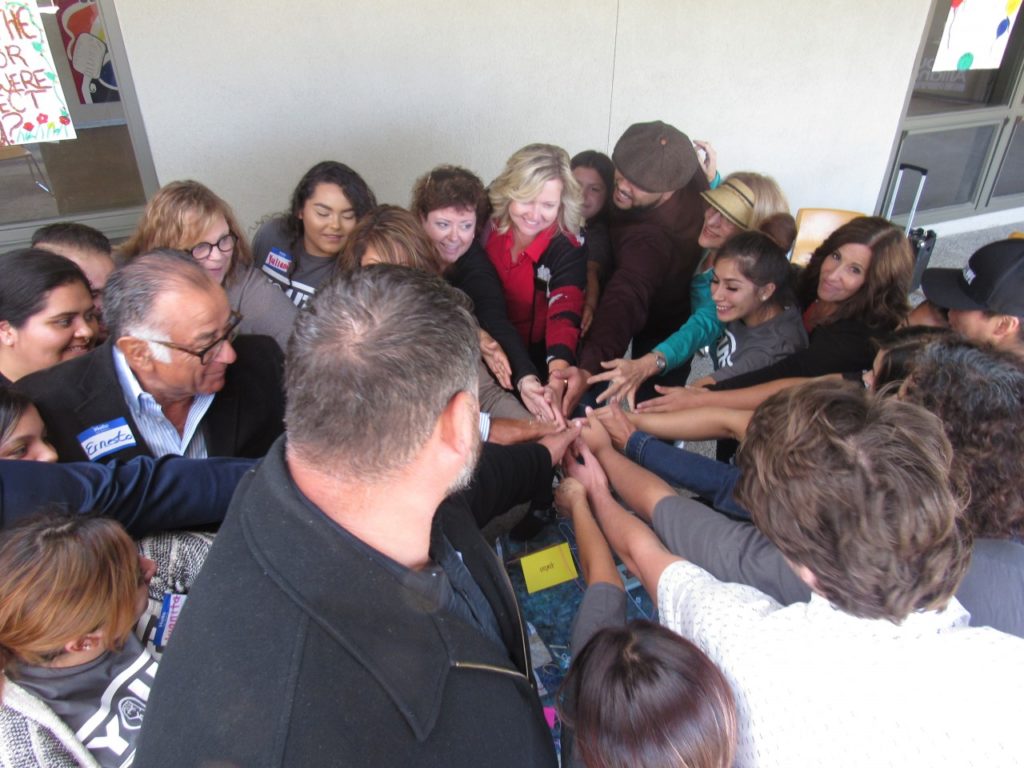 Participants of the activities gather before a lunch break. Photo by Noe Magaña. Several members of the community got a crash course in restorative justice practices during a teach-in event at San Andreas Continuation High School on Oct. 24.

Youth Alliance, in partnership with the San Benito County Office of Education and San Andreas High School, hosted the event as part of Dignity in Schools Week of Action 2018.

Restorative justice is a practice that deviates from the punishment model and focuses on discipline through understanding and communication.

According to its website, restorative justice "emphasizes accountability, making amends, and — if they are interested — facilitated meetings between victims, offenders, and other persons.”

“I think restorative justice is important because we are restoring relationships and working to repair homes and working to bridge that connection between adults and young people,” Youth Alliance Executive Director Diane Ortiz said.

She said the training for parents, teachers and administrators builds a deeper connection, understanding of experiences and situations, and empathy of young people to help them succeed in life.

About 20 people attended the event and participated in activities that sparked conversation about stereotypes. San Benito County Superintendent of Schools Krystal Lomanto and San Benito High School Principal Adrian Ramirez were among the attendees.

“One of the hard things for people is trying to understand what the heck restorative practices is all about,” said Julius Mills-Denti, a restorative justice specialist and family liaison with Youth Alliance. “They can kind of make sense of it conceptually, but they don’t understand the exact practices.”

This is the second year the restorative justice event has taken place at San Andreas Continuation High School. At the start, attendees sat in a circle and placed items of personal significance into the center, which consisted of a blanket with several folded colored sheets of paper with words like “fairness” and “respect” written on them.

Photographs, bracelets, necklaces, wedding rings and keychains were among the objects placed in the center while attendees shared why the objects were special to them.

In another activity, the group shared stereotypes or names they’ve been called, which ranged from ethnic labels to social behavior expectations.

In a smaller group activity led by the Youth Leadership Group, members created circles and asked each other questions to create dialogue regarding stereotypes while passing along yarn to create a big web. Some of the questions were: Why do people stereotype others? How can we get rid of stereotypes? Have you ever stereotyped anyone else? At the end of the activity, the groups shared their conversations with the other participants.

Before breaking for lunch, several members thanked the organizers and Youth Leadership Group, saying they were impressed with the level of conversation the event sparked.

The event concluded with a powerpoint presentation on the concept of restorative justice, led by Mills-Denti.

During the presentation, Mills-Denti shared a survey of San Andreas students in seventh to 11th grade that participated in the first year of restorative justice practices. The survey of 14 students showed the majority felt satisfied with resolutions in conflicts with other students.

At the end of the event, Lomanto thanked everyone involved and called restorative justice not a program, but a long-term mindshift that gets away from the standard model of behavior correction.