Supervisor Mark Medina wanted the public to know of the collaboration between the Hollister City Council, San Benito County Board of Supervisors, and the San Benito High School District. Photo by John Chadwell. The bypass will be built south of the San Benito High School campus. RMA photo. The San Benito High School District is giving San Benito County 40 acres for the park to be built along river. RMA photo.

The project includes a bypass road around San Benito High School and a water pipeline. Sunnyslope Water District will reimburse the county for the pipeline. 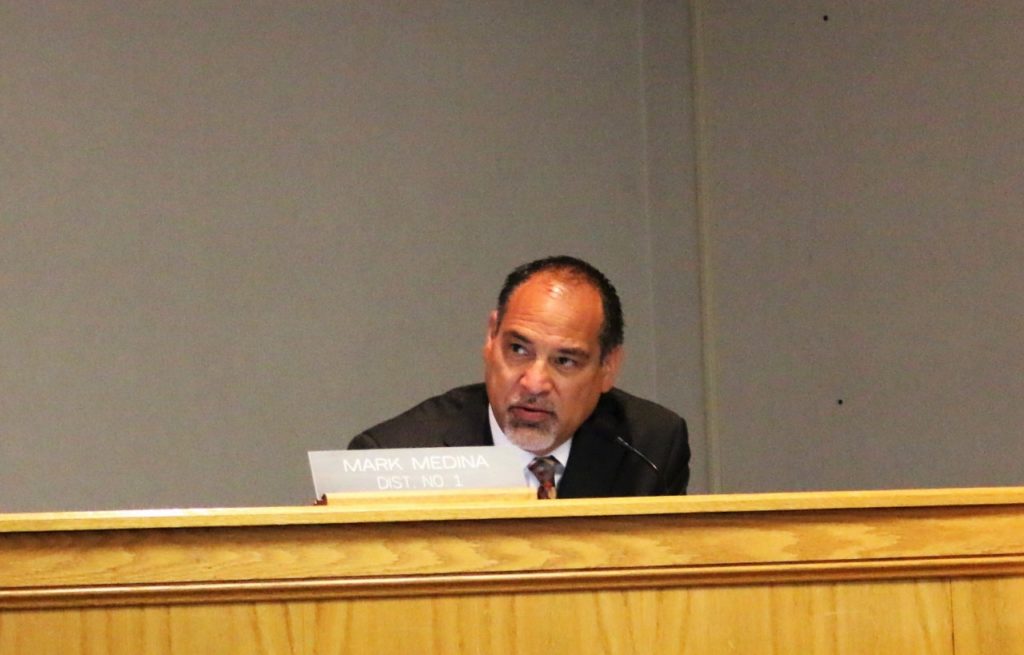 Supervisor Mark Medina wanted the public to know of the collaboration between the Hollister City Council, San Benito County Board of Supervisors, and the San Benito High School District. Photo by John Chadwell.
×

At a May 15 special meeting, the San Benito County Board of Supervisors awarded a $1,921,209 contract to Don Chapin Company for Phase 1 of the River Parkway project.

During the first phase, the Salinas-based construction company will build an access road around the San Benito High School campus south of the football stadium, to intersect with Nash Road west of the school. The contract also includes constructing a pipeline for Sunnyslope County Water District, for which the district will reimburse the county, according to Capital Projects Manager Adam Goldstone.

During the Tuesday morning meeting, Supervisor Mark Medina wanted to clear up some confusion he heard about the project over the weekend. He said the project, also known as the Nash Road bypass, is being built to help provide a safe environment for the high school students by closing Nash Road between Monterey and West streets during the school year.

“In return, we’re also receiving some property [approximately 40 acres] from the high school,” Medina said. “I wanted to make sure we look at the total project because it’s a perfect example of collaboration between the high school and us working together. I just wanted everyone [to know] that this is not just us approving $1.9 million. This is a collaboration between all entities. It can happen.”

“For us it was the regional park, for the high school it was a tighter campus that’s more walkable, and for Sunnyslope Water District it was making a key connection to their service lines,” Botelho said. “It was pretty complex and took some time to get through it.”

“This is a discussion we had in 2011, but we still have a ways to go,” Rivas said. “We still have to lean on our partners, the City of Hollister and the school district, to make sure this road is completed.”

The road is more than just access to River Parkway, Rivas continued.

“It’s about the safety of 3,000 students who cross Nash Road to access various parts of the campus. Besides the changes we’ve seen at the high school recently, this is going to be a huge piece to reconfigure the campus in a very positive way.”

“It shows the true willingness of partnering in our county,” Tennenbaum said. “When we look back at this 25 or 30 years down the road we’ve paved the way for generations of students to be safe and to have one of the most exquisite and walkable campuses, as far as the Central Coast is concerned. This means a lot to show that we can work together in the best interest of our students and our community.”

Goldstone said the exact date construction would begin is not known, but typically it takes a couple weeks to complete paperwork and get work crews together. Once work begins, according to the contract, the road is expected to be completed within 120 days.