Library first began in the basement of the old county courthouse. 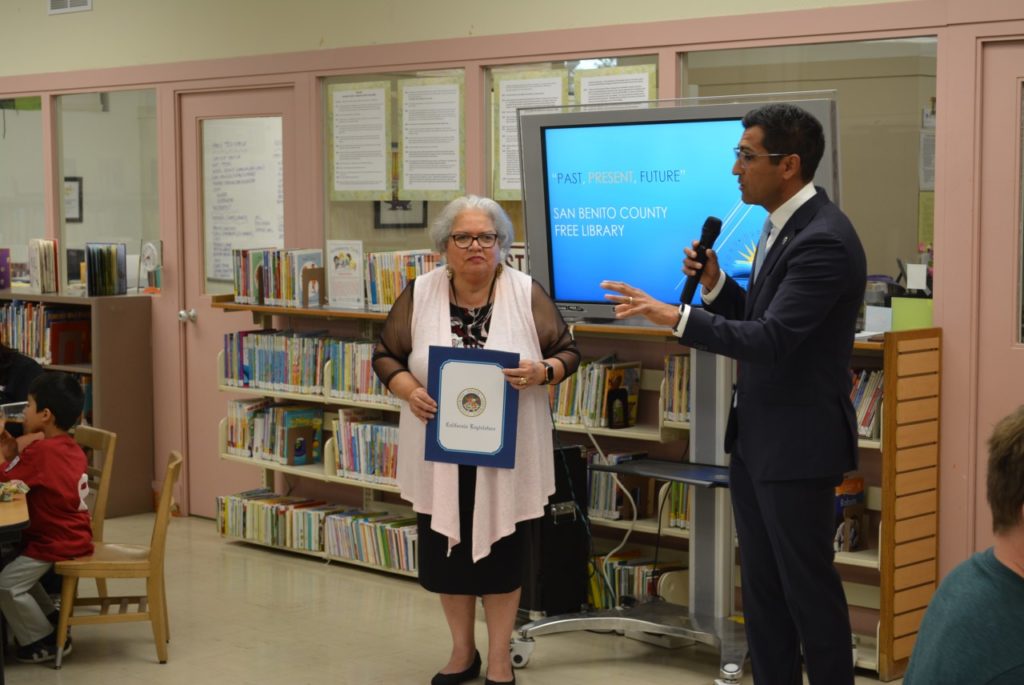 This article was contributed by the San Benito County Free Library.

The San Benito County Free Library celebrated its first one hundred years of service recently with an evening of food, fellowship and fun.

Founded in February 1918, the library began humbly in the basement of the old county courthouse. In those days and for decades to follow, boxes fastened to trees served as book drop-offs in rural areas. In 1959, a decision was made to consolidate the County Library with the Hollister City Library. Following this consolidation, the library moved into a newly-constructed building in 1960. The library remains there today. In 1980, the Friends of the San Benito County Free Library formed and began providing invaluable support and resources to the library.

Shortly thereafter, the library acquired its first bookmobile to serve those unable to easily reach the collection. In 1983, thanks to a generous contribution from Mr. Poppic, the building expanded into the footprint it occupies today, including the Barbara Room (a meeting room named for Mr. Poppic’s late wife). Since 1983, the library has continued to serve the expanding community with increased technology offerings and evolving accessibility.  As the evening’s festivities made clear, there is much to celebrate about the library’s 100-year career.

Supervisor Gillio presented Susan Logue, president of the Friends of the San Benito County Free Library and volunteer for the Library’s Adult Literacy Program, with the library’s Volunteer of the Year award. Assemblyman Robert Rivas was in attendance and spoke of the importance of supporting libraries before presenting the San Benito County Free Library with an award of recognition for its first 100 years of service. A trio of speakers next presented perspectives of the library from the past (Ruth Erickson, Library Historian), present (Erin Baxter, Assistant to the County Librarian), and future (Tami Aviles, Co-Chair for a New Community Library & Resource Center).  Finally, County Librarian Nora Conte closed the celebration with remarks about hope and gratitude.

One thing was clear: even as the library paused for an evening to celebrate its past, its collective eyes were focused on its future. One-hundred years is a long stretch of time, but at San Benito County Free Library it is just a beginning.