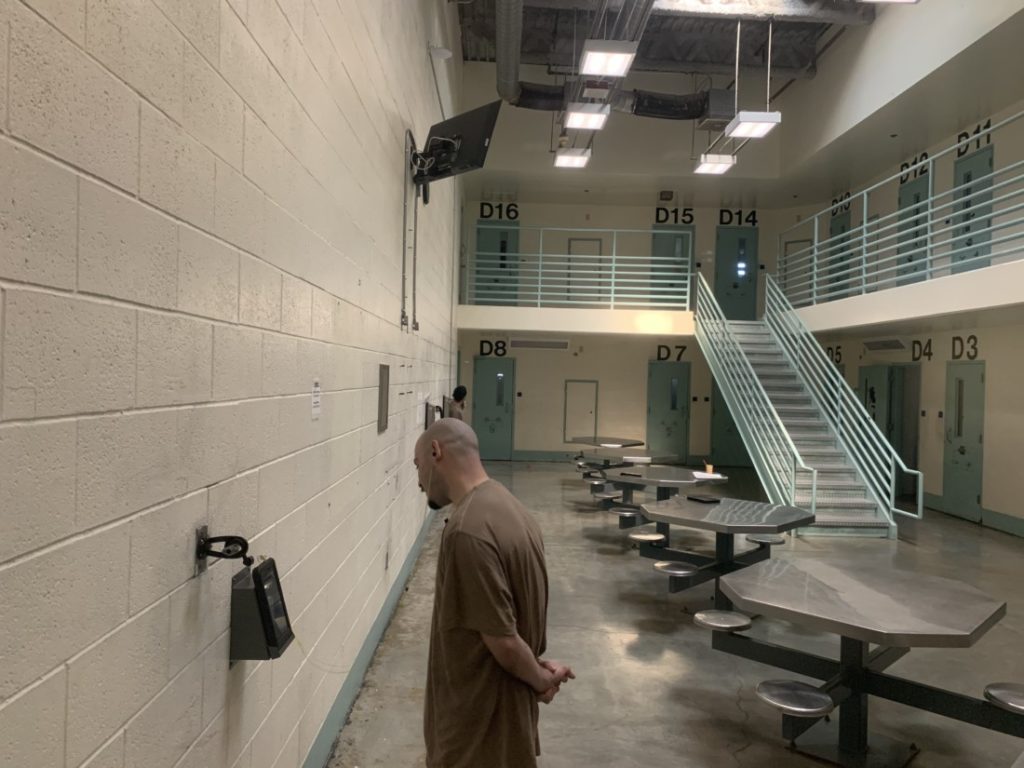 File photo of an inmate on a video call in 2020 when in-person meetings were prohibited because of COVID-19 restrictions. Photo courtesy of San Benito County Jail. 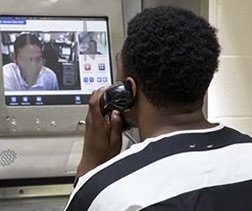 Communications with the outside world have been recorded for years. Now a new software has been added aimed to prevent suicides. Photo courtesy of the San Benito County Jail.
×

What do the National Security Agency, Facebook, and the San Benito County Jail have in common? Software and algorithms to monitor people.

In the case of the NSA, the spyware is code-named Quantum Insert that has secretly spied on hundreds of thousands of Americans. Facebook users voluntarily give up much of their personal information just by opening an account. It constantly tracks their online behavior through algorithms.

The county jail began using a software called Verus, which is not meant to spy on people because those inmates calling out or receiving incoming calls are told their conversations are being recorded, according to Sheriff Eric Taylor. Though Verus can be used on occasion as an investigative tool, it is primarily one that is meant to save lives, he said.

With the spread of tech in everyday life, privacy and free speech issues abound. There is, however, no right to privacy for inmates in jails and prisons, said Taylor. This is supported by Hudson v. Palmer, where the Supreme Court ruled that prisoners have no reasonable expectation of privacy in their prison cells entitling them to Fourth Amendment protection.

The American Civil Liberties Union did not respond to BenitoLink’s request for a comment on its position on monitoring inmate phone calls.

Taylor told BenitoLink that other than approving funding for the jail, county supervisors have no role in running it, and that federal and state law governs inmate communications.

“Every single phone call in every single jail or prison in the United States is monitored,” he said. “There’s a warning when you call in and you have to opt into it.” This does not include their lawyers, who come to the jail to speak to the inmates in person in private rooms.

Taylor said he implemented the Verus software from Leo Technologies six months ago. He said the intent of the technology is to listen to and “scrub” all inmate phone calls as it seeks out key words or phrases that might indicate the individual is contemplating suicide.

“We preload it with phrases like ‘kill myself,’ ‘hang myself,’ or ’can’t go on,’” Taylor said.

Taylor said all phone conversations and text messages from jail-provided landline phones and tablets are provided by GTL, which provides inmate call services. He said inmates and those they are talking to on the outside must opt-in and are told their conversations, texts and emails will be monitored. At this time, only the phone calls are being monitored by Verus. If the inmate does not opt-in, they cannot communicate electronically, but only through in-person jail visits.

Jails and prisons have had the ability to record phone conversations for years, but, for the most part, law enforcement staff would listen to them after the fact, Taylor said. He said Verus is different in that it constantly searches for the key phrases in near real-time. Once it detects a key phrase, an alert is sent to the jail staff by text message.

“In that moment, it will alert us, direct us to who said it, and we’re able to intervene,” Taylor said. “We have had two or three alerts where we’ve been able to interact with inmates and make sure they’re getting the treatment they need.”

The process is to have staff take the inmate aside to assess their mental state before bringing in someone from the county’s behavioral health department to do a follow-up interview.

“If the person truly is suicidal, we’ll start a plan and perhaps have them evaluated by a medical professional,” Taylor said. “We may put them in a safety cell, or they may just need some counseling. There may be a medication issue.”

Taylor said even though the inmates have been told their conversations are being monitored, the staff does not continually remind them that it is being done.

“It’s not a secret,” he said. “The ones we’ve interacted with, we tell them how we know what they said.”

Taylor described Verus as a “plug-and-play” technology. Leo Technologies installs it electronically “on top of the software that is already monitoring conversations” and hosts the software offsite, but does not monitor it themselves. He said the company is using the jail as a beta tester to upgrade it to include the capability to monitor text messages and emails. He said a former colleague who works for Leo Technologies brought the software to his attention.

“We tested it and now fund it through our crisis taskforce and outside the general fund,” he said, adding there was no cost to start up the program, after which the jail is now billed on a per-minute basis. “So the cost varies. Now we’re going to beta test this new technology for the company at no cost to us. If it’s successful, it’s figured to roll out nationwide.”

If you or anyone you know is contemplating suicide or experiencing emotional distress you may call 9-8-8 for help or the Suicide Prevention Service at 1-877-663-5433.