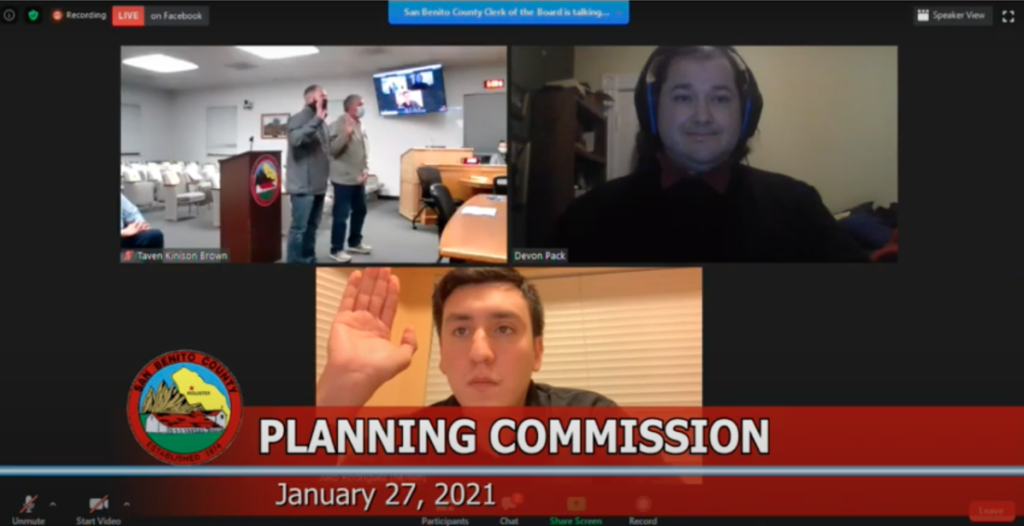 Four new San Benito County planning commissioners were appointed by the Board of Supervisors on Jan. 12. Julio Rodriguez, Robert Scagliotti, G.W. Devon Pack and Robert J. Rodriguez will join the commission; Robert Gibson is the only returning commissioner.

Julio Rodriguez, appointed by District 2 Supervisor Kollin Kosmicki to serve a five-year term, lost his bid for the Hollister City Council District 4 seat to Tim Burns on Nov. 3. He is a paraprofessional working with special needs students and is pursuing a degree in urban planning at San Francisco State University, according to his application.

At the Jan. 12 meeting, he was the lone appointment to receive any opposition. Hollister residents Elia Salinas and Mia Casey (co-founder of San Benito Citizens for a Brighter Future) voiced concerns regarding his position on growth as well as his experience in planning.

“I have to say that while he was running for City Council, I did engage him a number of times on Facebook to ask questions about growth and planning,” Casey said. “I felt that his responses were lacking and when I had questions he was actually kind of rude and said that I must be for growth because I asked questions. And I want somebody who is unbiased.”

Defending his appointee, Kosmicki said he was an exemplary candidate who is thoughtful on his perspective on growth and one of the most experienced applicants.

“I’ve personally talked to Julio about the role of the planning commission and objectivity and prejudice and all those things,” Kosmicki said. “But I will say if you are going to exclude somebody who has spoken out on an issue, then I can’t imagine almost anybody would be eligible for these roles. I would assume, maybe I shouldn’t assume, but maybe some of the other candidates for Planning Commission probably had viewpoints on Measure K or the nodes or whatever it might be.”

He later said, “I have no doubt that Julio will be objective and he’ll do a great job.”

Kosmicki clarified to BenitoLink that though his appointee was the only person to submit an application to the county, he spoke to about six other potential candidates. He said he chose him because he is reliable, credible, trustworthy and aligns with his views on growth.

Clerk of the Board Jennifer Frechette told BenitoLink she received only one application for each of the districts for the Planning Commission.

Supervisor Bea Gonzales also shared the concerns of Salinas and Casey, but said she could support the appointment as long as Kosmicki could ensure his appointee would be objective when considering projects as a commissioner.

Scagliotti was appointed by Supervisor Peter Hernandez to a two-year term ending in December 2022. Scagliotti stated in his application that he is a farmer.

San Benito County has previously had two Scagliottis on the dais. Joseph Scagliotti was elected to the Board of Supervisors in November 1960. Richard Scagliotti was elected to the board for four consecutive terms beginning in November 1988. He has a controversial past as he was sued in 2003 for using his authority as a supervisor to advance his financial interests. The county is currently in a lawsuit against Richard Scagliotti trying to recoup attorney fees for his legal representation. According to a 2015 Hollister Freelance article, the county spent $585,000 in outside legal fees.

Robert Scagliotti did not respond to BenitoLink’s request for comment on his appointment.

Pack was appointed by Gonzales to a five-year term that ends in December 2025. He is an elections officer on a temporary basis, and has worked as a paralegal and legal assistant.

“My interest lay in sustaining and improving the livability of our community, in ways that bolster quality of life for all San Benito residents,” Pack said. “The challenge lays in striking a balanced, holistic and inclusive approach that reckons the need for growth and improvement against preserving the many good things that we enjoy in San Benito—a healthy environment, abundant agriculture, and an involved and active community.”

Robert Rodriguez was appointed by Supervisor Mark Medina to a five-year term to represent District 1. He is the son of a former commissioner by the same name whose term ended last year.

Gibson was re-appointed by newly elected Supervisor Bob Tiffany, whom he ran against in the District 4 supervisor race in November.

“Robert has done an excellent job in my mind for the community, for the county, in the last two years that he served in that role and I look forward to having him continue in that capacity representing District 4,” Tiffany said.