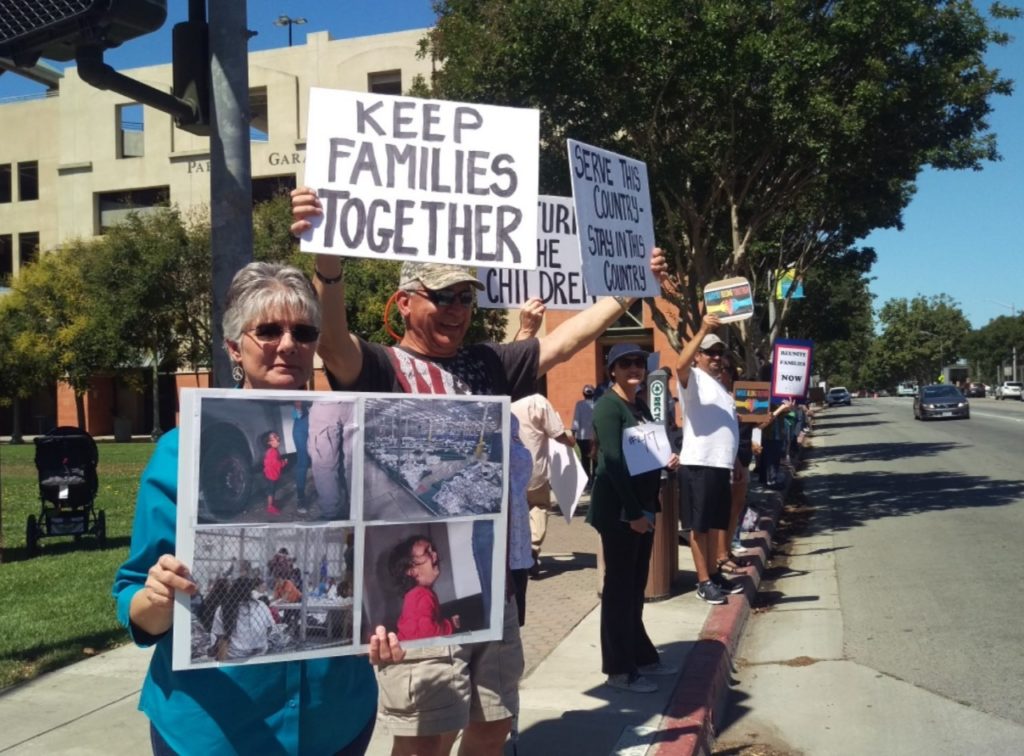 The Saturday, June 30 protest in Hollister was one of over 600 across the nation. Photo by Becky Bonner. Residents of San Benito County joined together with over 600 cities nationwide Saturday, June 30 to protest President Donald Trump’s immigration policies, most notably the separation of children from their families.

Over 90 people attended Saturday's protest at the corner of Fourth Street and San Benito Street in downtown Hollister, according to event organizers Monica Quiroz-Rivera and Jacob Rivera. Among the people protesting were educators, families, business owners, and the elderly.

Learning of Trump's policies regarding family separation, Quiroz-Rivera and Rivera felt inspired to join the nationwide protests by bringing an opportunity for people in the community to peacefully assemble in Hollister.

Rivera, who currently attends Gavilan Community College, is Quiroz-Rivera’s grandson. While Rivera said he felt the protest in Hollister was necessary, he wanted to join Saturday’s event because felt American values were no longer being upheld.

“It’s anti-democratic to split families apart at the border," Rivera said. "It creates hysteria in the American fabric. I think a lot of people have lost their empathy for immigrant families because it’s not their kids.”

While political ideology inspired Rivera to take action, it was a nationally recognized image that inspired Quiroz-Rivera.

“It was the picture of the little girl crying in the red top,” Quiroz-Rivera said. “I saw my own daughter and I thought ‘Oh my. That can’t be happening in the United States.’”

Pamela Witherspoon, owner of The Beauty Lounge in Hollister, was also affected by images that she saw. When discussing what motivated her to join the local protest, Witherspoon was moved to tears.

“As a mother it breaks my heart that these babies can’t be soothed,” Witherspoon said. “To me it should not be about the [political] parties. It should be about humanity.”

Sue Burke, a San Benito High School teacher who lives in Aromas, said she chose to protest in Hollister as opposed to a major city in support of her students.

“A lot of my students are immigrants or their families are immigrants,” Burke said. “I want them to know the words and policies of the current administration do not represent everyone.”

While talking to BenitoLink, Burke also stated that throughout her lifetime she always believed that America stood for human rights, but in recent times she felt actions taken by the government deviated from that course.

“It’s using children as tools to parents who are trying to migrate," Burke said. "It’s so abusive. It’s not something I ever would have imagined my country to do.”

Though people at the protest expressed a common sentiment of disbelief and anger toward Trump’s immigration policies, the event inspired many.

Attendee John McDonald could be seen taking photos of the protest.

“I think these kind of movements need to be documented and shared," McDonald said.

McDonald also expressed feeling a connection in the community as the group experienced support from vehicles passing by the busy downtown corner.

“The support is really there,” McDonald said. “You can tell by all the honking as the cars pass.”

Quiroz-Rivera felt support from the community too, which gave her hope and the drive to continue forward.

“It gives me hope for our democracy and our republic,” Quiroz-Rivera said. “It energizes me for the next one.”

When asked about Trump’s recent presidential executive order to stop separating families at the United States-Mexico border after the outcry heard across the nation, Quiroz-Rivera was less hopeful.

“I don’t believe him,” Quiroz-Rivera said. “That’s a horrible thing for me to feel as an American. I can’t trust my president.”