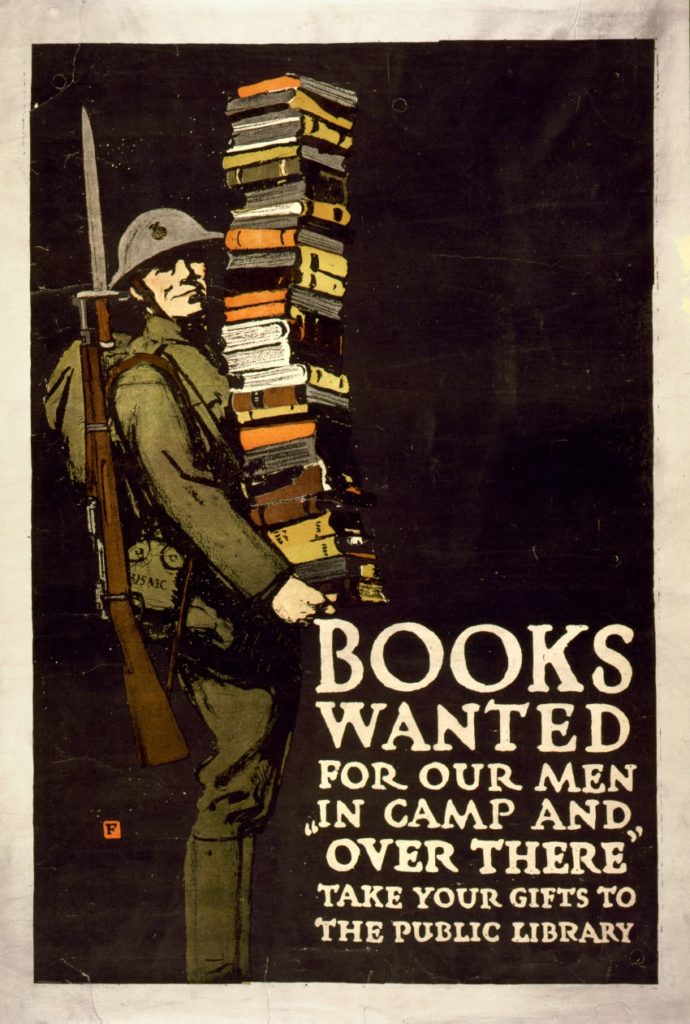 As the daughter and daughter-in-law of Air Force colonels, Veterans Day leads me to reflect on the sacrifices of persons in the military serving to our country. As the daughter of an English mother who survived the blitz and evacuation from London as a child during World War II, I’m also interested in how the folks at home support the troops. This past February, I learned about the critical role of books for American soldiers in World War II. A few months later, I was doing some research for a Cabrillo College local history class and was stunned to read how “ordinary” San Benito County folks participated successfully in a national book drive.

President Franklin Roosevelt said “Books are Weapons in the War of Ideas” and endorsed a national project to collect ten million books for the troops. The Victory Book Campaign started January 12, 1942, sponsored by the American Library Association, American Red Cross, and the United Service Organizations, Inc. (USO). The book drive, which started on Jan. 12, 1942, collected books for use in the government’s libraries located in forts, camps, posts, stations, and on ships for soldiers, sailors, and marines.

Jan. 2, 1942, headline “Victory Book Campaign Starts in SBC Today: ‘Give a book for a Service Man”

Jan. 29, 1942, headline: “San Benito County ‘Victory Book Drive’ Brings in 600 volumes for men in armed forces to date; Drive will end February 12.”  The article states: “Mrs. Florence Townsend, county librarian and local director of the Nation-wide Victory Book campaign announced yesterday that in a little over a week’s time 600 books had been donated by county residents to the drive. One hundred books were received on Monday. The Bitterwater district has contributed 68 books. Largest single contributor to date is the Ohrwall family of Cienaga who donated 85 volumes. The drive is slated to run through February 12, and next week the arduous task of sorting and repair will begin, Mrs. Townsend said. Should be in Good Shape: It is asked that books donated be in fairly good condition and as recent as possible. At this time contributions of magazines and periodicals are not being solicited. Any persons having books to give, and who have not been contacted by representatives of the collection committee may call the county library phone 44-W or Mrs. Bertha Briggs, chairman of the collection committee phone 336 and the books will be called for.”

Feb. 5, 1942, headline: Nearly 1,000 books gathered in San Benito County Victory Book Drive.” The article reported: “At the conclusion of its second week the Victory Book Campaign has reached a total of 995 books donated by the people of San Benito County [note: 1940 County population was 11,392] for the use of the men in the service…the tasks of sorting the books has already begun. The books both fiction and non-fiction are to be classified according to subject matter and general condition into several groups, before being shipped to their final destination.  Although the Victory Book Campaign is only entering its third week, military and naval authorities have asked for the immediate delivery of books. In a telegram to Mabel Gillis, state librarian at Sacramento and state director of the drive, New York officials of the campaign asked that 4500 books, mostly fiction, be rushed to the commanding officer of embarkation at a coast port. From the telegram it was indicated that the books were needed at once for men on duty in the Pacific and the Far East.”

Molly Guptill Manning’s book, When Books Went to War: the stories that helped us win World War II, describes the Victory Book Campaign in detail.  Her website has images of publicity posters and historic photos.

The VBC was a great success, but the sorting and shipping of heavy hardback book donations into combat conditions became problematic. Seeing the great benefit for morale, the military worked with publishers to make special edition paperbacks that could easily be carried in a pocket, read in a trench, and passed around.  They innovated with smaller pages of lightweight paper printed with tiny margins because of weight as well as the paper shortage.  Manning’s book documents the evolution of the program, the titles selected for the program and evidence of the impact of the books overseas.

Operation Paperback (OP) began in 1999, sending its first shipments to Kuwait and Saudi Arabia. In addition to overseas locations, Operation Paperback provides books to military and veterans hospitals located within the United States, as well as USO centers at US Airport transit points. In 2012, they also added a program to offer a free shipment of books to any military family. Run entirely by volunteers, it has shipped more than 2 million books to date.

Their website, www.operationpaperback.org, describes how anyone (individuals, families, groups) can become a volunteer shipper. As a volunteer shipper, you collect and ship your own books using the addresses that OP provides. Once registered with OP, you can login and request addresses of troops overseas, veterans, or military families using the automated system. Input the book genres collected (mysteries, westerns, etc.) and the OP system generates a customized list of names. Label your books and insert a standard shipping letter or personal note. Pack and address the box using the names OP provided. Then head to the Post Office to mail the box.

If you are on Facebook, check the OP Facebook page to see photos of volunteers collecting and packing books, and read thank you notes from veterans or people in the military telling the stories about what happens to the books they receive.

OP can also use cash donations to support ongoing special projects such as:

– Supporting chaplains as they counsel troops, both before redeployment and after reunification, with a variety of specifically-requested titles;

– Providing Iraqi Phrasebooks for units on the ground so that they may communicate effectively with local populations;

– Supplying children's books to deployed soldiers who read to their children via webcam or on DVDs.

Maybe this Veteran’s Day, a San Benito County service club or youth group could consider support of Operation Paperback, building on the heritage of our success in the national Victory Book Campaign of 1942.