This is the third in a series of six monthly articles about the geology of San Benito County by retired Earth Science teacher Jim Ostdick. This topic is the Calaveras Fault and other local faults. 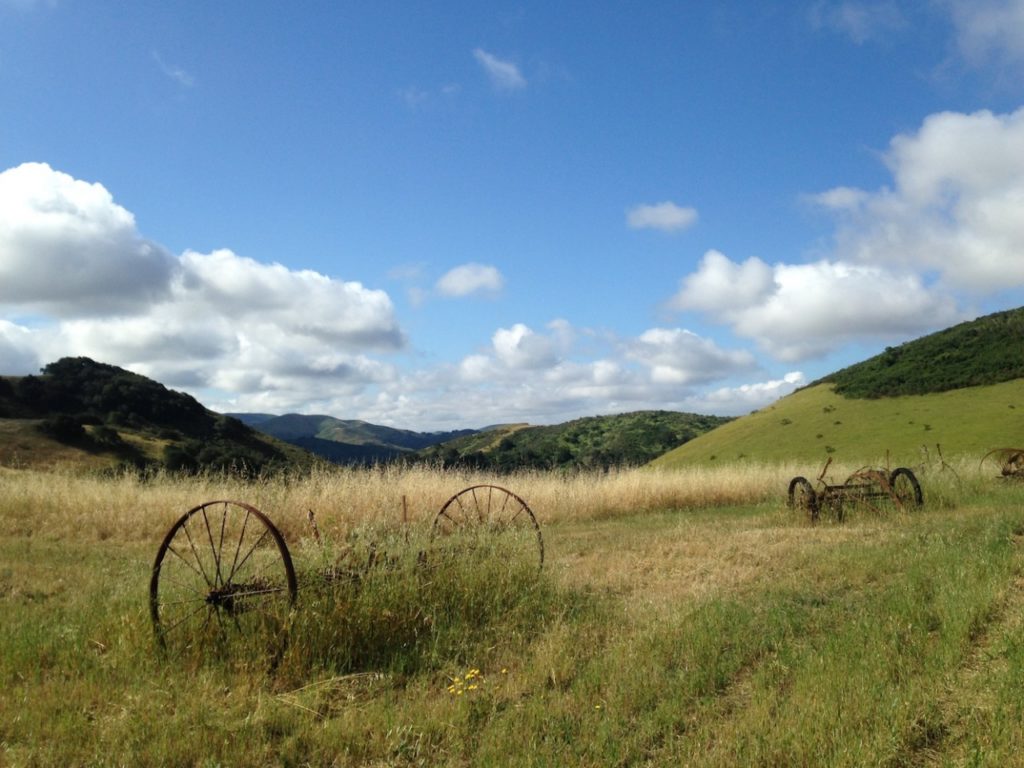 Rolling hills near the Vergeles Fault. Photo by Ilia Carson-Letelier. The previous article in this series described the San Andreas Fault, its location and why we call it the “creeping section.” In this article, we take a closer look at San Benito County to see some of the other, lesser faults in our area and the features associated with them.

The San Andreas Fault (SAF) is definitely the Big Mack Daddy of California geology. Along with the Sierra Frontal Fault on the east side of the Sierra Nevada and the Garlock Fault on the northern edge of the Mojave Desert, these major faults rule the roost. There are other faults in San Benito County besides the SAF, but their presence is a result of and controlled by movement along our famous transform plate boundary.

The attached map shows most of the faults in the county, such as the Vergeles, which splits off the SAF in the San Juan Canyon and heads towards Watsonville; the Sargent, which cuts through the Lomerias Muertas into the San Juan Valley; and the Quien Sabe, which lies at the base of the volcanic rocks in the Diablo Range. The most well-known of these minor faults, however, is the Calaveras Fault. It runs roughly parallel to the SAF from the northern Bay Area (there known as the Rodgers Creek Fault), through the East Bay (there called the Hayward Fault), through the city of Hollister, and finally peters out south of Paicines. The fault system has the same right lateral strike slip motion as the SAF. Because so many people live right in its path, it gets a lot of attention by seismologists. USGS studies predict that there is a 62 percent chance of a magnitude 6.7 earthquake along this system by the year 2032. The millions of people living and working in the East Bay will be strongly affected.

Like the SAF, the Calaveras Fault in San Benito County, presumably due to the local bedrock geology, creeps rather than sticks. If the predictions of a 6.7 M quake in the East Bay prove true, will Hollister experience the full effects? The answer remains to be seen, but the question definitely should remind all of us to safeguard our residences and have a well-thought out emergency plan in place.

The slow, creeping motion along the Calaveras has been documented by geologists far and wide. Field trips from around the state regularly visit Hollister to see the visible results of fault motion on human structures.

From Vista Park Hill to San Benito High School, examples of offset sidewalks, curbs and retaining walls can be seen on every east-west street. Vista Park Hill itself is caught between two strands of the Calaveras, most likely squeezed up above the surrounding valley like a wrinkle in a giant rug. The fault also runs through Dunne Park, pushing the east side up and the west side down. Where the tennis courts are today was once a sag pond, a depression filled with water, drained long ago to develop the park and adjacent residential area. Attached at the bottom of this article is a slide show I prepared for San Benito High School students in 2012. Since then, there have been many street and home repairs, but the slides give you a sense of Earth’s slow movement over time.

Note: please respect the privacy rights of homeowners along the way if you walk the route to observe the fault.

How slowly do the tectonic plates move in our area? One of the most interesting things about Pinnacles National Park is that it gives us an approximate answer to that question. The volcanic rocks that form the iconic spires in our park are on the western edge of the SAF. On the eastern edge, some 314 kilometers to the southeast, lie the Neenatch volcanics, a remarkably similar match in composition and age to the rocks at the Pinnacles. Knowing the age (~ 23 million years) and the distance (314 km), it is a pretty easy calculation to figure out the rate of movement along the fault. Your mission, should you choose to accept it, is to do the calculation, remembering that Distance = Rate x Time. Express your answer in the comments section in centimeters per year.

Yes, my friends, this is how geologists have fun.

Other articles by Jim Ostdick in the San Benito Geology Series: