This is the second in a series of six monthly articles about the geology of San Benito County by retired Earth Science teacher Jim Ostdick. This topic is the San Andreas Fault. 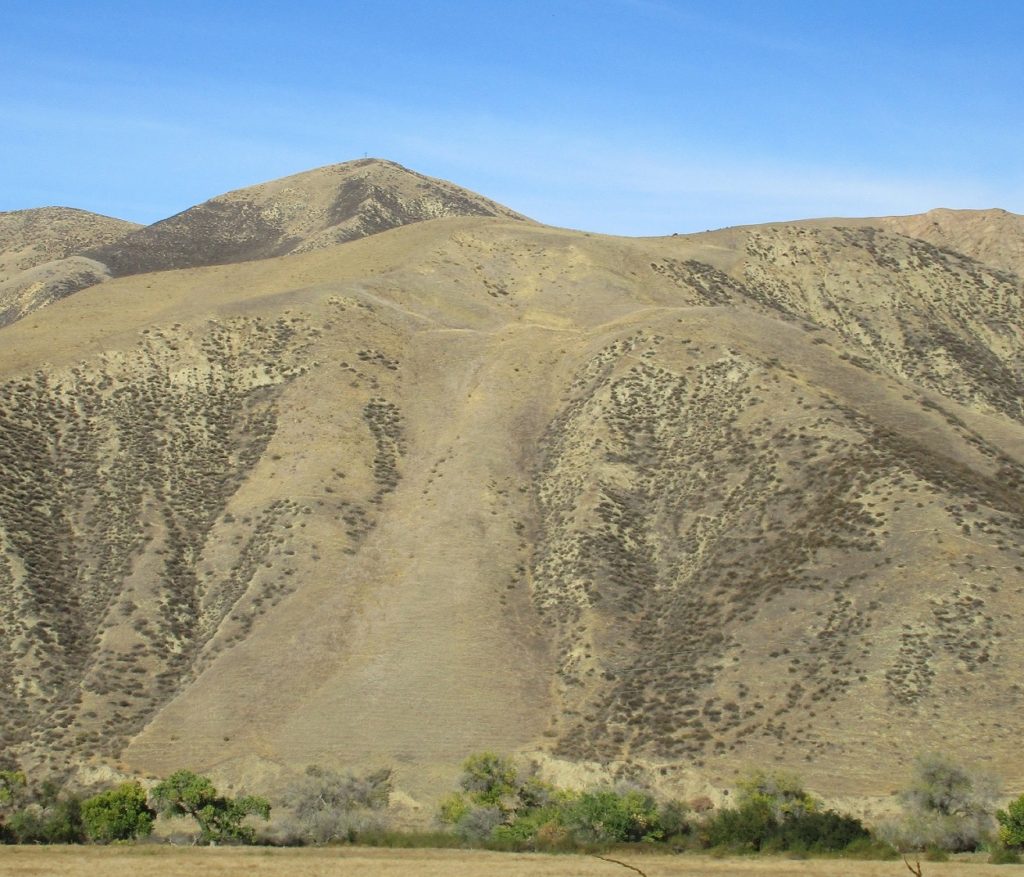 This article was contributed by Jim Ostdick.

Careful inspection of a “Pacific Ring of Fire” diagram reveals that the San Andreas Fault is a major player in the grinding, slow movements of Earth’s dynamic crust. Separating the North American Plate from the Pacific Plate, this transform tectonic boundary extends more than 800 miles from the northern tip of the Gulf of California to Point Arena north of Mendocino. It is the most studied fault system in the world.

A unique part of the San Andreas Fault slices through San Benito County all the way from Aromas in the northwest down through Bitterwater in the far southern end of the county. From just north of San Juan Bautista south to Parkfield in Monterey County, the fault is known to scientists as the “creeping section.”

This segment experiences many small earthquakes (usually < 4.0 and many < 2.0). Most seismologists theorize that the frequent release of strain energy by these small tremors diminishes the likelihood of a great earthquake (>7.0) in this region. Just as life is said to sometimes imitate art, south of Tres Pinos, life can seem to imitate science. The slow pace of country life along Highway 25 matches the mellow, slow, relatively constant “creep” of the plates along this beautiful central segment of the San Andreas.

Why is our section of the fault so different from the “locked,” potentially much more dangerous segments to the north and south of us? The answer may be contained in the rocks, minerals, and pore space fluids that underlie this area. As seen in this cross-sectional diagram, beneath the sediments that fill in the valleys between the Diablo Range and the Gabilan Range is bedrock from the floor of an ancient ocean.

The story of how this part of California all came together is the subject of a future article in this series. For now, it is important to understand that oceanic crust is made of basalt which formed from eruptions at underwater volcanic ridges. Over time, basalt, under tremendous heat and pressure, can metamorphose into serpentinite, which you will recognize as California’s state rock and the bane of Caltrans workers. It outcrops at the surface statewide and it easily crumbles into slides and rubble alongside steep slopes (drive out to Panoche and see).

Associated with serpentinite are soft, hydrothermally altered minerals like talc and smectites. Researchers from Stanford, after drilling deep into the fault near Parkfield, found significant amounts of these minerals in core samples. In separate accounts, these teams of scientists proposed that the presence of soft minerals and fluids in pore spaces of the bedrock could allow the fault to slip more easily and more often here than in other segments. The frequent release of strain energy may account for the fault creep in our region.

How is this gradual movement or fault creep manifested where we can see it? Geological processes are so slow compared to the frantic commutes lots of county residents endure every day. Many folks find it easier to sleep through those little rolling tremors we get every so often. Nobody gets hurt. Nothing breaks. We can live in the same house for years and pay off a mortgage without giving the whole seismological wonderland a thought. The geophysics nerds and their supercomputers in Menlo Park and Berkeley are on top of it, right?

Once in a while, though, we might wonder. What caused those bumps in the road, or that wiggle in the fence line, or that hairline crack in the ceiling, or that little bitty landslide slump, or that pond with no stream source. Where did all those hills and ridges come from?

Change over time is Mother Nature’s credo. Living on the edge? Most of us think the risk is worth it.

People ask if we mind living near the fault, but I always say ‘No.’ I’d choose an earthquake over a hurricane, tsunami or tornado any day! I think the beauty, location, weather and community of San Benito County far outweigh the risks of an earthquake. Natural disasters can happen anywhere, look at what the wildfires did to Napa last year. The most important thing is to be aware, be prepared, and know what to do when you start feeling the shake. The rest is pretty much out of our control. – Julie Finigan-Morris, San Juan Bautista