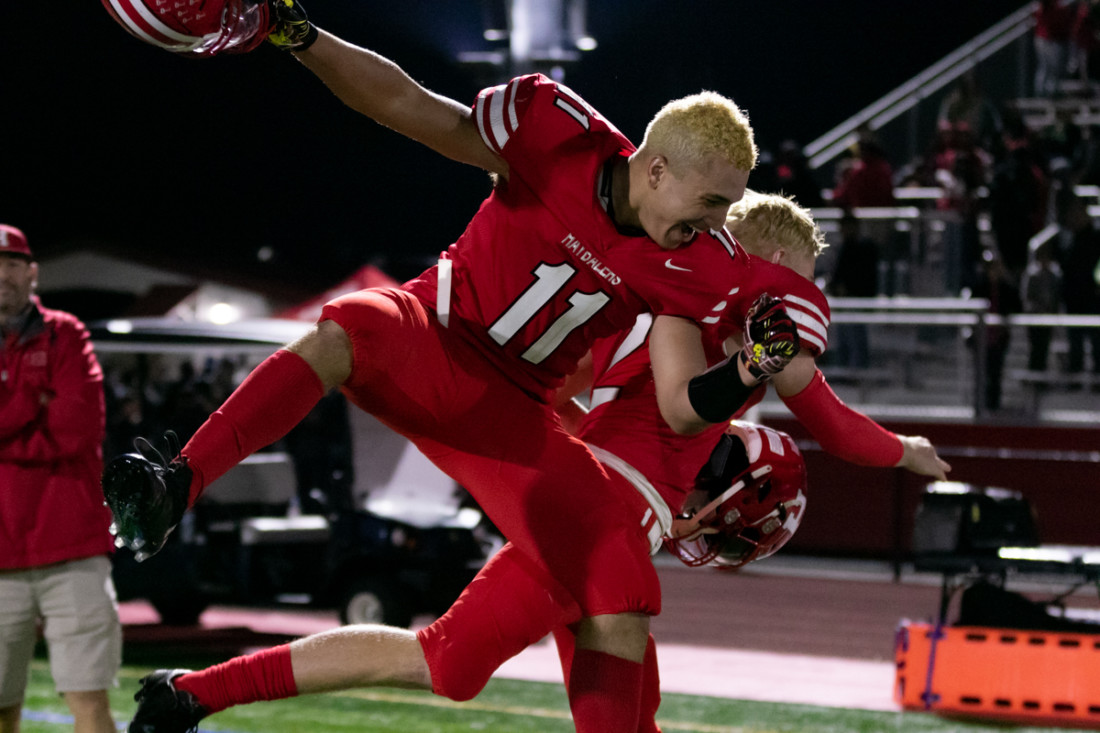 Jayden Freidt celebrating with a teammate. Photo by Chris Mora. 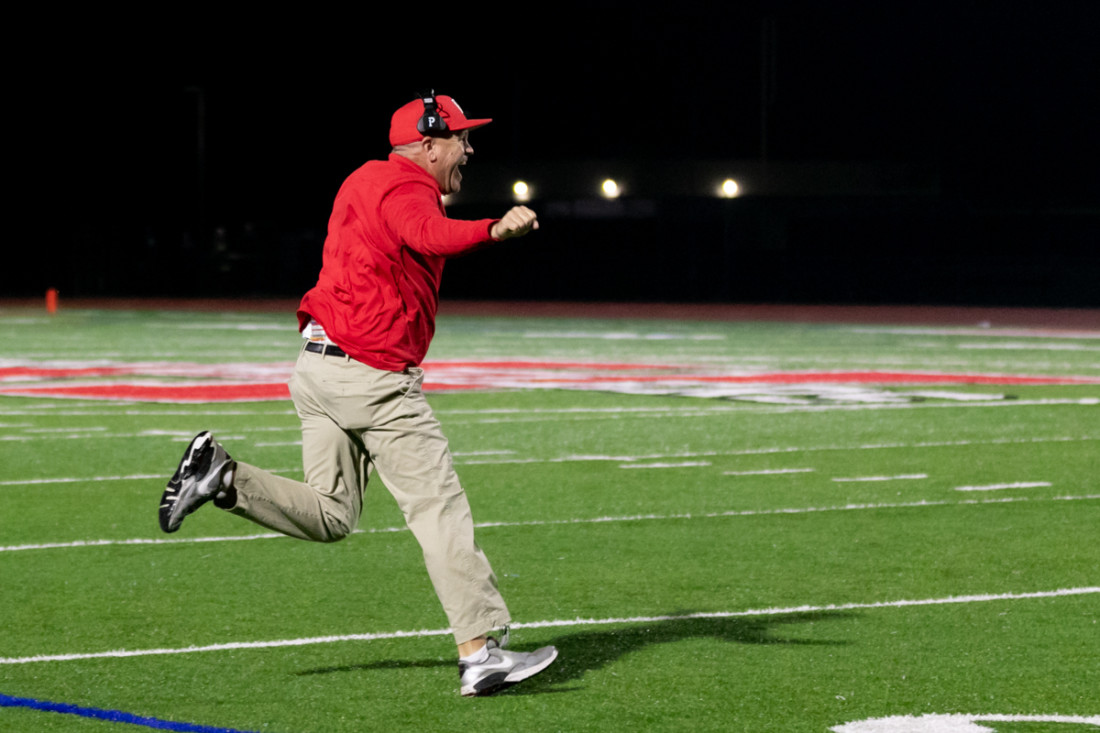 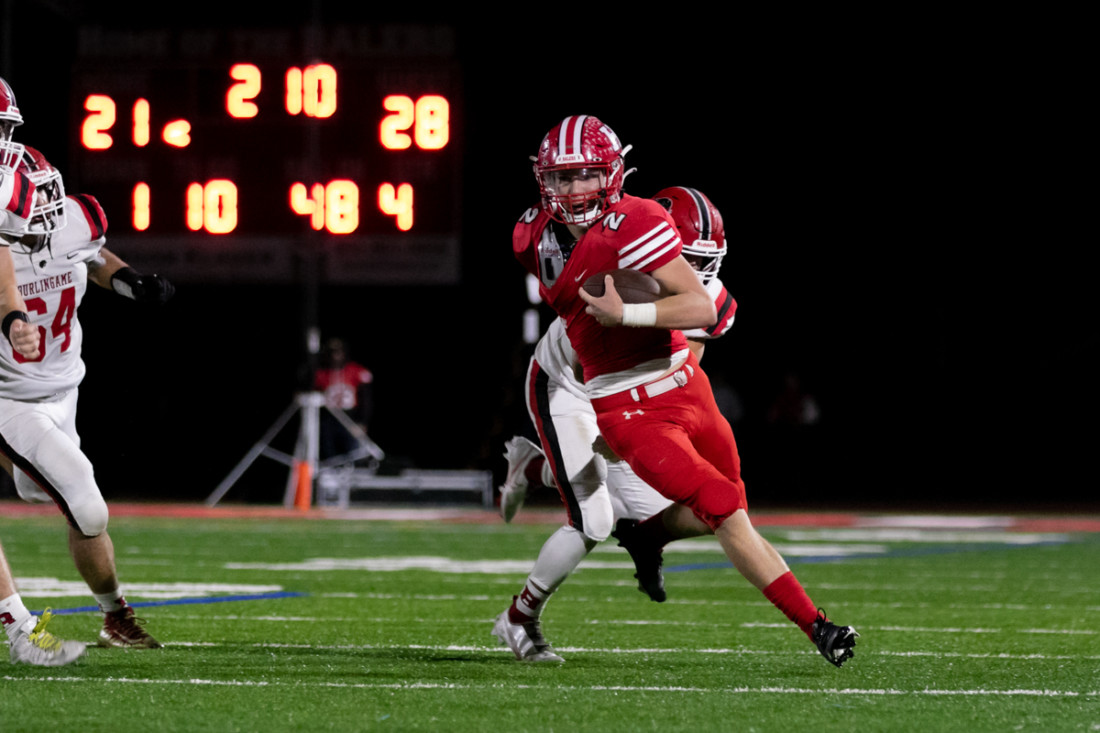 Quarterback Tyler Pacheco breaks tackles on his way to tie the game with about two minutes left in the game. Photo by Chris Mora. 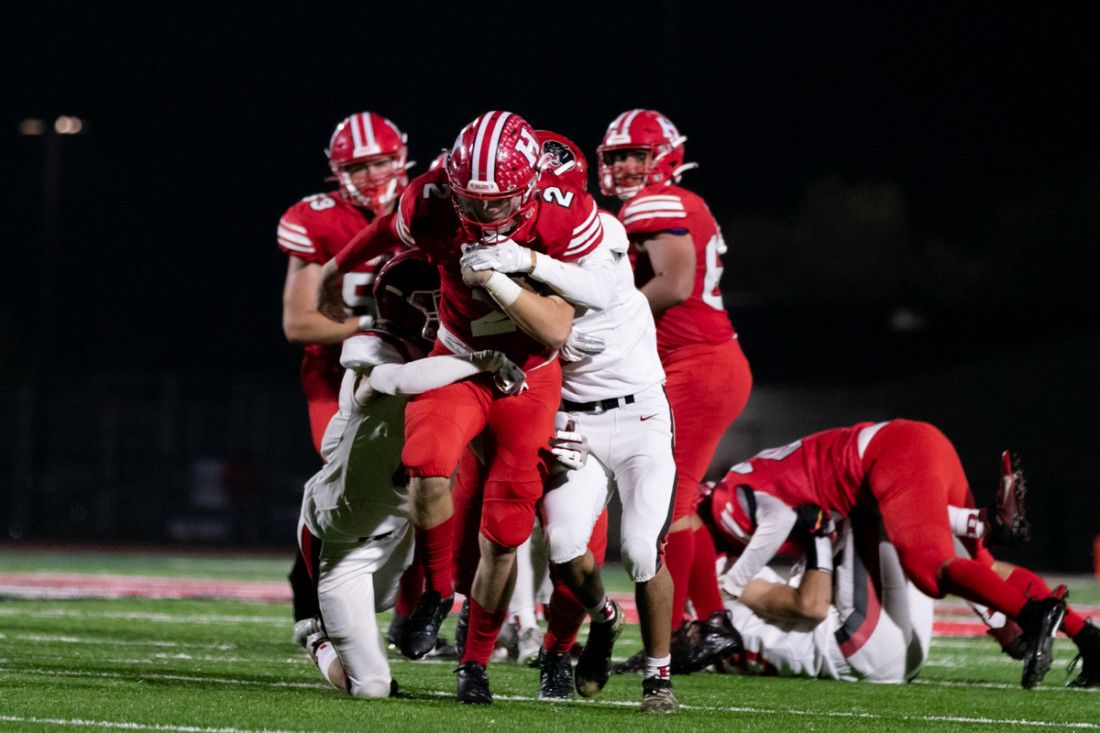 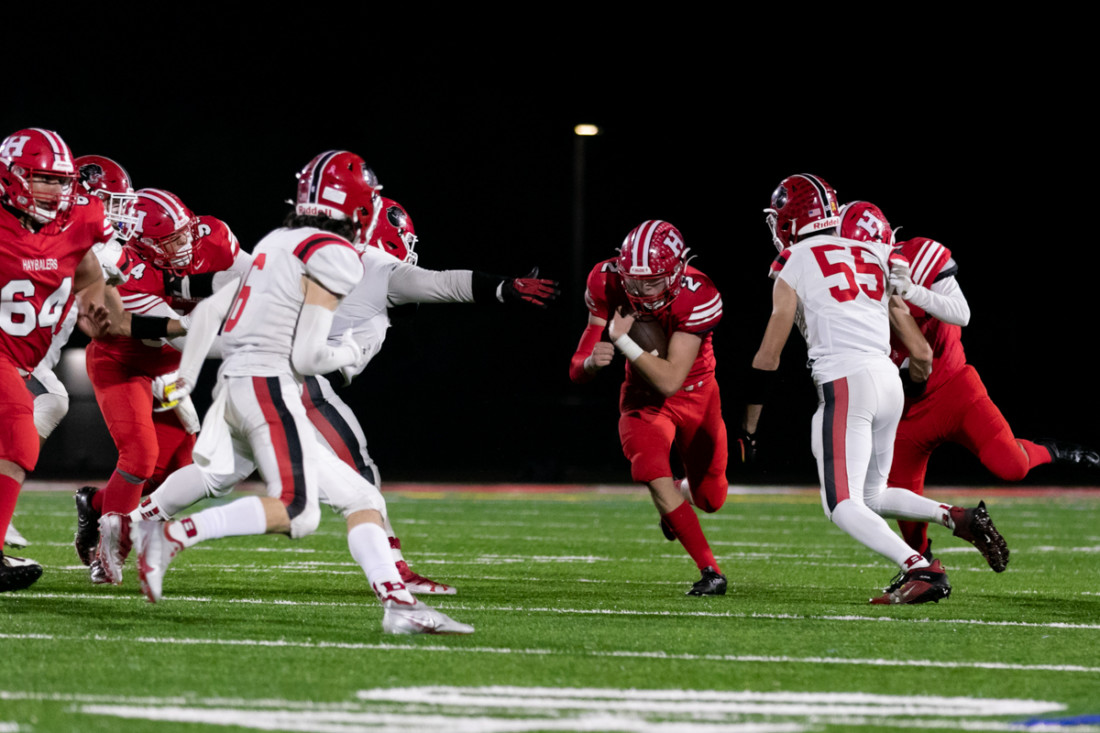 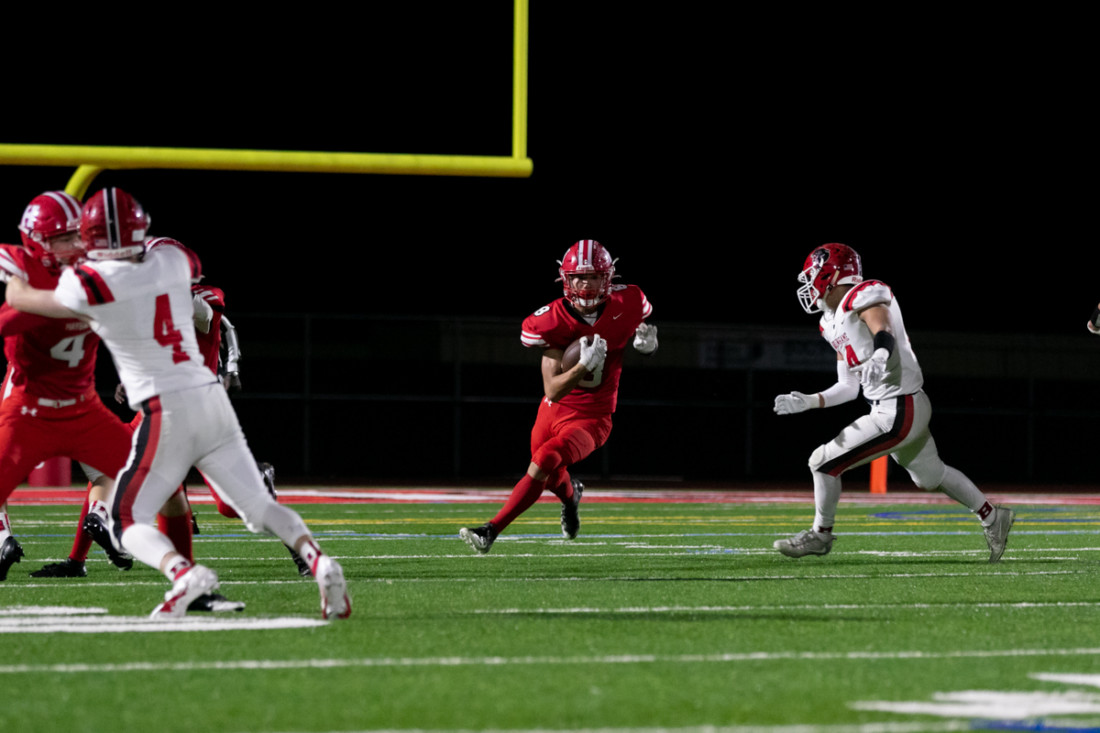 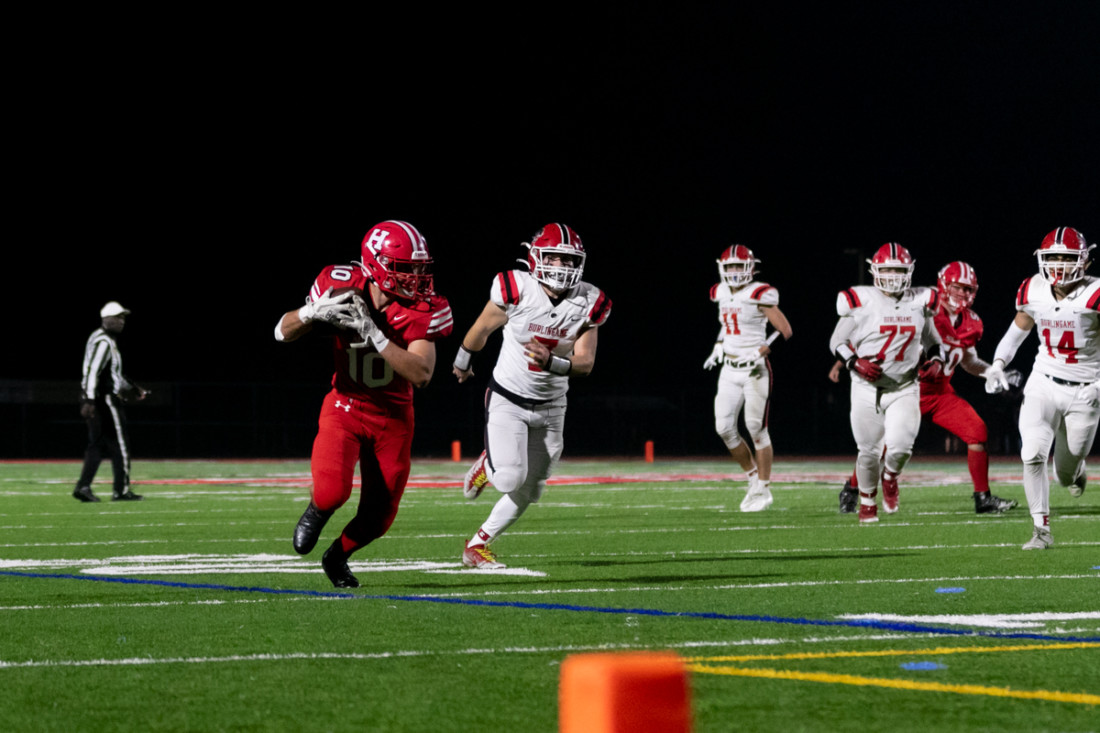 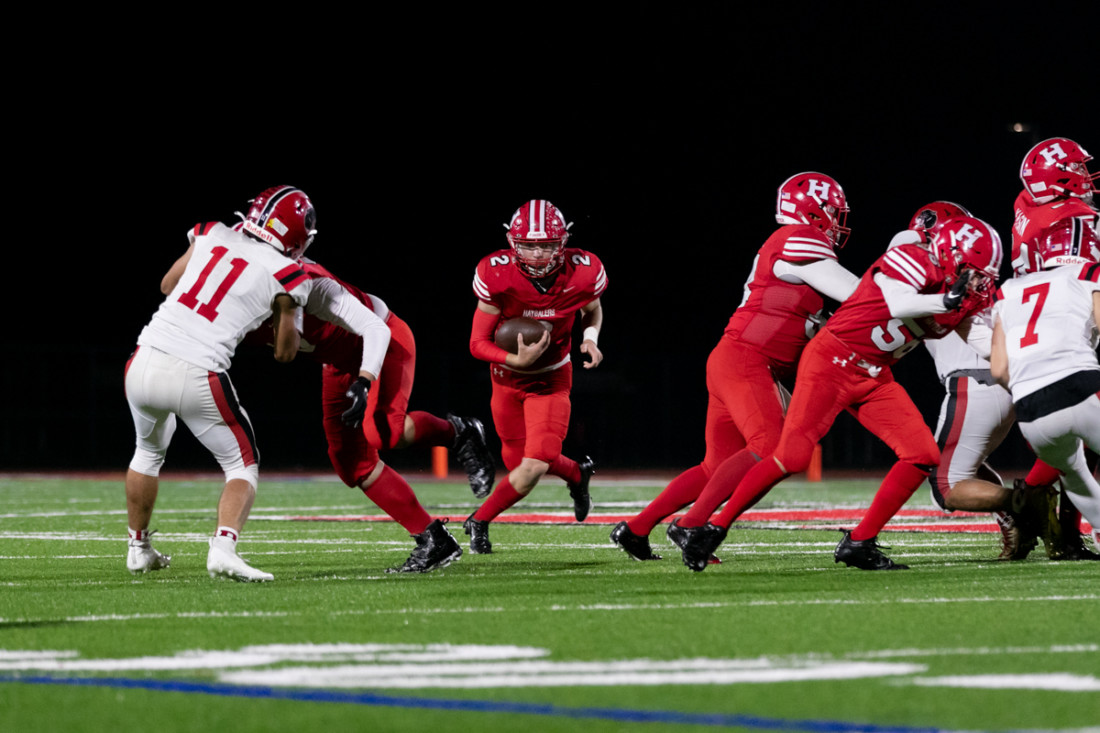 Behind by 14 points at the half, Balers pull-off comeback win in overtime. 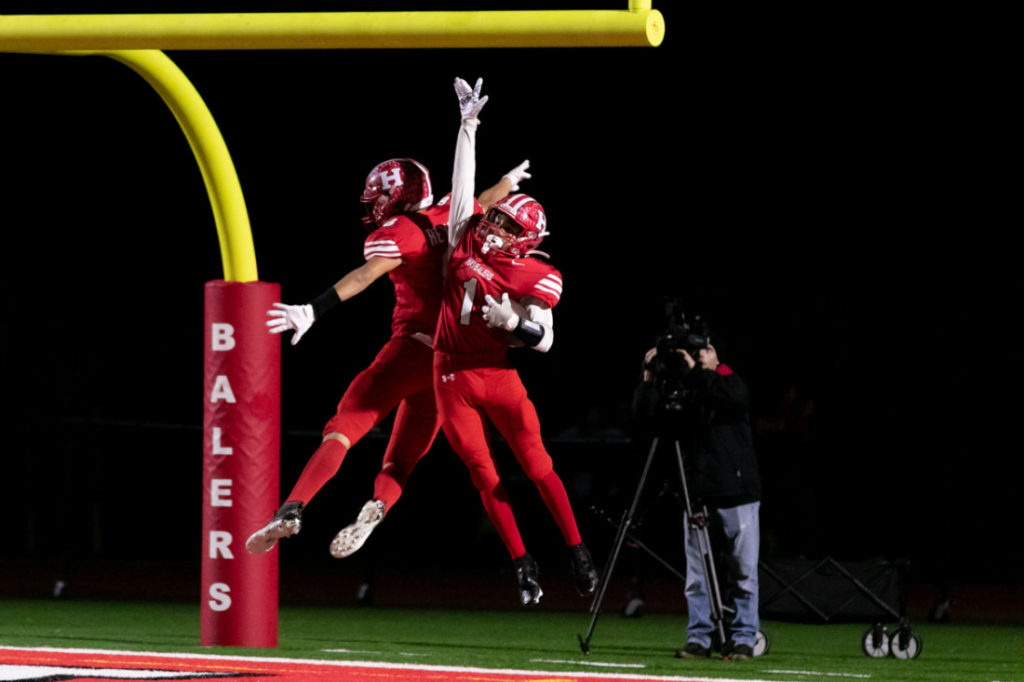 Isaiha Molina celebrating his score with a teammate. Photo by Chris Mora.
×

In a comeback fashion and in overtime, San Benito High School outlasted Burlingame in the first game of the Central Coast Section Division II quarterfinals game Friday, Nov 12. It was the Balers’ first possession in overtime when Manuel Velazco kicked a 20-yard field goal for the 31-28 win.

It was a tale of two halves for the Baler offense that was held scoreless; limited to 25 rushing yards and 41 passing yards in the first half.

“In the first half we came out flat,” quarterback Tyler Pacheco said. “They were dictating the pace of the game.”

Behind Pacheco, the Balers changed that in the second half. Pacheco rushed for three touchdowns and threw for another one to Isaiha Molina on a 67-yard play with about three minutes left in the third quarter, tying the game up at 21.

“I just knew that we needed a big play somewhere and I knew someone was going to step up and the ball happened to fall in my hands,” Molina said.

Pacheco ended the night with 88 rushing yards and 222 passing yards. Molina, who was limited to two catches for 12 yards in the first half, helped the offense with eight catches for 144 yards.

Pacheco was also supported by running back Ashton Buzzeta who finished with 43 rushing yards and 23 passing yards.

Molina was also a defensive factor, responding when the Balers needed it most.

With about a minute left in the first half and leading 14-0, the Panthers were threatening to increase the lead, having the ball on the Balers’ 30-yard line. After two consecutive penalties, the Panthers were trying to get into field goal range but Molina ruined those plans intercepting the ball near the Balers’ 30-yard line with three seconds left on the clock.

“Isaiha is a freakin stud,” Baler head coach Bryan Smith said. “He plays both ways for us. He is an offensive guy, a defense and special teams guy and he’s all about 145 pounds. Freakin’ animal.”

The defense came up big again after Pacheco was intercepted on a tipped ball near Burlingame’s 5-yard line, when the Balers were down 28-21. Following the interception, the Panthers’ dug themselves into a hole with three consecutive penalties, including one that erased a 79-yard run from quarterback Ryan Kall. The defense forced a punt with 2:24 left in the game.

Because the Balers tied the game in a 35-second drive, the defense needed to step-up again to force the game into overtime.

The defense sacked Kall for a nine-yard loss in the second play of the drive. Facing a fourth down and 10 yards to go, Burlingame opted to run out the three seconds left on the clock on the punt play.

“[It was an] outstanding game,” Baler head coach Bryan Smith said. “A ton of credit to Burlingame. Both programs played extremely hard. They left everything they had out on the field. We happened to have a little more at the end.”

The San Benito High School Balers will face Menlo High School in the semifinals match on Nov. 19 at 7 p.m. in Hollister. 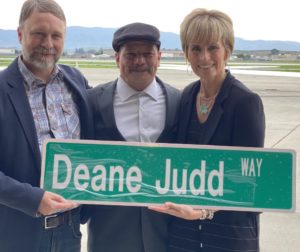 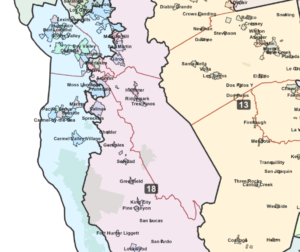 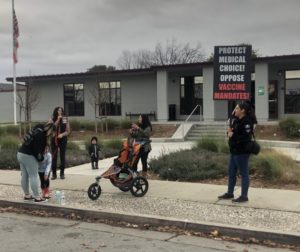