The Mayor's attempted removal of planning commissioner John Hopper causes confusion among audience members. The agenda item is set to be moved to a future meeting. 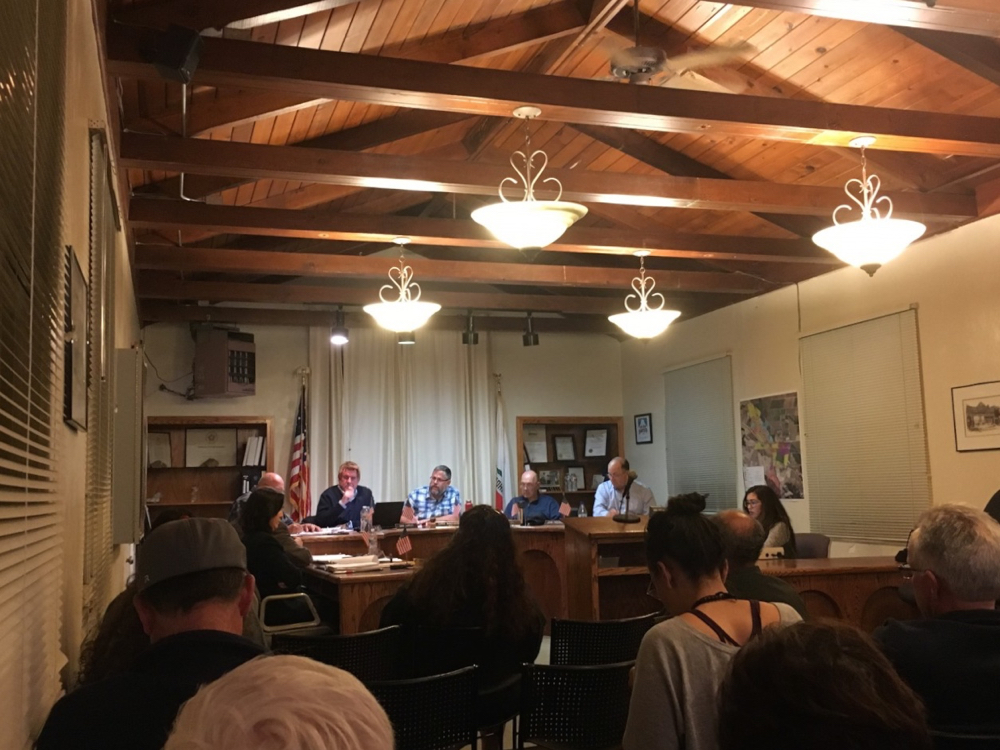 Nov. 8, city council continued its special meeting which had been adjourned abruptly Oct. 24 with a 3-2 vote.

The San Juan council regularly scheduled meeting had also been cancelled the week before due to not having posted the agenda on the city's website. The Brown Act requires the agenda of regular meetings to be posted at least 72 hours before the meeting.

Nov. 8, the first order of business for city council members was to address the Oct. 24 early adjournment with Mayor Chris Martorana suggesting they adopt a code of conduct.

In the week following the adjournment, BenitoLink asked San Juan Bautista Martorna to state directly why the Oct 24 meeting was suddenly adjourned.  "We ended the meeting because it became apparent that the meeting was not going to move forward productively," Mayor Chris Martorana told BenitoLink vaguely. With further prodding, he added that councilman Dan DeVries was intoxicated and stated that no direct action would be taken against him.

The Oct. 24 meeting was disrupted during the action item to increase acting city manager, Ed Tewes' hours from 32 to 40 per week. After a back and forth discussion with councilman DeVries, his fellow council members and city staff went over the next steps that needed to be taken on the agenda item, the audience became frustrated and community member Rachel Ponce asked that the meeting be adjourned early.  She said the residents of San Juan Bautista deserved better than what they were getting and deemed it an embarrassment. The meeting ended abruptly.

Rumors about DeVries being intoxicated at the city council meeting arose on the Facebook group, "What's Going on San Juan Bautista," with some calling for a recess to be called to deal with DeVries instead of ending the meeting.

BenitoLink attempted to reach councilman DeVries several times but he was not immediately available for comment following the incident.  On the Facebook group page DeVries wrote, "Hey San Juan. I’m out. All the best to you guys." The comments left residents to wonder if he would continue to serve on the council.

DeVries did attend as a council member at the Nov. 8 meeting, where he read a letter of apology addressed to the mayor, the city of San Juan Bautista, and the members of the city council.

"Although I have spoken to several of you individually, I wanted to take this opportunity to once again extend my heartfelt apology for my conduct at the Oct. 24 city council meeting. It was not only beneath my own personal standards of conduct and violated what I consider to be the standards of conduct of the office and what the community deserves of us in general, as well as what I know we expect from one another. It won't happen again, " he said. "I can tell you that also since Oct. 24, I've heard about the possible adoption of a code of conduct for council members and I whole-heartedly agree with that."

DeVries continued, "I feel that Oct. 24 was unfortunate. It was a bad night for me. I think that's all I need to say and I want to move on and continue to do good work for the city of San Juan Bautista."

Later in the discussion, city attorney Deborah Mall said a code of conduct is typically a voluntary statement by the council on what they do at meetings and there's no way to enforce it, adding it would only apply to the current members of the city council and would have to be revisited by the following council.

Councilman Tony Boch said, "I wonder why it is so complicated. All you have to do is act like a decent human being and treat your fellow council members and public with respect. That's it. Period."

During public comment, community member Rachel Ponce agreed with Boch's statement adding, "Behave yourself and be respectful of the position that you hold."

San Benito County resident Elia Salinas said, "I don’t think we should be beating a dead horse. I think the issue has been taken care off. "

Salinas continued saying she recommended council members go on a "retreat" and talk amongst themselves instead of in an open forum.

Martorana responded saying it was a wonderful sentiment but that it was illegal.

"It is not legal for us to meet in a non-public forum with a very few exceptions and that unfortunately would not qualify as one of those exceptions," he said.

Leslie Austin of Aromas said "First, I just want to say to Dan, I thought your message to the community was very courageous and I applaud you."

San Juan Bautista resident Mandisa Snodey thanked DeVries for addressing the public. "Dan thank you, that took a lot of courage and a lot of integrity to address that difficult topic. I support you and I thank you for being able to show up for San Juan. I know that you do your best. I know that you have a good heart and I just want to acknowledge you like that."

San Juan resident Jackie Morris agreed with Snodey's comments adding, "We voted for you. The people that voted for you have confidence in you. We all have our off days and l think we need to be more forgiving and more understanding."

During public comment, some members of the audience said there should have been a reason stated for Hopper's proposed removal.

Snodey said, "I just want to understand what is the due process, what is the legal process for arbitrarily removing a planning commissioner with no reason and then find somebody to replace him. I want to know really, if you're not going to tell me why you're doing this, then what is your plan to remedy it and to make our planning commission whole so they can get to business."

Morris said, "I don't need to know the why because I read the code book and it says that you can dismiss without cause. I just want to say that I whole-heartedly disagree with this action you are about to take place. From my perception with coming to these meeting for about a year now, I see that the planning commission has a very important job and I feel that chairman, Mr. Hopper, does a wonderful job to keep the spirit of San Juan, San Juan."

She continued, "He's the only person in this room right now, with the exception of a couple of members on the board that was against Copperleaf, that was against Rancho Vista, and he was to keep our town San Juan. Limited growth, sensible growth. He listens, he speaks to the desires of the community and I feel that right now you've just done a 180. You sat up there and talked about transparency and now Mayor Martorana, you're saying 'get rid of him' because you can. As a public member this just fosters more mistrust."

San Juan Bautista resident George Diaz said, "obviously like everybody before me, we don't know why you want to get rid of John but if it's because of this 'no-growth' stance, keep him, we need him.  He's the only one who's trying to keep everything under control. The growth in this town is outrageous. You guys should have put a stop or moratorium on it until it gets under control."

Hopper addressed the public saying he has been dedicated to San Juan Bautista since the day he moved there adding that he has always acted with his heart.

"I've always done what's right. What I think was right for you in this town. I was at a meeting with one of our city council members and he said to me that because I am anti-growth and because of the positions and stances that I take, this was an issue," he said. "They were trying to get other people on the planning commission that were more favorable towards growth. One of them was appointed tonight."

David Medeiros was appointed to the planning commission earlier in the meeting following the council's acceptance of Andy Moore's resignation.

Hopper continued saying, "I was also told, and I would like to apologize to you publicly if you think this is correct, that my leadership style was inappropriate. That I acted like it was my commission. That when I came to public meetings I spoke strongly in that manner. From the bottom of my heart if anybody feels that way, I apologize.

"I will say to you that when this came to me unfortunately it was discussed in violation of the Brown Act. Numerous council members talked to me that had talked to each other. I was also surprised to see this item on the agenda because I thought this item for tonight's meeting was to discuss business that wasn't concluded in the last meeting. So whatever action they take I want you to know that I will continue to work hard for this community," Hopper said. "For me to be characterized as anti-growth that is not true. I am very in favor of well- planned growth and growth that makes sense…"

Councilman John Freeman also asked what the reasons were for removing Hopper, directing his question to Mayor Martorana.

Attorney Mall interjected saying the removal was stated without cause and if they wanted to get into the cause they would have to set an evidentiary hearing at a future meeting.

Freeman continued saying that if there was going to be no cause given he would try to stop Hopper's removal.

"On Nov. 27 at 3 p.m. I went over to a certain councilman's house, councilman (Jim) West, and we talked for a while and he stated that he talked to another city council member. He didn’t say who, it doesn't matter, Brown Act violation right there."

Councilman West responded to Freeman's statement saying it wasn’t true. He added later during the discussion that he didn’t remember having a conversation with Freeman about Hopper.

Councilman Freeman went on to say that Mayor Martorana was also in violation of the Brown Act stating they had a conversation on the topic on Monday at 1 p.m.

"So, I will sue under the Brown Act," Freeman said.

After the Recess Freeman continued questioning the Mayor's proposal to remove Hopper.

"It's really bad management. What is going on in your mind? You're doing 180's here. It concerns me," he said.

Mayor Martorana made a comment as to why Hopper was being removed before being cut off by attorney Mall.

"I think we were talking cause for exceeding authority," he said.

With a 2-3 vote, Hopper will remain on the planning commission. While no official date has been given, the agenda item will be moved to a future meeting.