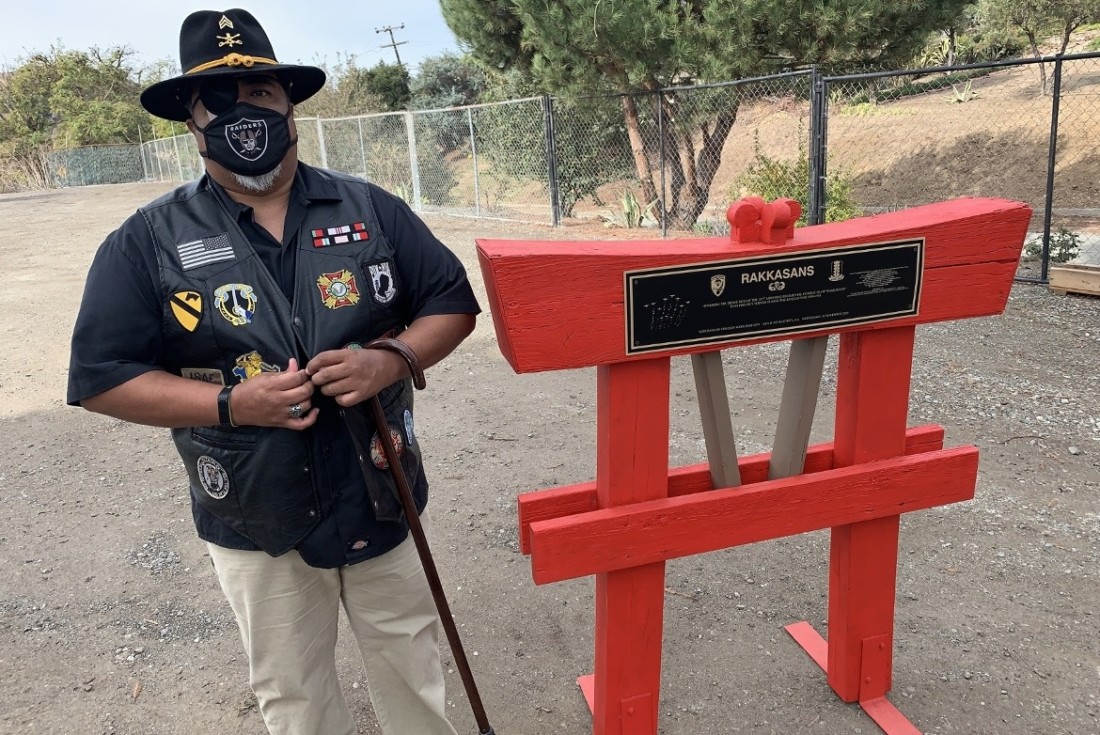 Erik Ortiz and the Rakkasan memorial. Photo by Robert Eliason. 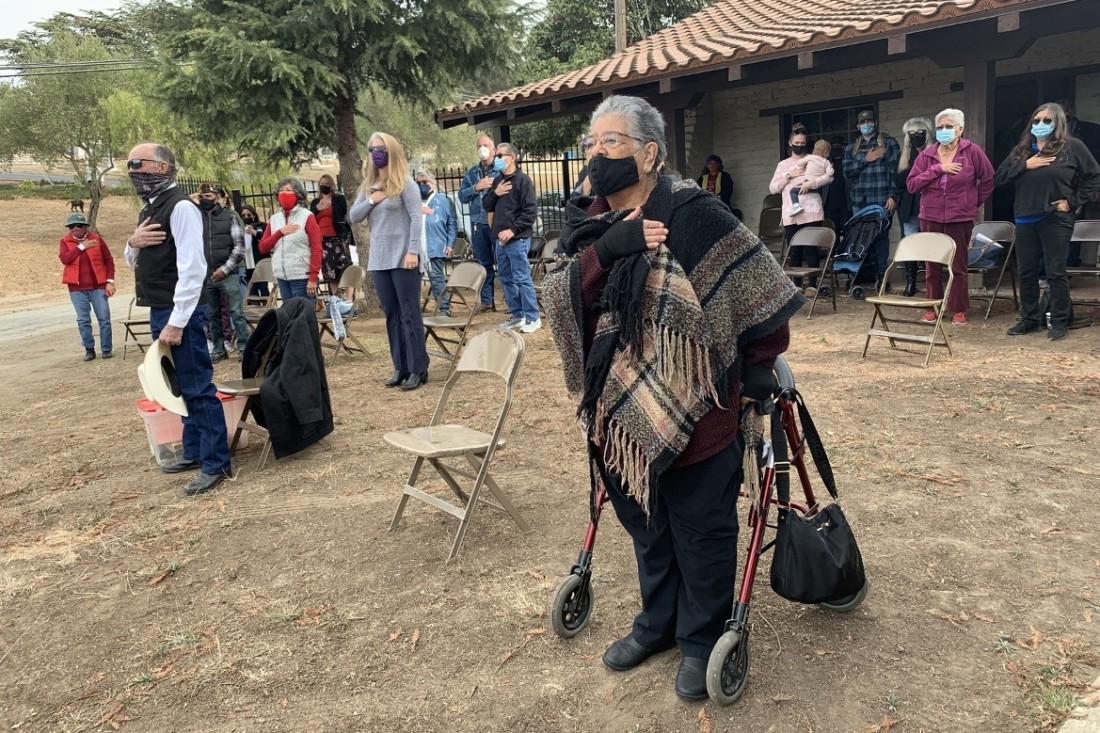 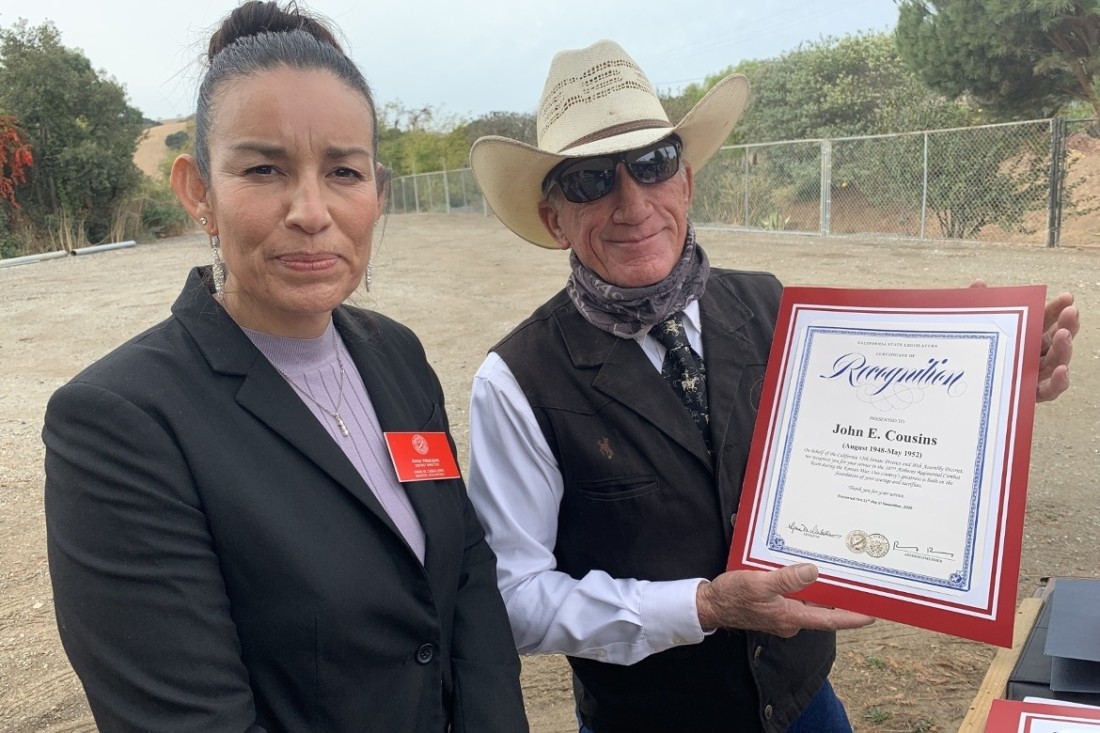 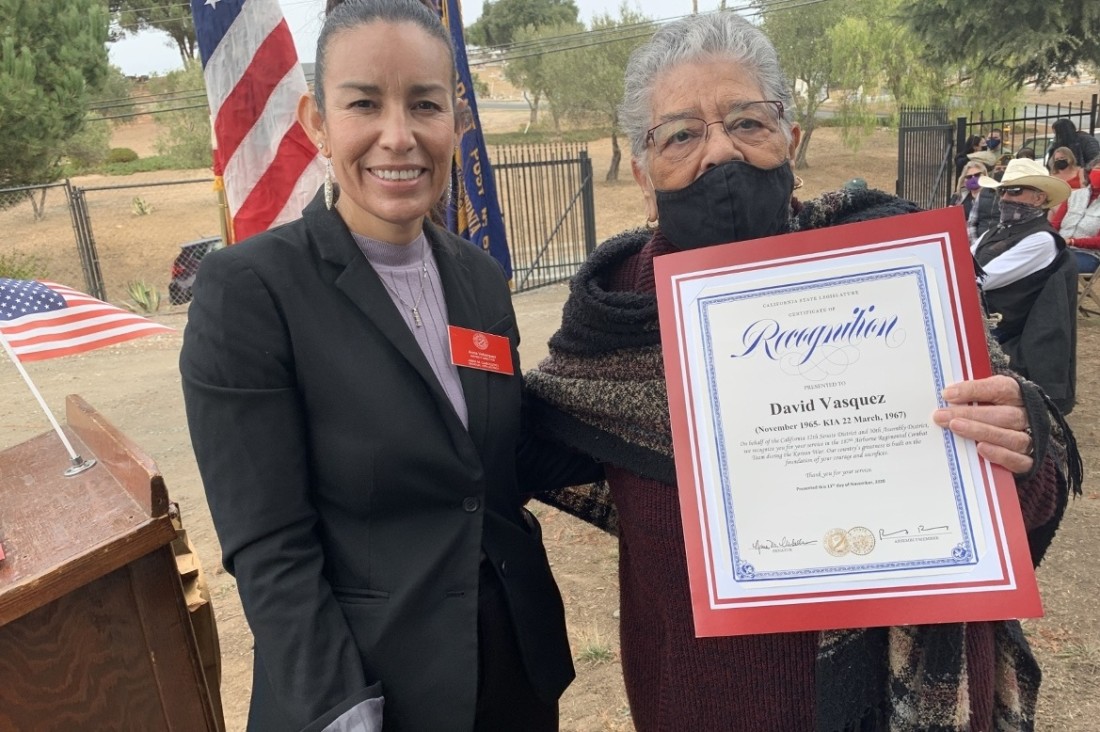 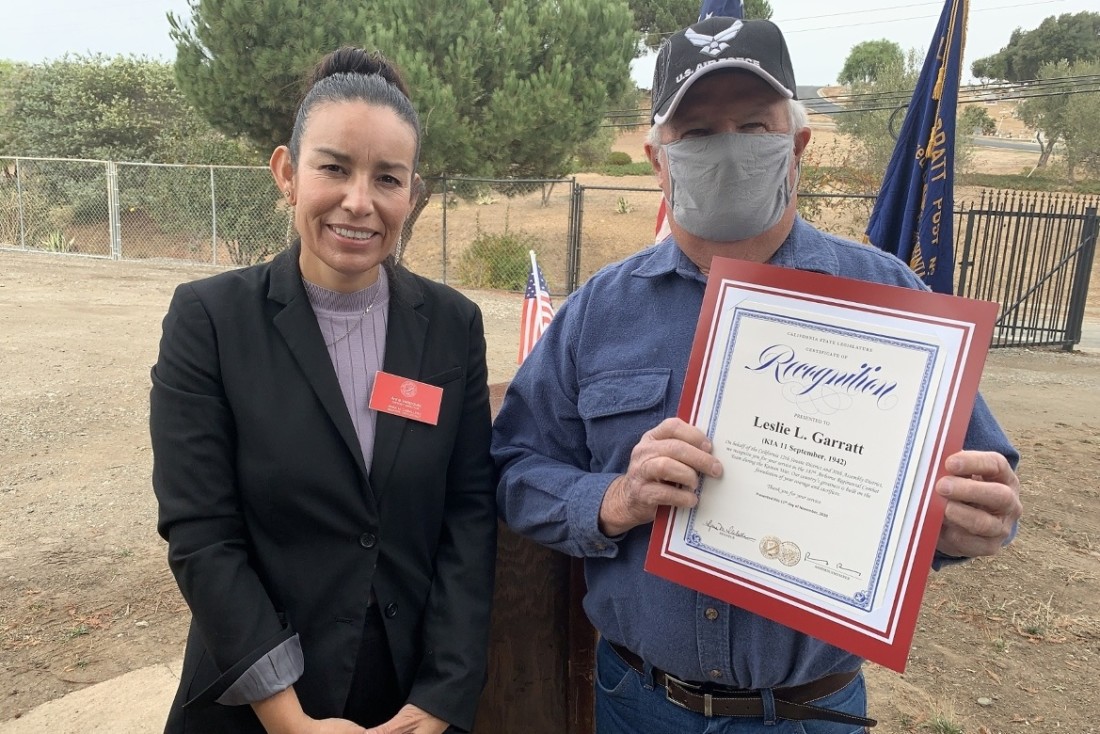 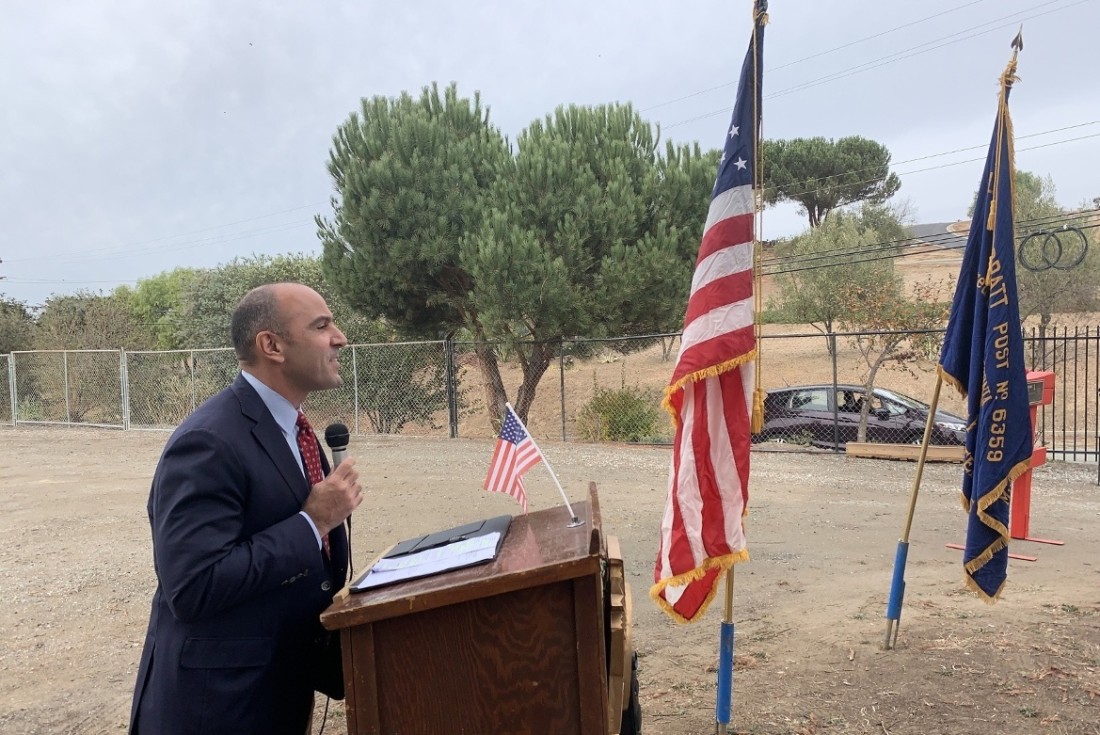 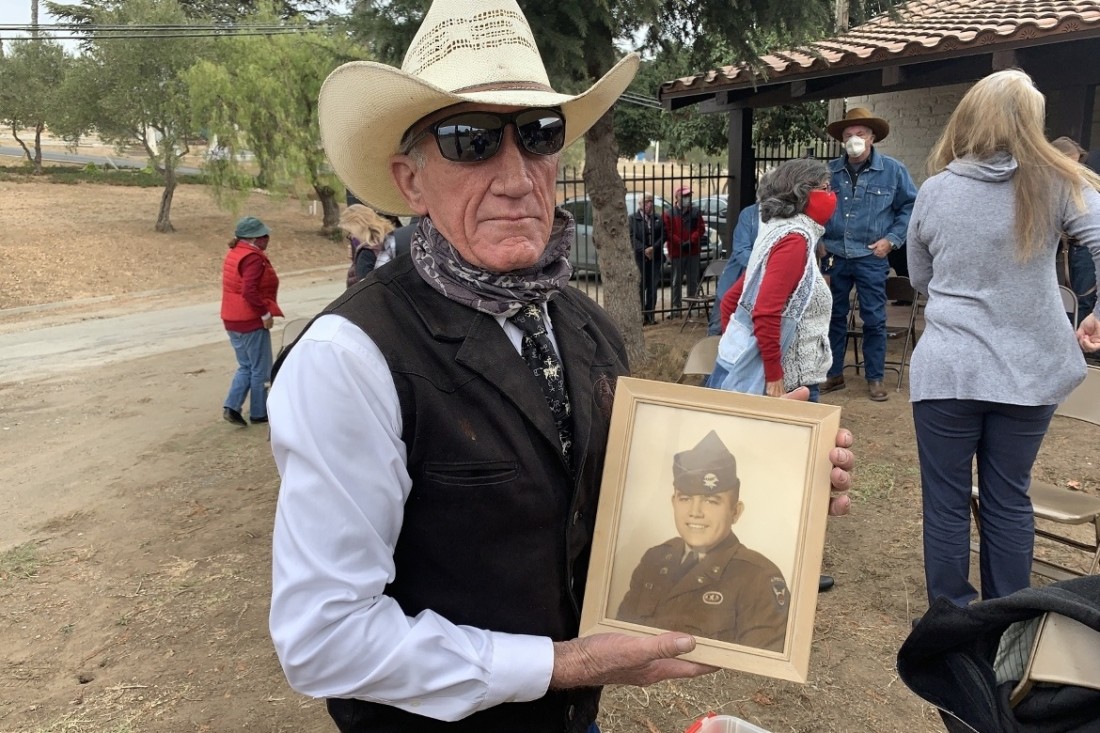 The last time Pauline Vasquez Valdivia saw her brother David was when he came home after basic training, just before being shipped out to Vietnam.

“He was drafted out of high school,” Valdivia said. “He would have gone on to college. He would have gotten married and had 10 kids. But it was not to be—he lost his chance to have a future.”

“Our family was devastated and it fell to me as the oldest to hold us all together,” Valdivia said. “We buried him here at the cemetery. The city got us four white horses and a chariot to take him through town and up the hill.”

Vasquez was just one of the servicemen honored at VFW Leslie L. Garratt Post 6359 in San Juan Bautista this Veterans Day. The ceremony also honored Garratt, for whom the post is named, Rodolfo Hernandez, Joe Baldonado, Lester Hammond, Richard Wilson and John Cousins. Anna Velasquez was present to hand out certificates from state Senator Anna Caballero’s office to the families of three servicemen.

Joe Cousins remembered his father John: “He never really talked about the war very much. It wasn’t until after he died that we met someone who served with him who told us about what he had done during the war.”

That service included a risky mission to capture an enemy general who was traveling by train during the Korean War. Cousins listed his father’s many honors as he spoke to the large crowd that had come to remember those who served.

“My dad was awarded seven Bronze Stars,” he said, “which were awarded for heroic service to men who served after Dec. 6, 1941. He was awarded an Arrowhead, which goes to servicemen who took part in airborne assaults. And the Korean government honored him with a Service Medal for his participation in the Korean War. We remember him as Jack Cousins, the man from San Juan Bautista who never quit and gave it his all.”

Honors also went to men who served in the 187th Infantry Regiment, which participated in parachute and glider operations in Japan and Korea. The regiment is known as the “Rakkasans,” which comes from the Japanese, meaning “falling umbrellas,” a phrase used by an army translator trying to explain the capabilities of the unit to Japanese civilians. Hammond, Baldonado, Wilson and Hernandez were members of this unit. Wilson earned a Medal of Honor and soldiers in the regiment earned 18 Distinguished Service Crosses.

Congressman Jimmy Panetta, himself a veteran of the Afghanistan war, quoted John F. Kennedy in his tribute to American servicemen.

“In the long history of the world, only a few generations are granted the opportunity to defend freedom at its maximum hour of danger.”

Panetta continued, “We know people in this area get Veterans Day and we get that sense of service because we fulfill our obligation to give back to the country and the community that has given all of us so much. When you look out at the headstones at Arlington National Cemetery, you realize those headstones are the foundations upon which this nation is founded.”

Asked to sum up San Juan’s servicemen and their contributions to the military, Erik Ortiz, junior post commander of Post 6359, kept it simple.

“These men and women sacrifice everything for us,” he said. “They are badasses. Every single one—they are badass warriors.”