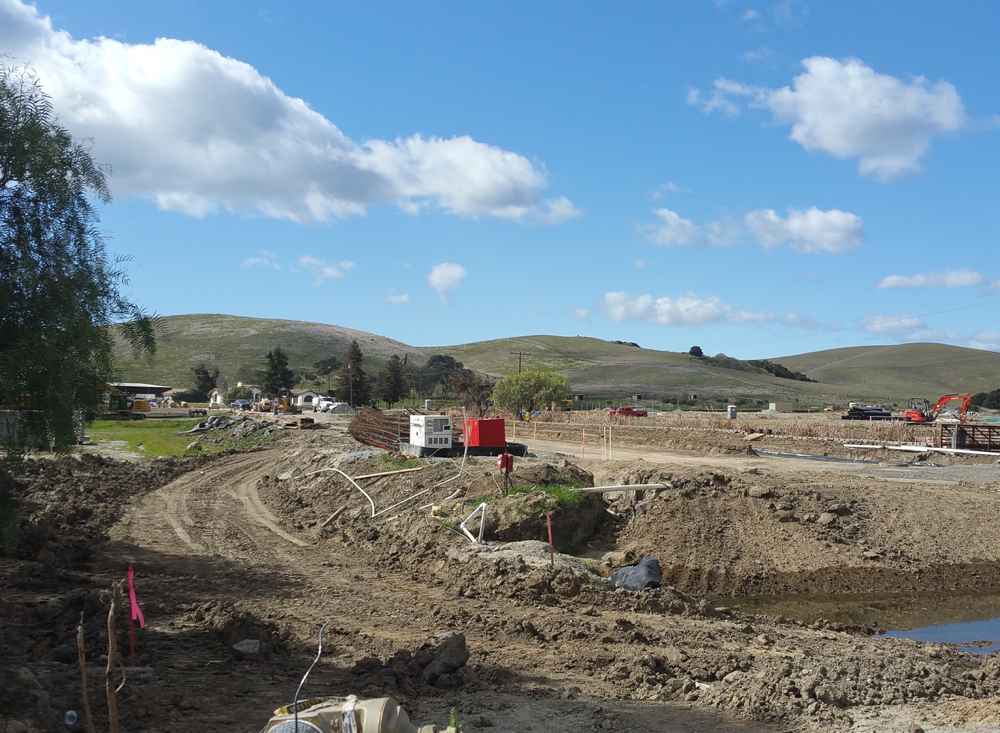 As tractors and heavy machinery continue their work at the 28-acre Rancho Vista housing project on the north side of San Juan Bautista, neighbors surrounding the development remain skeptical, voicing concerns
over what they view as changes to the initial development agreement approved by the city nearly three years ago.

In 2015, the present construction site was farmland and city officials, then led by Roger Grimsley, who served as both the city manager and city engineer, told reporters that the 85-unit, single-family development
would likely be built in 2016.

Two years after that date, the site is still vacant, and according to current city officials – Grimsley was pressured to resign over his handling of the Rancho Vista project last summer during a dramatic city council meeting- the development will not have homes built until the city's water situation is resolved, perhaps in October.

San Juan Bautista is currently under two compliance orders from the state water resources board because of high rates of nitrates in city water and an insufficient backup system if a well goes out. The city's nearly 2,000 residents get their water from two city wells.

"Homes can't go in there unless there are new water connections, which rely on the installation and operation of Well 6," said assistant city manager Michaele LaForge.

In December, city officials updated local residents (https://benitolinkcom.wpengine.com/news/san-juan-bautista-city-council-hears-plan-fix-contaminated-water)on the water situation, which specified that while the city is working on getting two wells (Well 5 & Well 6) online, Well 5, is associated with the Copperleaf subdivision by Edenbridge Homes, an approved but as yet unbuilt 45-unit housing development.

According to the city, Copperleaf contributed a site and the costs of drilling a test well, developing the production well and getting it up and running. They are receiving a credit against water connection fees, which are estimated at $380,000.

Well 6 is currently in negotiations with Dale Coke, a local farmer. LaForge said the city hopes to have Well 6 online by October.

According to the city, Rancho Vista has a “development agreement” that locks in water connection fees at $7,550 per unit. In total, the city states, Rancho Vista, which is being built by Meritage Homes, is paying nearly $1.1 million toward solving the community’s water problems.

Neighbors are also concerned over the number of homes that are going to be built in Phase 7. The Rancho Vista subdivision was divided into seven phases, and the last one is set to have five homes. Neighbor Jim Pisano said the initial plan was to have only four homes in Phase 7.

According to the city, because of flooding in Phase 5, the developer lost an approved housing unit in Lot 59 due to drainage issues. The unit was then added to Phase 7, bringing the total houses in that section to five. LaForge said the transfer substantially conformed to the development plan.

Pisano said neighbors were also concerned over the number of 2-story homes planned for Phase 7. LaForge said the developer had argued that 70 percent of the total development could consist of two-story single family homes,
however, LaForge said upon reviewing the conditions of approval, the 70 percent was in reference to each street segment.

Therefore, in Phase 7, there will be three 2-story and two 1-story homes.

"That has not been publicized yet," said LaForge.

While neighbors may have to live next to the building site for many more months until the city can get more water wells in operation, the city has started to present construction updates at the city council meetings
and LaForge has met with concerned neighbors about Phase 7 at a roundtable discussion in January.

"Michaele has been good about supervision," said Pisano, who acknowledged that he received a letter on his door notifying him that a truck would be passing by his home. "That was a first."