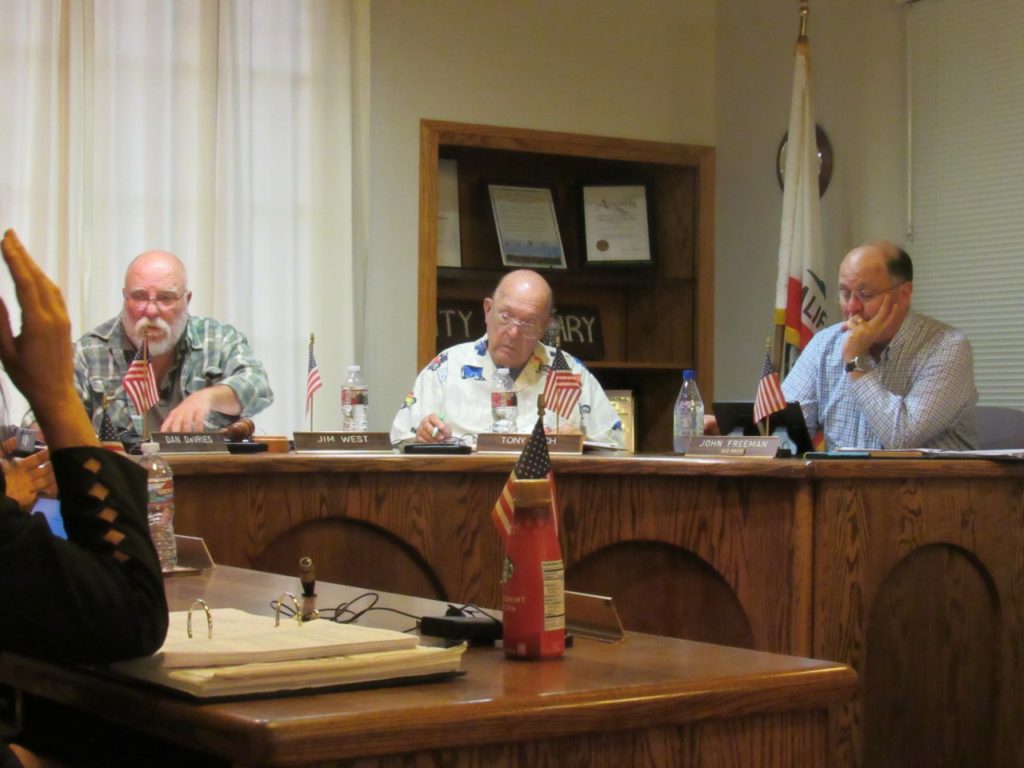 With a unanimous 3-0 vote at its Oct. 16 meeting, San Juan Bautista City Council awarded a two-year contract to Cypress Water Services to operate the city’s wastewater treatment plant at $261,780 for two years.

Bracewell Engineering operated the plant, located at 1120 Third Street, for over 30 years, but submitted a 90-day notice to the city Aug. 1 to terminate their contract.

The city engineer, consultant Patrick Dobbins from Harris & Associates, said the reasons Bracewell gave for terminating the contract were that the city has not kept up with the maintenance needs and their operator certifications were at risk.

In order to keep them, Dobbins continued, it would cost the city more than $13,800 per month. Bracewell has been charging $10,000 monthly, including lab fees.

“Bracewell has basically been losing money operating the plant, by choice,” Dobbins said. “What I was told last week by Chris [Hauge] is that this is the first plant that Loyd Bracewell designed, so it’s sort of near and dear to his heart.”

The new contract with Cypress Water Services includes a contingency budget of $20,000, which Dobbins said will be the cost of lab testing for a year.

The city also removed some aspects to the scope of work like landscaping, which will be San Juan Bautista Public Works’ responsibility, Dobbins said.

“We were getting an amazing deal with Bracewell,” City Manager Michaele LaForge said. “I think part of it is the nostalgia aspect and part of it was they were using our facility. They had a building there. They used that as their headquarters so they were getting some benefit out of that.”

Veolia, National O&M, and Jacobs also submitted a proposal before the Sept. 25 deadline.

The council approved an additional $100,000 to remove sludge from the wastewater treatment plant.

The additional sludge removal will be done at a lower unit price—$820—than the original contract, Dobbins said.

Dobbins said San Juan Bautista would be taking advantage of the one-time $78,000 mobilization fee, which is part of the original contract.

In the future, the city will face other challenges when it comes to removing sludge. The property Synagro is using to set up its equipment will soon be developed, and the city will be unable to get rid of dry sludge at landfills in a few years because of state legislation. Dobbins said that makes it more important to get as much as they can out now.

Dobbins said with the additional funds, the city would be lucky to remove half of the sludge present at the plant.

“Every ton we get out of there is better than the alternative,” Vice Mayor John Freeman said.

Freeman suggested using filter press in the future to service the plant five days a week and haul sludge on a monthly or seasonal basis.

Dobbins said residents should expect odor nuisance from the sludge and constant noise from the emergency generator trucks hauling the sludge while work is being done.

“That’s how this type of contractor operates,” Dobbins said. “Get in, get out.”