On Memorial Day, the San Juan Bautista VFW Post 6359 honored the late David Vasquez, the first and only San Juan native killed in action in Vietnam. 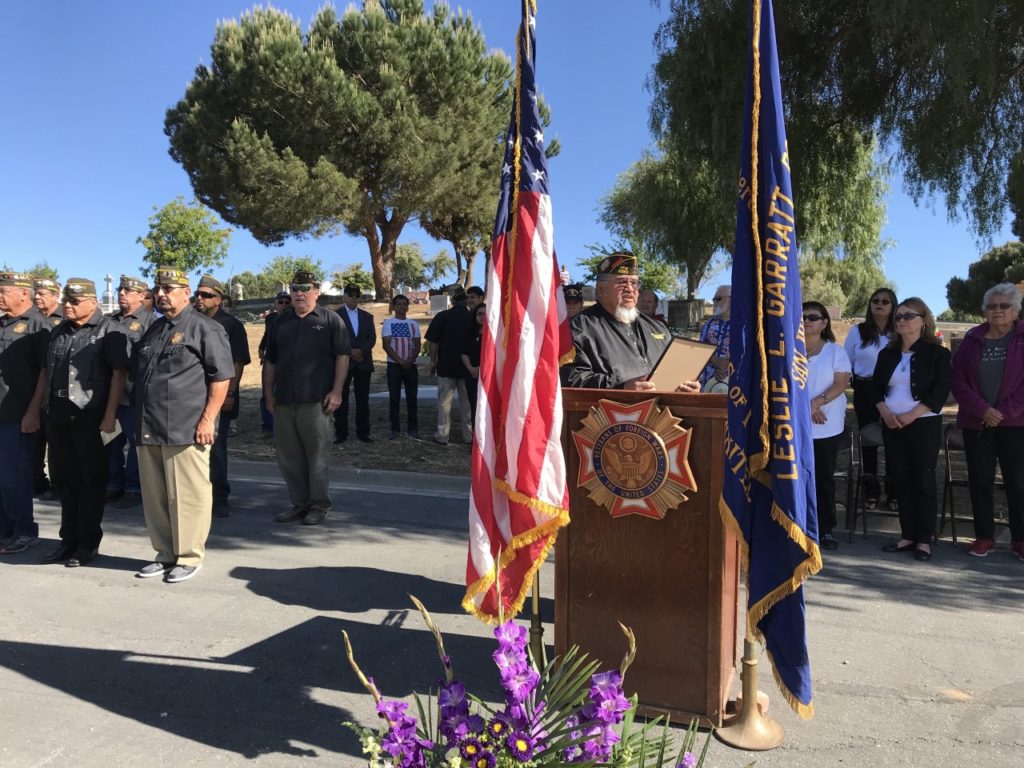 Near his late-friend’s San Juan Bautista grave site on Monday morning, Hollister resident and Vietnam War veteran Vince Luna recalled his youth in San Juan Bautista. Luna filled his summer months picking crops in the San Juan Valley to help his parents pay for school clothes, while his spare time was spent playing with friends at the local baseball park. Among those who stooped beside Luna in the fields and who teamed up with him on the baseball diamond was David Vasquez, the first and only San Juan Bautista native killed in action in Vietnam.

On this Memorial Day 2018, Luna joined his fellow Veterans of Foreign Wars (VFW) Leslie L. Garratt Post 6359 members in a brief, outdoor ceremony honoring Vasquez, one of nearly 60,000 American soldiers who lost their lives during the Vietnam War.

During the memorial service, San Juan resident and Vietnam veteran Manuel Chavez read from a picture frame that contained a photo of Vasquez in army fatigues, his years of life, and a brief write-up about his death.

The then-twenty-one year old army specialist was killed on March 22, 1967 in Pleiku, Vietnam. He was posthumously awarded a Bronze Star and a Purple Heart.

After the ceremony, VFW Post Commander and Hollister resident Augustine Garcia explained to BenitoLink that he decided to honor Vasquez following the discovery on the post’s interior walls of “an inappropriate symbol of appreciation [for Vasquez’s service and sacrifice].”

“We needed to right a wrong,” Garcia added.

The San Juan VFW made two, identical memorial frames of Vasquez, according to Garcia. One will be given to the late-soldier’s family, and the other now has a permanent home inside the post.

Before returning to attend a Hollister Memorial Day commemoration, Luna was asked by BenitoLink what should people in San Benito County remember about Vasquez. Standing next to his fallen friend’s headstone, Luna said, “David was a young gentleman who worked hard, and he was a family guy.”