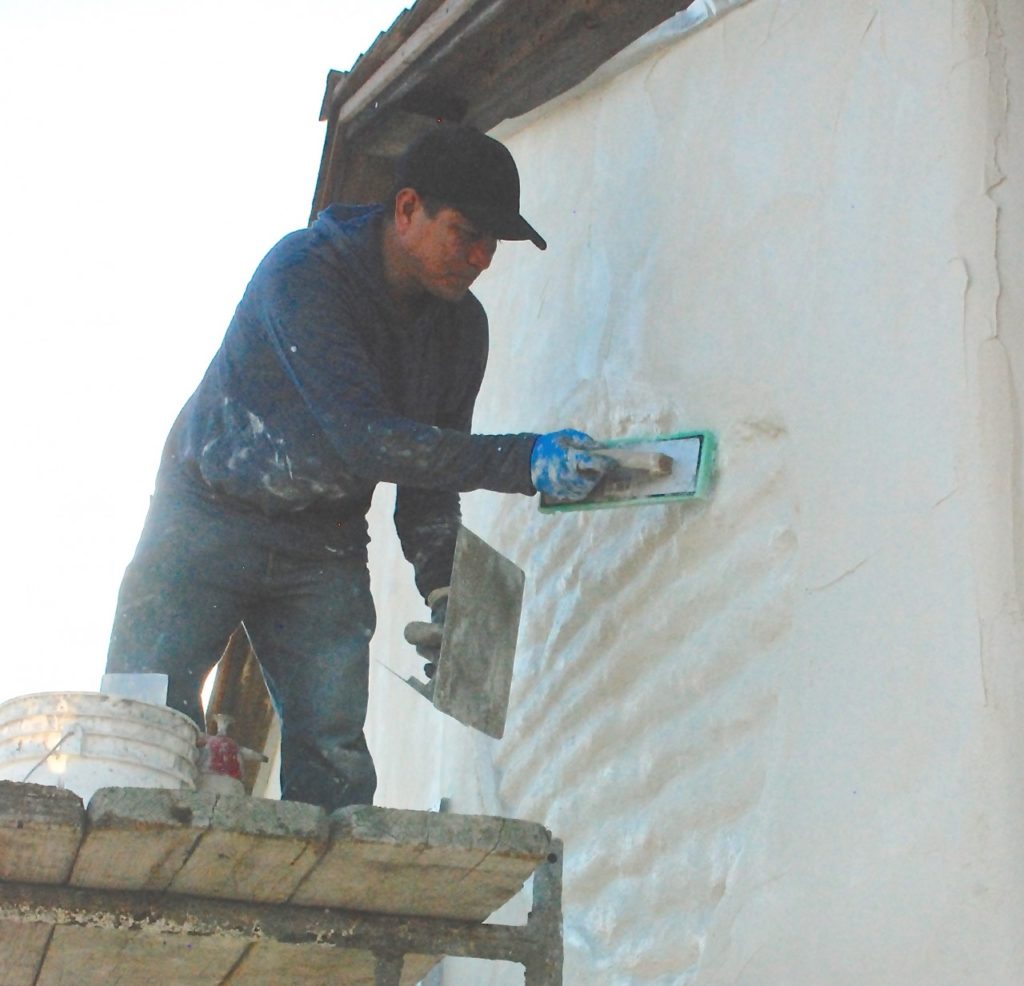 A worker with Gomes Plasticorners Inc. applies a finishing coat of plaster to the wall of the Juan de Anza House, fronting Franklin Street in San Juan Bautista on Feb. 3. A historic San Juan Bautista adobe has been freshened up and given minor surgery that will leave it standing well beyond its estimated 209 years of age.

The Juan de Anza House at Third and Franklin streets houses the home and business of owner Emily Renzel. She operates Old Adobe Antiques in the left portion of the adobe, fronting Third Street.

J G Plastering Inc. of San Juan Bautista was the contractor. Workers from the company finished the last coat of lime plastering on Feb. 3. The restoration process began last August.

The Juan de Anza House is one of only four historic adobes still standing in San Juan Bautista. It was designated as a Registered National Historic Landmark in 1970 by the U.S Department of the Interior and National Park Service as No. 70000140.

The National Register says the house was built in 1830 and enlarged in 1850. But Renzel has found evidence that the adobe was actually built in 1799, two years after the founding of Mission San Juan Bautista.

Renzel believes the house was built to house people who built the mission or as a barracks for soldiers.

“I think there’s plenty of evidence that an adobe structure was here (in the late 1700s) and it was structured somewhat differently,” Renzel said.

She bases her theory on the date 1799 painted on the wall. Also, there was painted wainscoting similar to what was on the mission’s walls. Evidence of an older structure can be seen in the building’s attic, she said. And several courses of bricks were added when a peaked roof was built.

The adobe originally had a flat roof made of logs and mud and an adobe brick floor.

Before launching the restoration project Renzel had Garvaglia and Associates, preservation architects, do an inventory of the house. The report was presented to the city of San Juan Bautista, which approved an administrative permit for replacing the plaster.

Because the house is on the Registry of Historic Places, Renzel was required to preserve as much of its significant historical elements as possible.

The project began by stripping off all of the exterior plaster down to the adobe bricks. Workers also removed quite a lot of chicken wire used for re-enforcement. Cracks in the bricks were filled with lime plaster and pieces of roofing tile, to form a stronger bond.

Five coats of plaster and a finishing coat were applied to the outside walls during the process. There was plastering on the inside walls as well.

On the Third Street side a couple of doors had remnants of old headers lower than current door openings. There was no header over the Franklin Street window, so a 6-inch by 8-inch redwood header was installed.

There were a few other problems that required fixing as well: deteriorated adobe underneath the mounting of metal angle supports for the awning; adding sealant to seams connecting roofs; adding trim board to the upper part of a door along Third Street; adding a skirt on the shop window along Third; adding mesh re-enforcement on the adobe’s corners; rebuilding the outer part of the rock foundation along Franklin Street.

Given its age, the adobe has stood the test of time quite well. But as one of Renzel’s aquaintances says, “Old age doesn’t last forever.”

Third Street in San Juan Bautista was once part of Highway 101. Trucks and cars drove past the adobe day and night, raising dust and grit. Add weathering and earthquakes to that formula and you have a recipe for deterioration.

Renzel bought the adobe on Dec. 27, 2007. She purchased it at auction on the San Benito County Courthouse steps after former owner Pepe Espinoza lost it through foreclosure. He had owned the building since 1998.

“It was one of those things that I had always loved,” she said of the adobe. Until she purchased it, she had only seen the inside once. That was in 1988. “The place was jammed to the rafters with stuff,” she recalled.

Renzel had tried to buy the building from Charlie Beck, who owned it before Espinosa bought it. Beck Declined the offer. He left it to his nephew who sold it to Espinosa.

Espinosa added a rolled roof in back without a permit, but Renzel said that probably played a major role in preserving the adobe. He left everything historical in tact. She added a new roof last year.

Before Beck owned the structure it had been owned by E.G. Johnson, who owned an antiques shop in Los Angeles during the Great Depression. Johnson moved to San Juan Bautista and rented a room in it from then owner Charles Kessling before buying it from Kessling. Both Johnson and Beck sold antiques out of the building.

Renzel has seen letters Johnson wrote to family members about the adobe in the 1930s, saying he had found contentment living there. “They’re a good reference for this building,” she said.

Renzel opened her antiques shop two years after buying the building. “I wanted to keep it open to the public somewhat,” she said. The shop is open Friday through Sunday for five hours a day.

She had never been an antiques dealer before, although she grew up among them in San Jose.

“I have just been flying by the seat of my pants here,” she said. “I’m more like the old curiosity shop. … I like cast iron and metal and carved wood and objects that are sort of unusual. I have fun with it,” she said.

Renzel is a fourth-generation Californian. Her great-grandfather opened a bakery in San Jose in the 1920s, which morphed into a wholesale grocery store and a retail grocery store.

San Juan Bautista residents have said they like what Renzel has done with the adobe. Although there was one exception.

During the plastering, she said, a man poked his head inside the adobe and said, “You’ve ruined the building,” Renzel said.

“I think in this town everyone feels, not like they own the building, but they take ownership in the building. They love this old building. Any changes are unsettling to people.”