Chair of the Amah Mutsun and representatives from other Native American tribes gather to protest the historic highway markers. 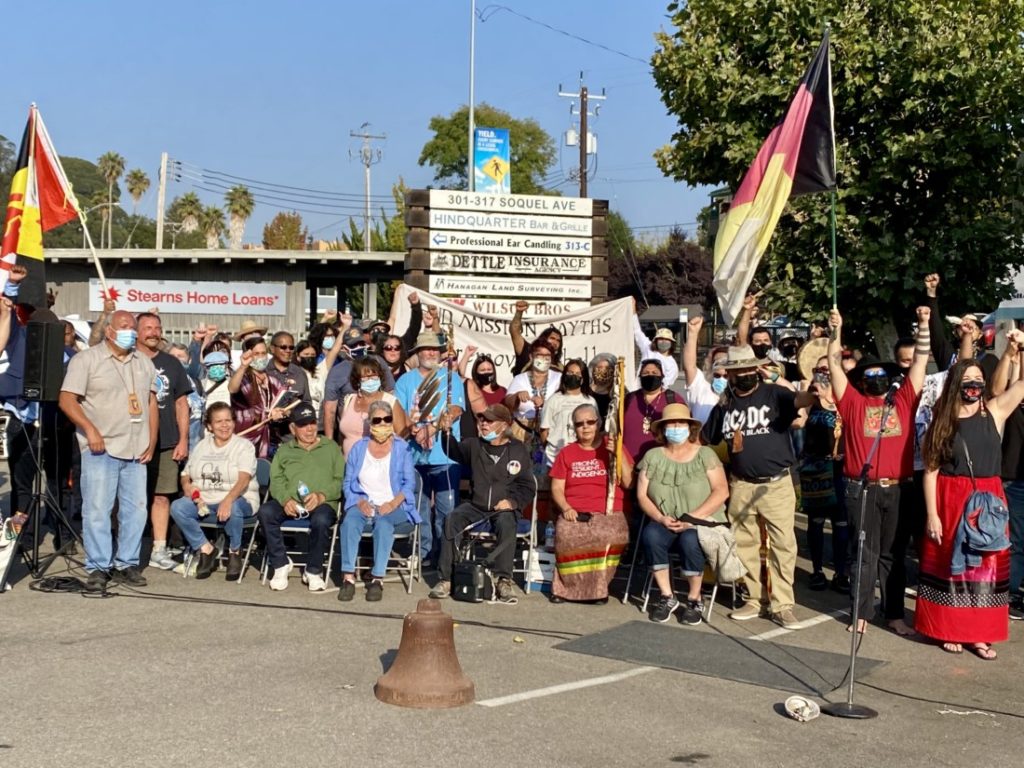 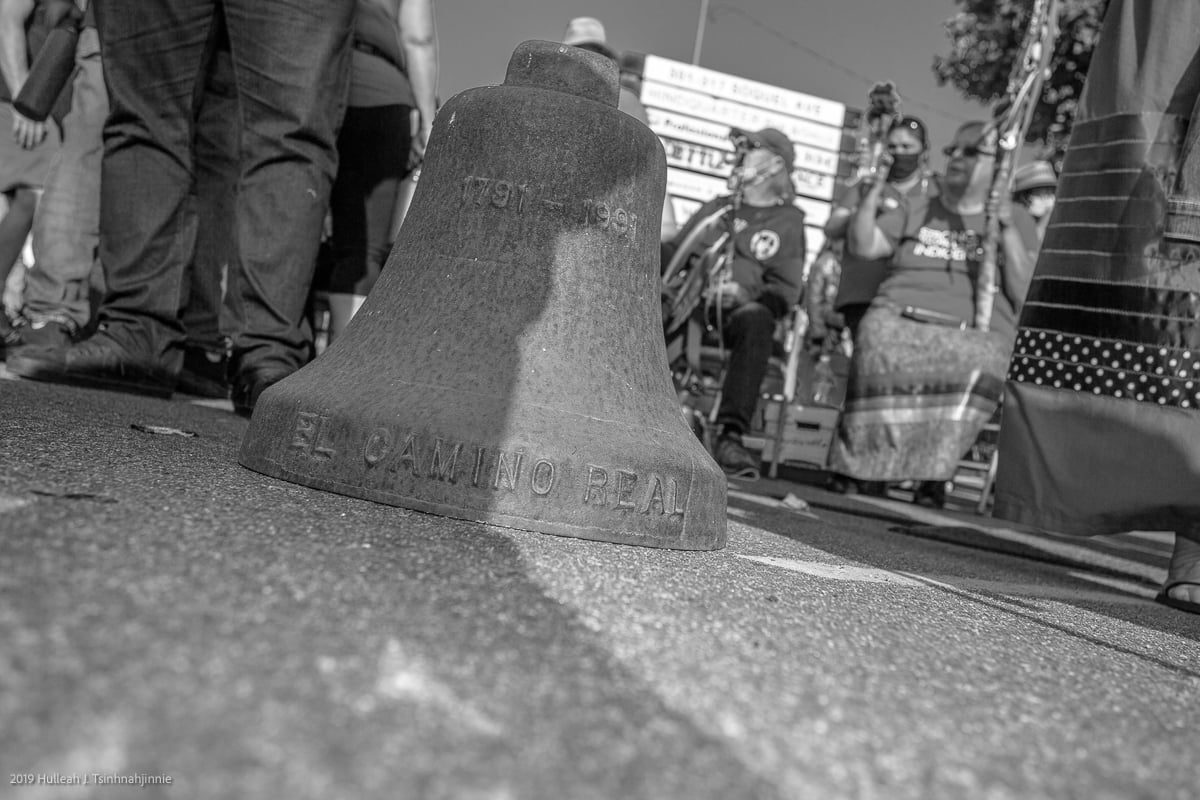 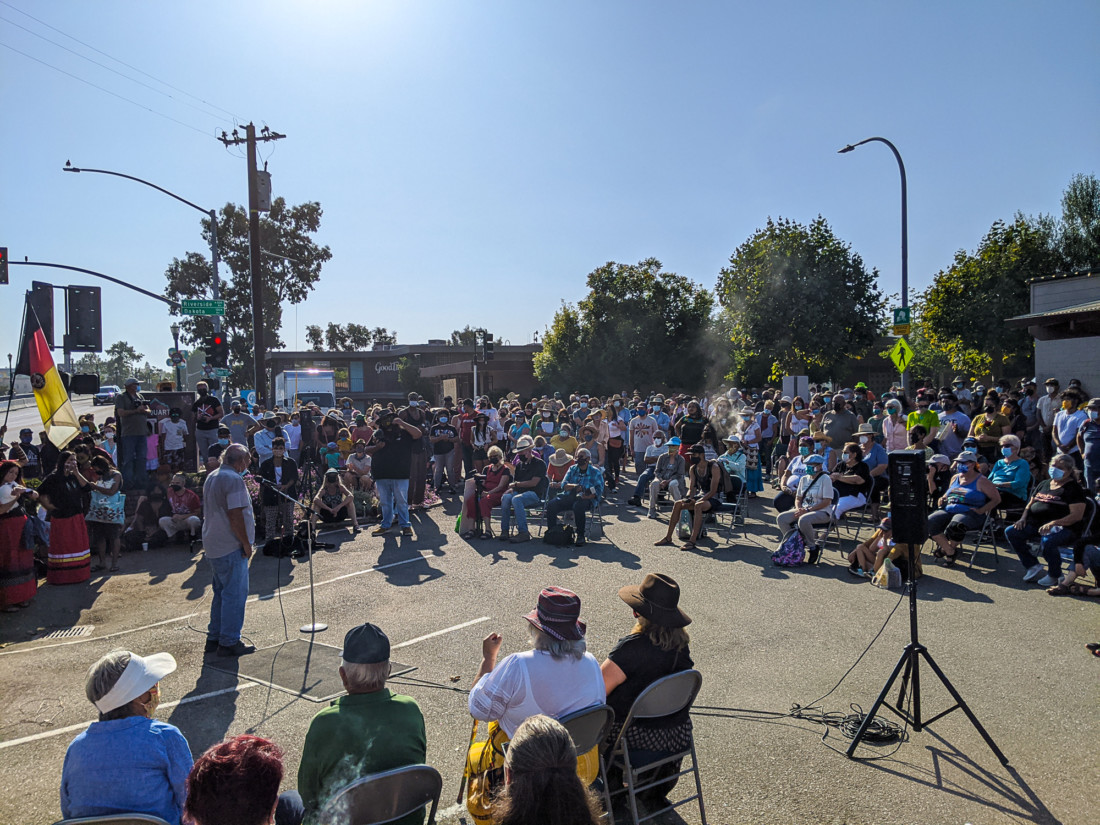 On Aug. 28, the Amah Mutsun Tribal Band joined with the city of Santa Cruz and a crowd of around 100 spectators to remove the last of three El Camino Real bells on public property in that city. The bell, located at Soquel and Dakota avenues, was to be removed with the city’s approval, following a November 2020 recommendation by the Santa Cruz Historic Resources Commission.

The bell, however, was removed illegally by vandals just hours before the gathering. The Santa Cruz Police Department is conducting an investigation, according to a Twitter post by police chief Andy Mills.

Two other bells in the city have previously been removed, both in June 2019. The first was on the UC-Santa Cruz campus and taken down by officials there. The second, in Mission Park Plaza, was stolen during a protest on June 11.

“Many people associate the bells with the missions,” said Valentin Lopez, chair of the Amah Mutsun Tribal Band. “They were placed there to attract tourist dollars and get people to go visit the missions. But to us, those bells represent control over our ancestors. When it was time to get up, time to go to work, time to eat meals, time to pray, time to go to bed. They were dominating and destructive to our ancestors.”

According to John Kolstad, owner of California Bell Company in Saratoga, the original intent of the bells was to mark the supposed route of El Camino Real (later Hwy. 101) when it was little more than a dirt road. Starting in 1906, over 400 bells were placed as a guide along the road at one-mile intervals—if travelers drove a mile and did not see a bell, they would know they were no longer on course.

Santa Cruz Mayor Donna Meyers spoke at the event, saying she was honored to be the first city in California to remove the bells.

“We do not take this honor lightly,” she said. “We will carry forth this seed to other communities throughout California and will work to get all the bells down if we can do it. We will continue to tell this story wherever we can.”

Lopez says that this is the first step to a larger effort to remove the bells and educate people on the struggle of native peoples under the mission system.

Over 15 representatives of native tribes and organizations spoke at the ceremony, including Kumeyaay Ipai elder Stan Rodriguez from Poway. “I wanted to acknowledge the bravery of the community in saying ‘no more,’’’ said Rodriguez. “No more of these lies that have been perpetrated on our people that the California Indians were peaceful and they loved the missions. Our people fought back and that needs to be in our history too. We are powerful, we are unbreakable. We can do many things together and that’s what I see today.”

Removing all the bells would be a daunting task. Caltrans continues to install the bells, having ordered over 550 of them from California Bell over the last 21 years. According to the California Bell website, there are about 585 bells currently in place along Hwy. 101. California Bell has produced over 5,500 mission bells for use by churches, institutions and private individuals around the world since Kolstad bought the business in 2000.