Michael Anderson has faced criticism from district and elected officials since 2017. 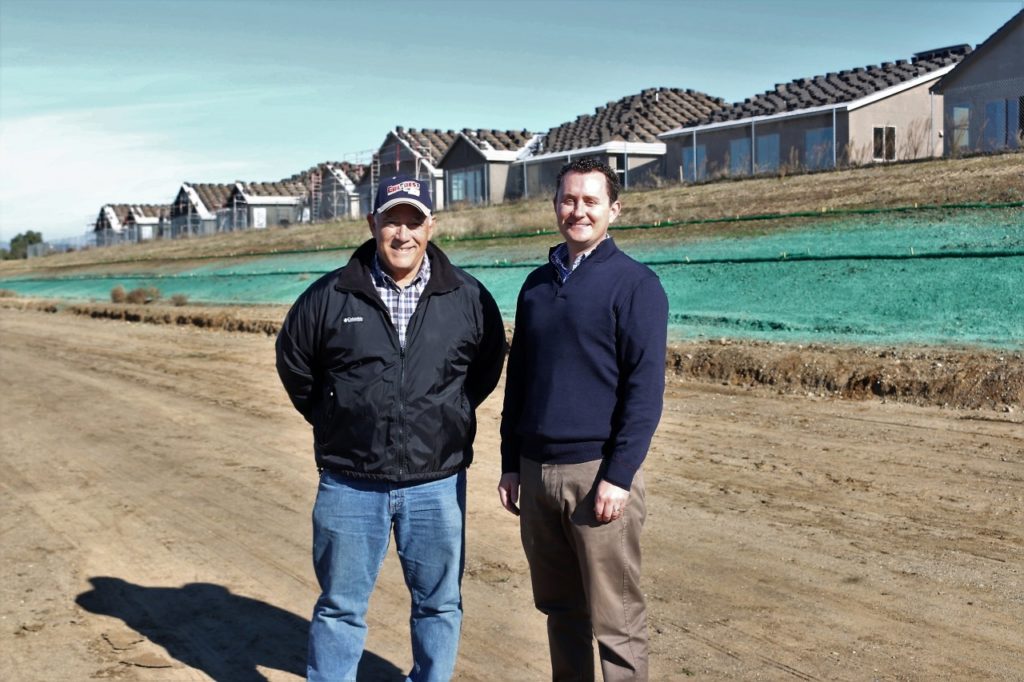 (Left to right) Frank Guerra and Michael Anderson stand where Santana Ranch Drive, the future entrance to a new middle school site, will eventually be constructed. Photo by John Chadwell. Though a new, $36 million middle school is in the works for the Hollister School District (HSD), the path leading up to its construction has been complex and at times frustrating, especially for development partner Anderson Homes.

Vice President of Operations Michael Anderson, developer of the Santana Ranch housing subdivision, has faced criticism from school district and county officials who said he refused to cooperate in negotiations on the new school site and took advantage of the county on the price of the land.

He has not publicly defended himself up to this point, but after family members and employees pleaded with him to rebut the criticisms, Anderson was persuaded to discuss his experience with San Benito County and Hollister School District on the middle school project.

Anderson and partner Frank Guerra spoke with BenitoLink by phone on Dec. 21, and at Santana Ranch on Jan. 3, to give their side of the story.

Anderson said the new school site was never going to be donated to the district, as some in the community, including HSD trustee Rob Bernosky, appear to have hoped or believed. When Bernosky brought up the topic of a donation at a March 2018 town meeting, former County Supervisor Pat Lowe said the land was never going to be donated. Guerra, president of Guerra LLC, a one-third owner of the land making up the 200-plus-acre project, added that Lowe (who did not vote on the project) was not generally in favor of large developments but set the record straight.

Anderson said he did not know why people believed the site could be donated, considering the millions of dollars of services, including roads and utilities that would have to be built. He said the development agreement (see PDF of development agreement below) clearly spelled out the company’s responsibilities and that HSD would pay for the land.

The company’s specific plan was approved in 2009, Anderson said, and the development agreement was approved in 2010. He said he worked with the school district over the last 10 years and with the two previous superintendents on purchasing a site for the new school.

Anderson said he was blindsided by comments made by former HSD superintendent Lisa Andrew following years of cooperation with district superintendents and staff. On Sept. 26, 2017, Andrew told San Benito County supervisors that the elementary school district was frustrated over negotiations with Anderson Homes concerning what she called the “inferiority” of the future location of a $36 million middle school.

She also said, “We were working with the developer to try to mitigate that [fill dirt] because we’re supposed to get a buildable piece of land, only to be told behind closed doors that after many months that, ‘I’m sorry, we’re not going to be able to help you with that.’”

What she did not say was that two previous superintendents had already approved the site, and that Anderson Homes had already spent $1.1 million to move and stage 42,000 metric tons of dirt to fill in the construction site, according to Anderson.

From their individual statements at the time, county supervisors appeared to agree with Andrew’s opinions. Though Supervisor Anthony Botelho said he was surprised to hear negotiations were not going well, he went on to deride Anderson on the price of the land.

“Now, they want an arm and a leg for the school site,” Botelho said at the 2017 meeting. “Situations like this continue to demonize developers. Usually, we try to blame out-of-town developers, but these are in-town developers.”

Even pundit-turned-politician Marty Richman, who was elected to the Hollister City Council on Nov. 6, remarked in 2017 on the sale price of the land, which is described in the development agreement as going for less than full-market value. (See PDF of the school site purchase agreement below.)

BenitoLink recently asked Botelho and Richman if they still felt the same way as they did in 2017.

Botelho responded Jan. 22: “Yes, I did say that and meant it in the context of the discussion we were having. And do believe it to be true, and stand behind the comment.”

Richman said Jan. 25 that based on what he knew at the time he stands by his comment and reiterated that the county needs to work smarter to assure its development plans benefit the county and not necessarily the developers.

Commenting on Andrew’s assertion that the developer and school district had paid for their own appraisals of the land and that they were “worlds apart,” Anderson said the school district’s own consultants advised him to have the appraisal done after construction was well underway, making the market value of the land higher. He said the district’s appraisal did not take this into consideration.

“We put together a draft purchase agreement, but given the economy at that time (2009-10), the district thought it was a little early to get into an agreement, but it has always been clear the district would purchase the site,” Anderson said. “We sold the site at less than half of its appraised value of $10 million.”

It took more than 20 years to secure federal, state and local approvals, which included purchasing mitigations for the land and building the surrounding infrastructure for what originally was to be an eight-acre site that had expanded to 12 acres. Anderson said the school district’s negotiators were diligent and wouldn’t have gone along with the agreement if it had not been in the district’s best interest.

Hollister School District paid $5 million for the school site as a package deal that included the land and $1.76 million in pre-development services, such as mitigation credits, access to storm drainage, and infrastructure to serve the school. Anderson said Gabriel Moulaison, HSD’s assistant superintendent of business services, was particularly helpful with advice on how to structure the purchase price to cover the initial infrastructure costs and to maximize state contributions to the district.

Moulaison broke down the numbers for BenitoLink via email: The land actually cost about $2 million. About $1.5 million was spent on mitigation credits and another $1.1 million was paid for fill dirt to properly grade the site.

The state should reimburse the district for half of these costs, Moulaison said, but “the state will only reimburse the district for 50 percent of the cost of the land up to the amount of our appraisal. Our appraisal was $2 million. We are also going to submit a request for the other two items for 50 percent reimbursement as cost of preparation or construction. The total possible reimbursement is $2.5 million if we break out the transaction this way. If we paid $5 million only for the land and lumped all of that together, we would only be able to ask for the 50 percent of our appraisal of the land, which would have been $1 million.”

Guerra said there was also discussion on foregoing school credits for each new home or apartment to help pay the $5 million, but that did not happen, according to Moulaison.

“The district had to turn that down in order to receive state facilities bond funding. We have to show that we are collecting the maximum amount of developer fees we could possibly collect,” said Moulaison. “By forgoing collecting developer fees in exchange for the land we would be putting that funding in jeopardy.”

Now each home built has nearly $10,000 in fees that go to Hollister School District and San Benito High School District, adding up to nearly $10 million in impact fees. Anderson added dryly, “Considering all the money issues between the county and HSD, I hope the schools get their money.”

“There was also fill-dirt services,” Anderson noted. “The previous supervisors had selected three different locations and the property owner agreed to work with the district. After selecting the final 12-acre site, they needed about 45,000 cubic yards of fill dirt to give them flexibility to reduce costs. We purchased mitigation credits so we could move that dirt and we’re storing it on the community park site so when the school is ready to go they have easy access to it.”

Anderson said he does not know when groundbreaking for the school will take place. Once it happens, though, he said Anderson Homes will coordinate with Hollister School District on when to begin work on Santana Ranch Drive, the entrance to the school site which will be constructed after the school is completed, in order to prevent damage to the road from trucks. As the fill dirt is moved to the construction site, Anderson Homes is expected to begin work on a 5.8-acre park.

In September 2017, Andrew claimed Anderson Homes told the school district that it had no intention of building the park. She also claimed the district would be forced to pay for preparing the school site.

However, Brian Curtis of Stonecreek Properties, which is working with Anderson Homes, disputed Andrew’s claims during the supervisor meeting.

“We designed that site for a school since day one,” Curtis said at the time. “There may be a misunderstanding, but all the services for the school do exist.”

As for the park, Anderson said construction was originally scheduled to begin after the 300th home was occupied.

“Then the school and county agreed it would save a lot of money if we could have the fill dirt adjacent to the school site on the future park site,” he said. “Then the school could use it on an as-needed basis. We want to get started on the park. We’re hoping the school breaks ground this spring and takes the dirt, so we can build it.”