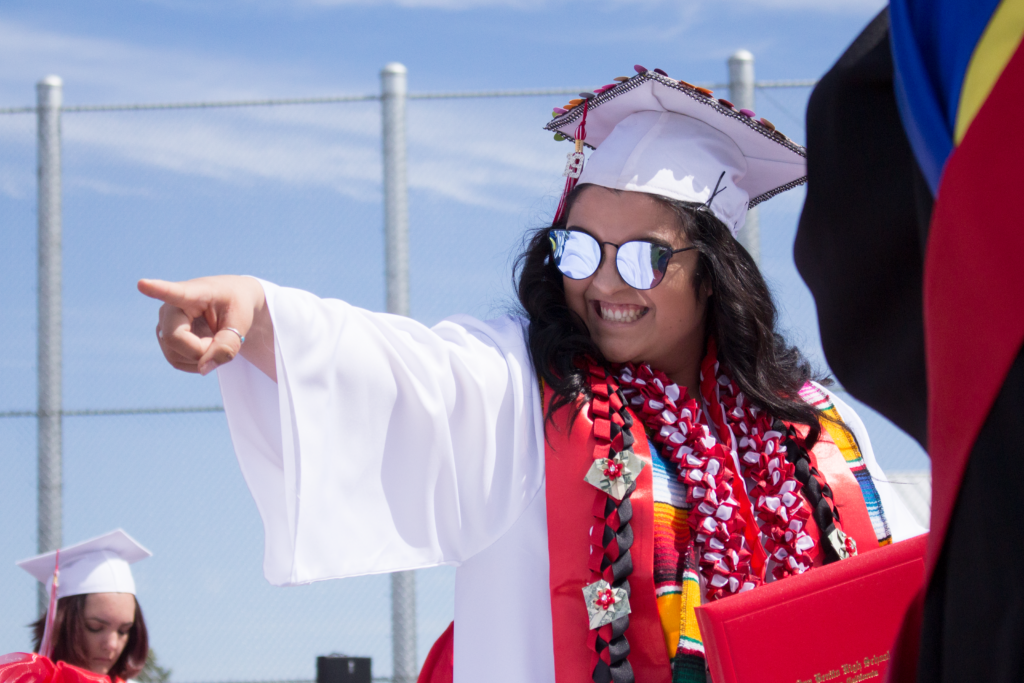 Serena Garcia points to other graduates as she walks down the stage after receiving her diploma. Photos by Noe Magaña.

It was a familiar scene at the San Benito High School 124th graduation ceremony on June 7 with red and white gowns, caps and sashes, emotional speeches and performances by members of the graduating class.

Among those who spoke to the 650 graduates and over 6,000 attendees was Senior Class President Alyssa Ito, who used lyrics from country songs to describe each of her four years at school. Ito used Scotty McCreery’s “Five More minutes” for senior year.

“But now, yes, the time has come and our last five minutes of high school are now in the past, and what is left is the future,” Ito said in her speech.

The lyrics described the feelings that Starr Wolf had after seeing her oldest daughter graduate. Reflecting on raising her daughter Shealynn, Wolf said that it seemed like it took the blink of an eye for her to reach high school and wished she could have five more minutes with her.

Wolf said her most memorable moment with Shealynn was when she, at five years old, decided to be a beautician and cut her sister’s hair as well as her own.

About 13 years later, Shealynn decided to pursue a career in agricultural business at an Arizona community college where some of her family members live. She said being in Future Farmers of America was not only her favorite part of high school, but also influenced her choice of career path.

Public Information Officer Adam Breen said in a press release that about 325 students will continue their education at community college, with the majority choosing local schools.

Christian Duarte preferred joining the Job Corps in San Jose to become a welder. Duarte said his time at San Benito High School was interesting. The football player said he will miss his friends, as he is accustomed to seeing them every day.

Dario Duarte and Carrie Sequeira, Christian’s parents, said they were proud of their son. Overcome with emotion, Sequeira said Christian’s graduation meant a lot to her and that she expects great things from him. Dario said he expects his son to continue learning and filling in the next chapter of his life.

Despite the graduates participating in the annual ritual of hitting a beach ball around during the ceremony and school officials eventually confiscating it, this year’s commencement had a different feel.

Because the ceremony took place on the new multi-purpose athletic field, attendees weren’t allowed to bring real flowers, flower leis or wear high heels, in order to prevent damage to the turf. The compensation was a fireworks show at the end of the ceremony.

“Because they had a lot of ‘noes’ this year, we decided to end their year with a bang and give them a fireworks show,” said Laurie Chavez, graduation coordinator since 2006.

Chavez said the ceremony was a success and credited all involved including the Graduation Parent Committee led by Betsy Lemay, along with maintenance staff, security, and administration.

This year served as a practice round for when the school hosts the 2020 graduation at the new Andy Hardin Stadium on campus. While challenges regarding the field turf will remain, one perk of moving the ceremony is an increase in available seats. Students have received a maximum of 10 tickets in recent years, but increased seating capacity means students can obtain more tickets for family and friends.

“I’m looking forward to seeing what it’s going to be like at the stadium,” Chavez said. “Maybe there are some possibilities of going from a morning to an evening graduation. There is a possibility of doing more because we have a bigger space in that area.”