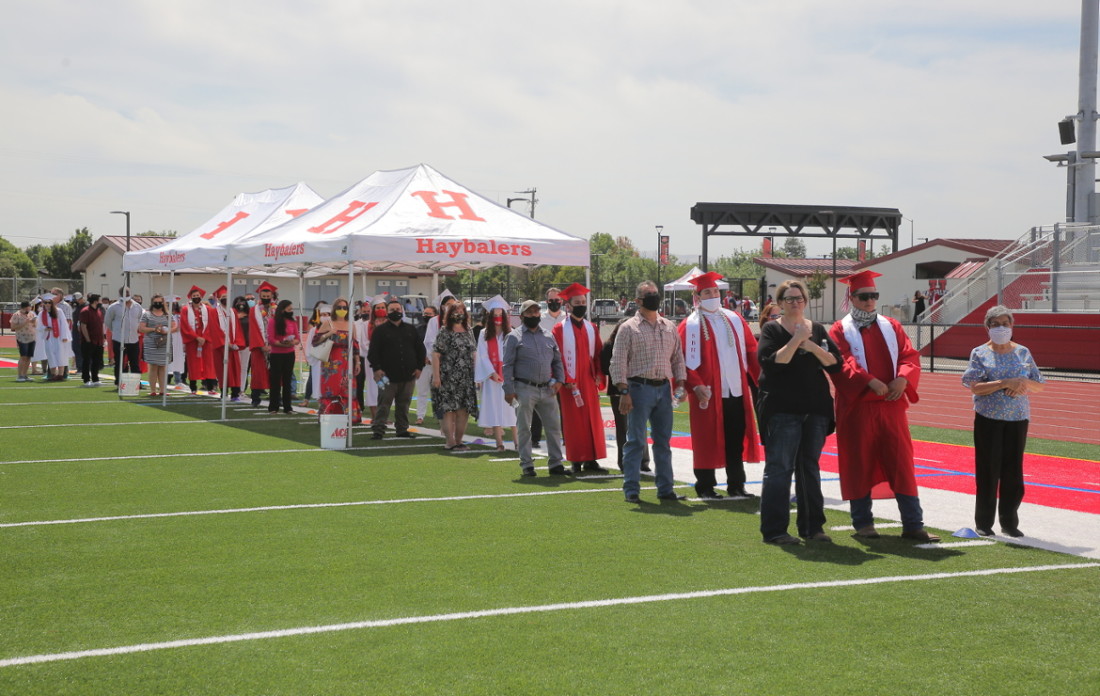 Graduates walked in a single line with two guests during the 2020 graduation ceremony. Photo by Robert Eliason. 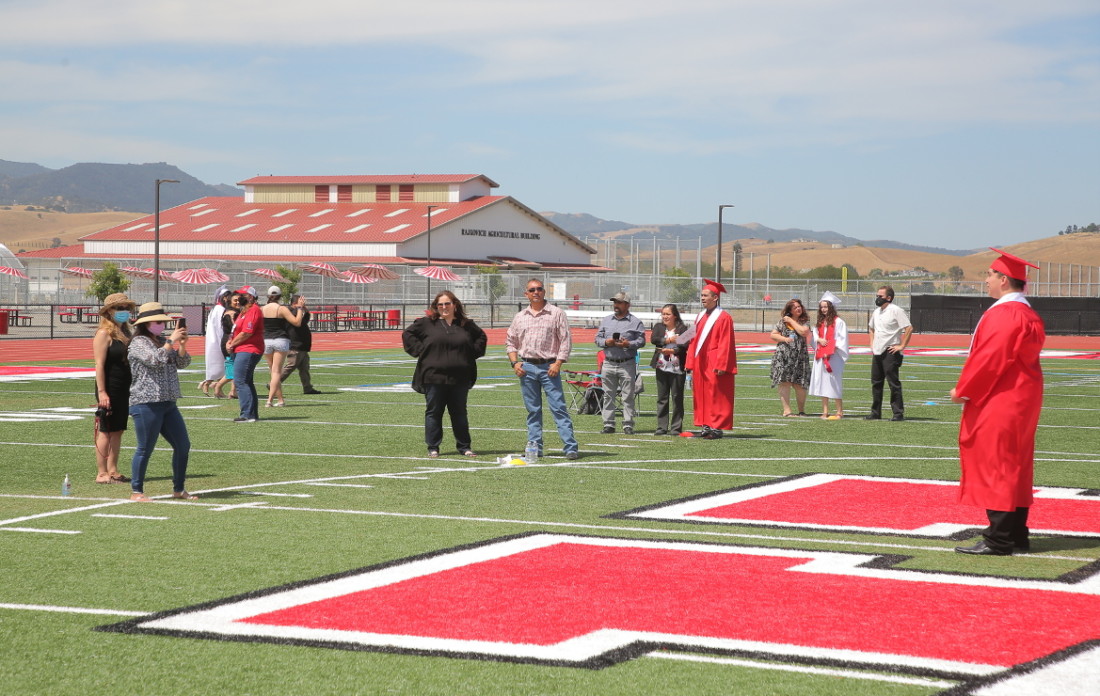 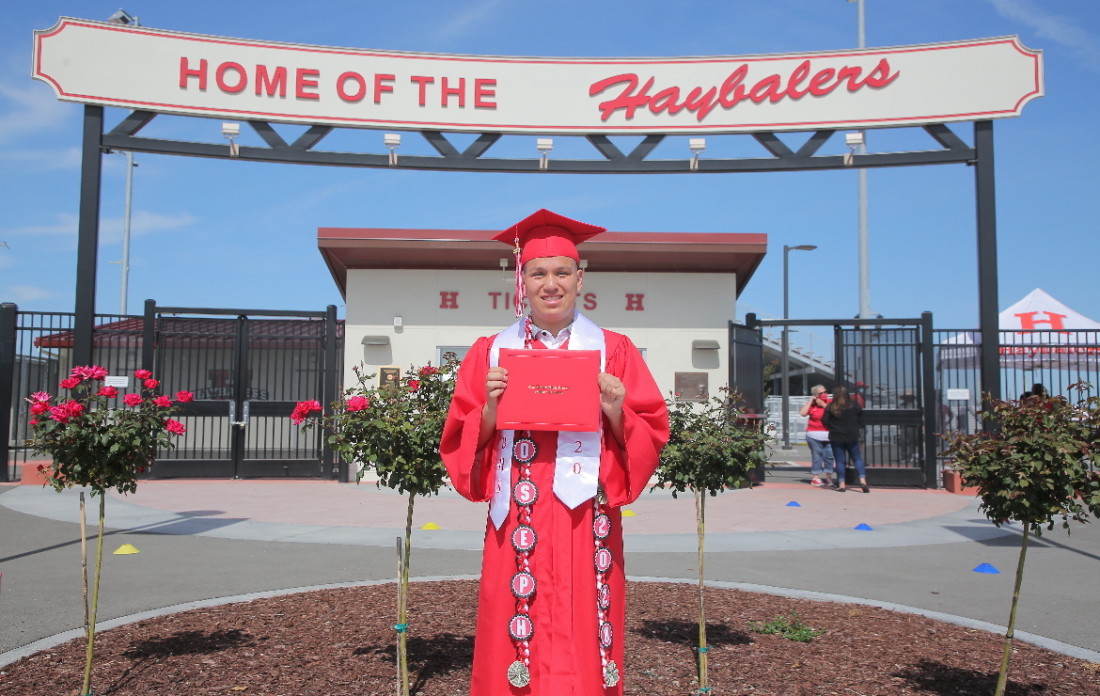 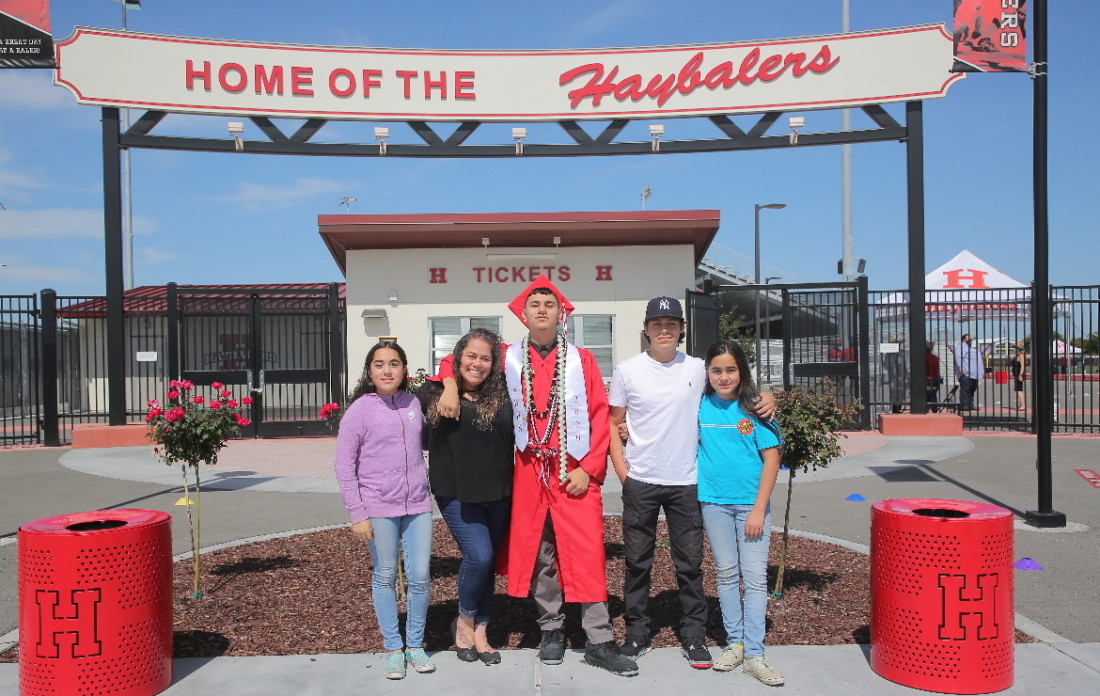 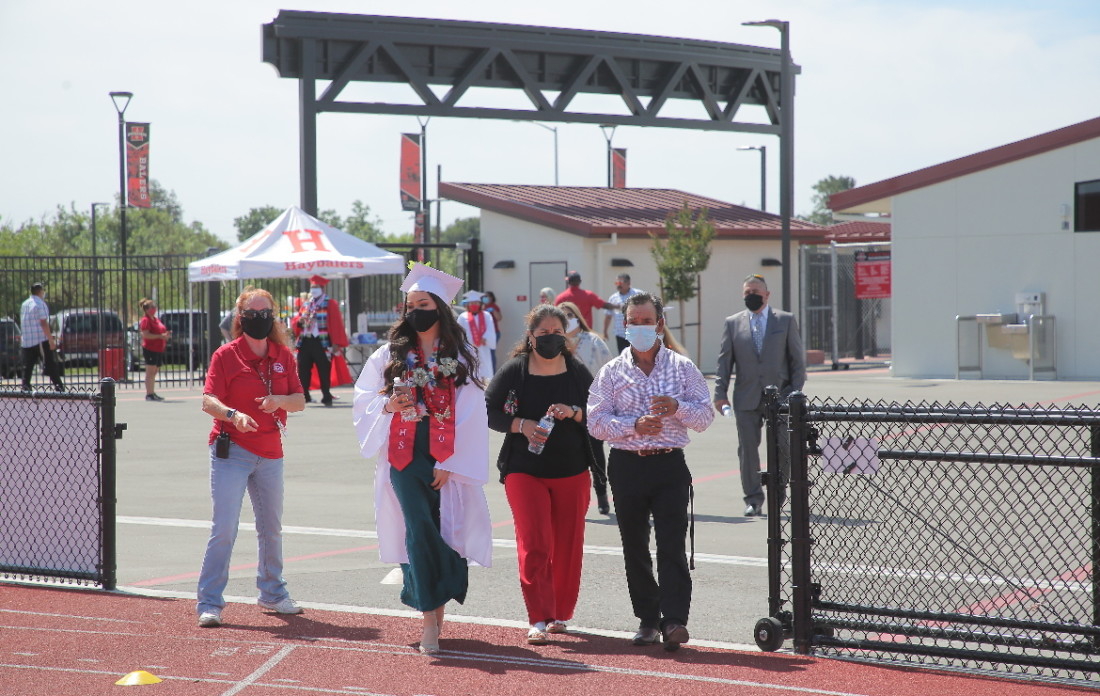 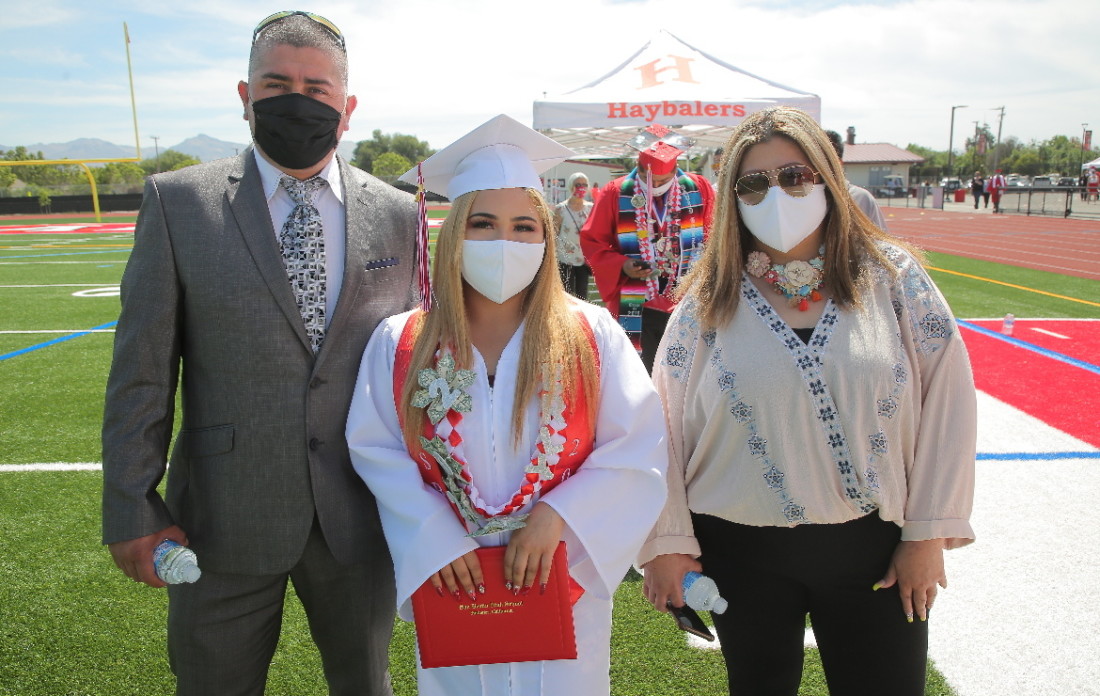 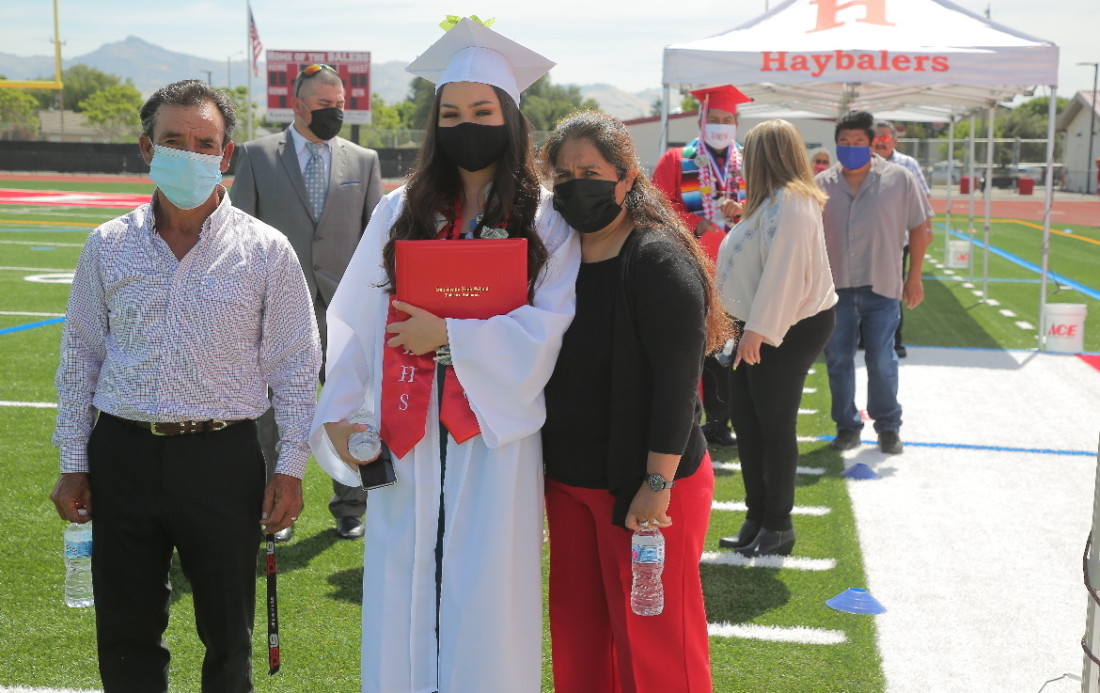 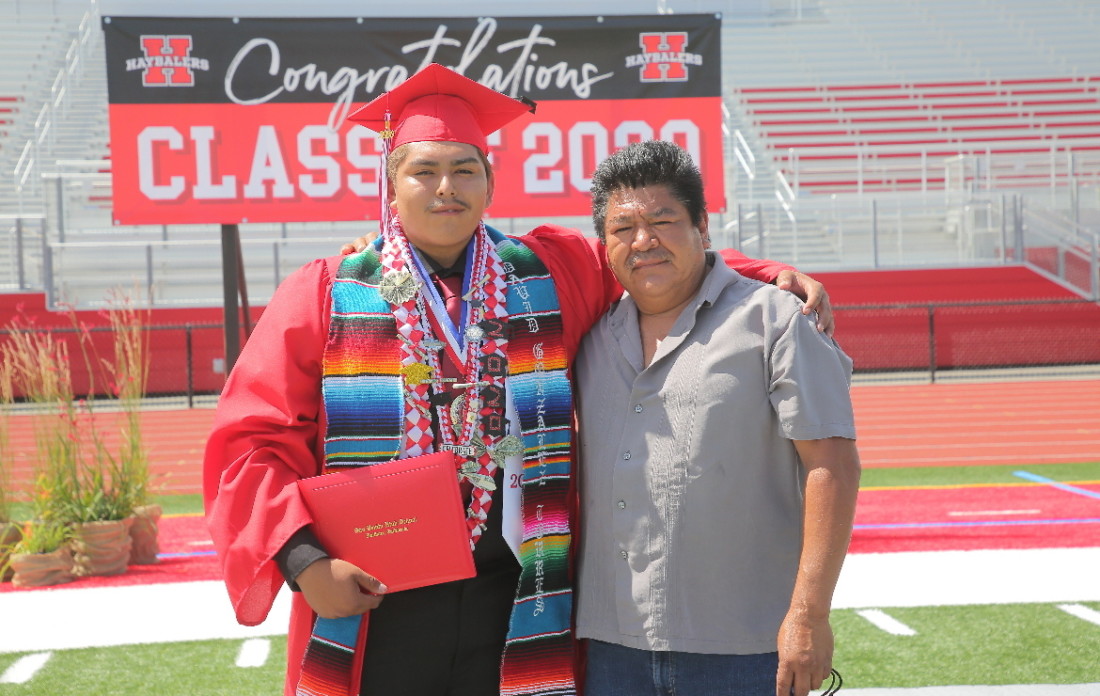 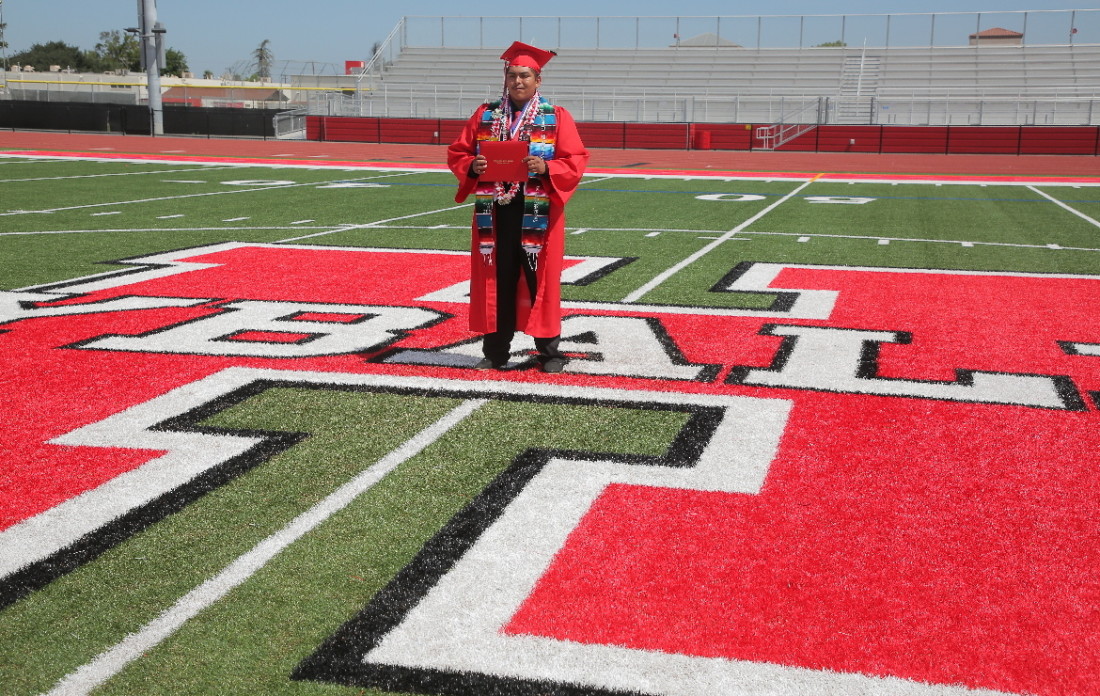 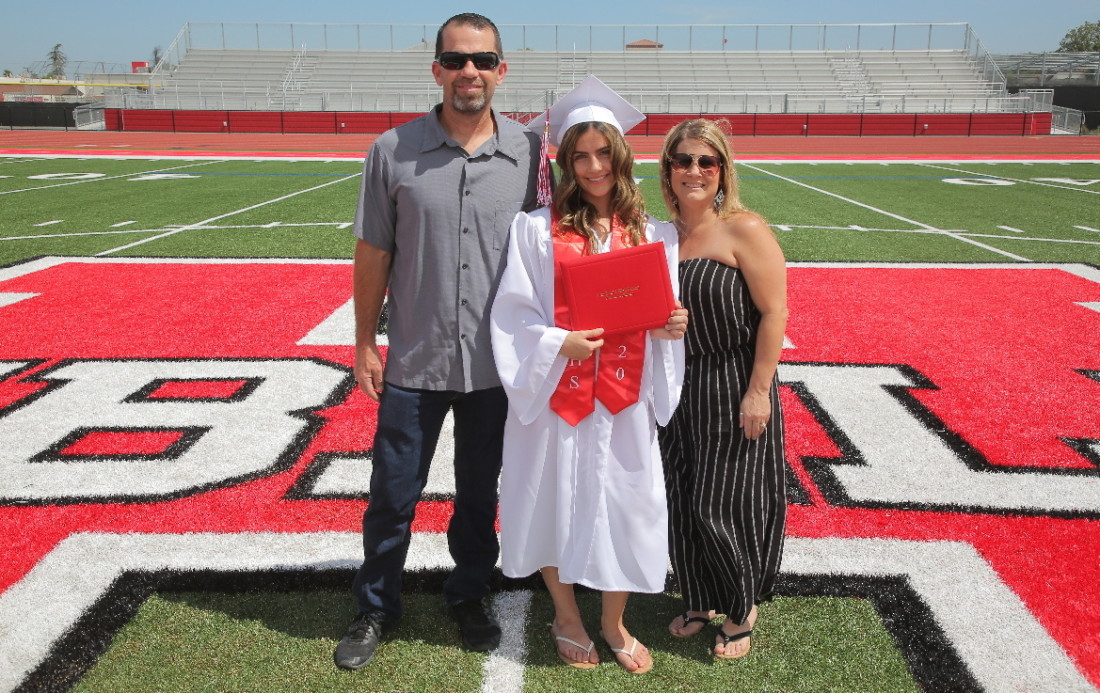 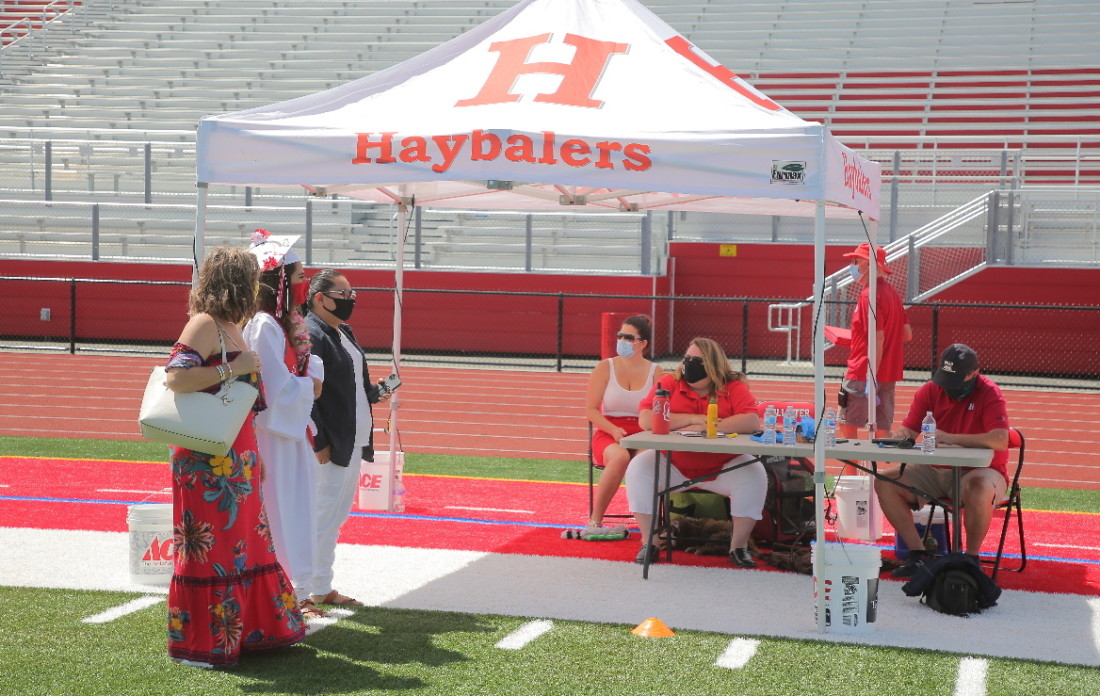 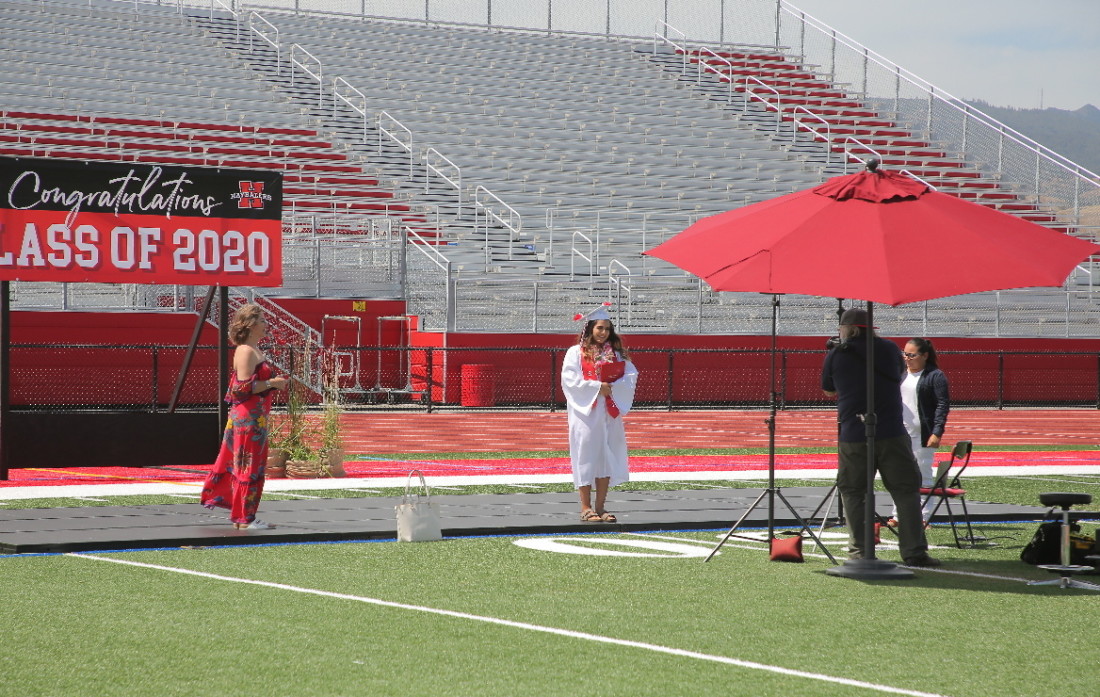 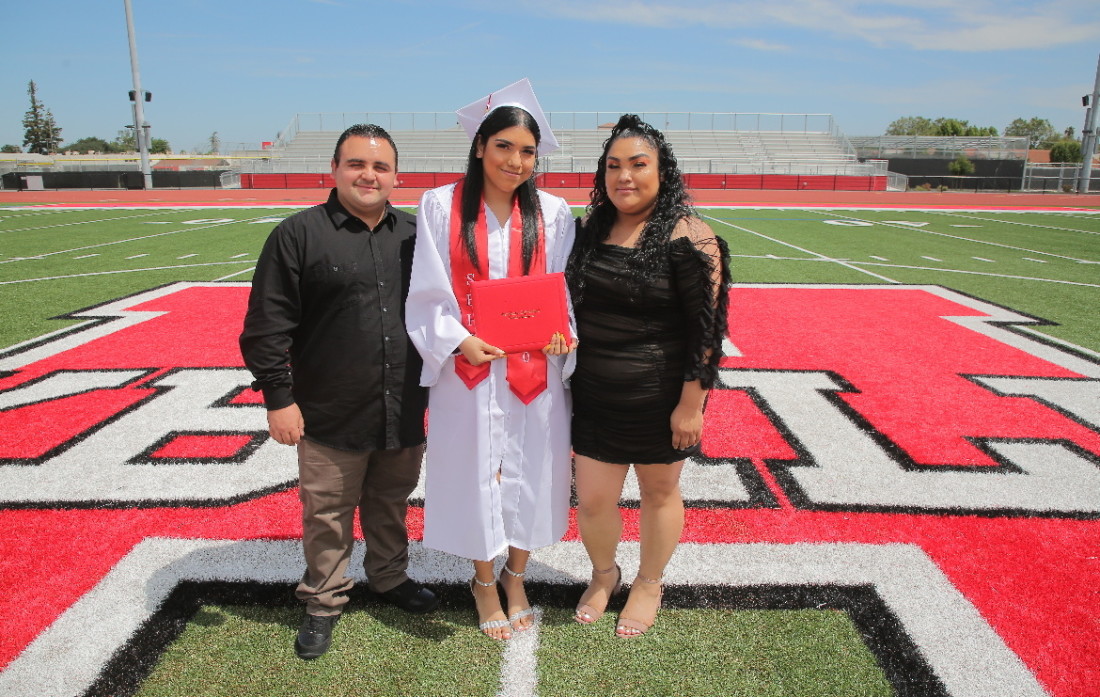 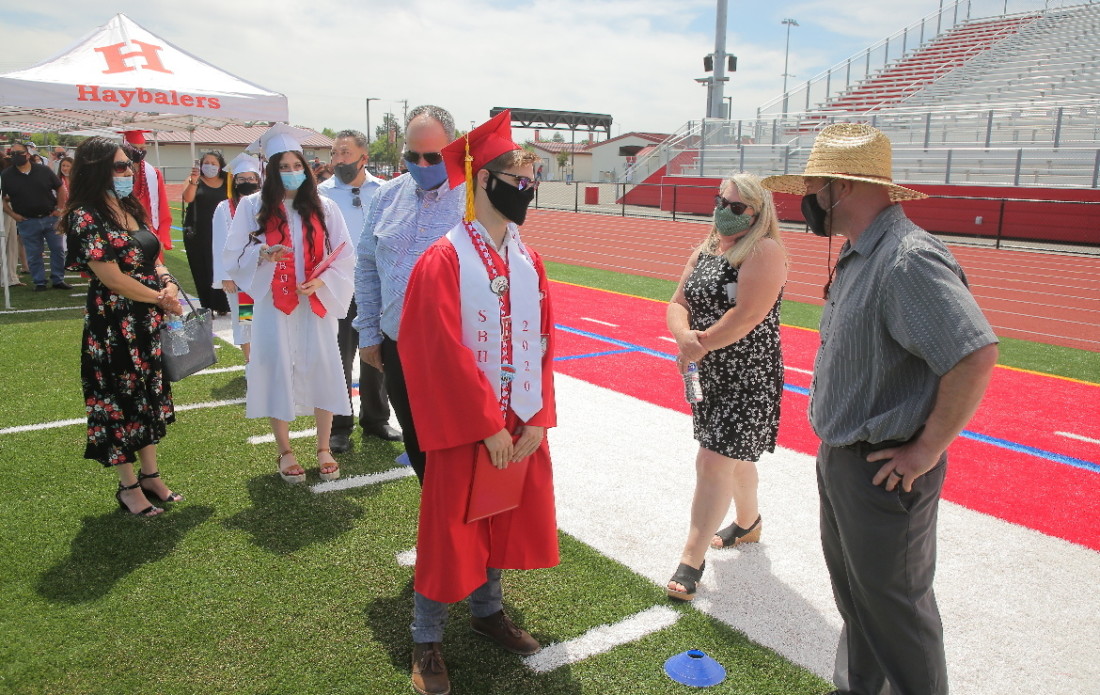 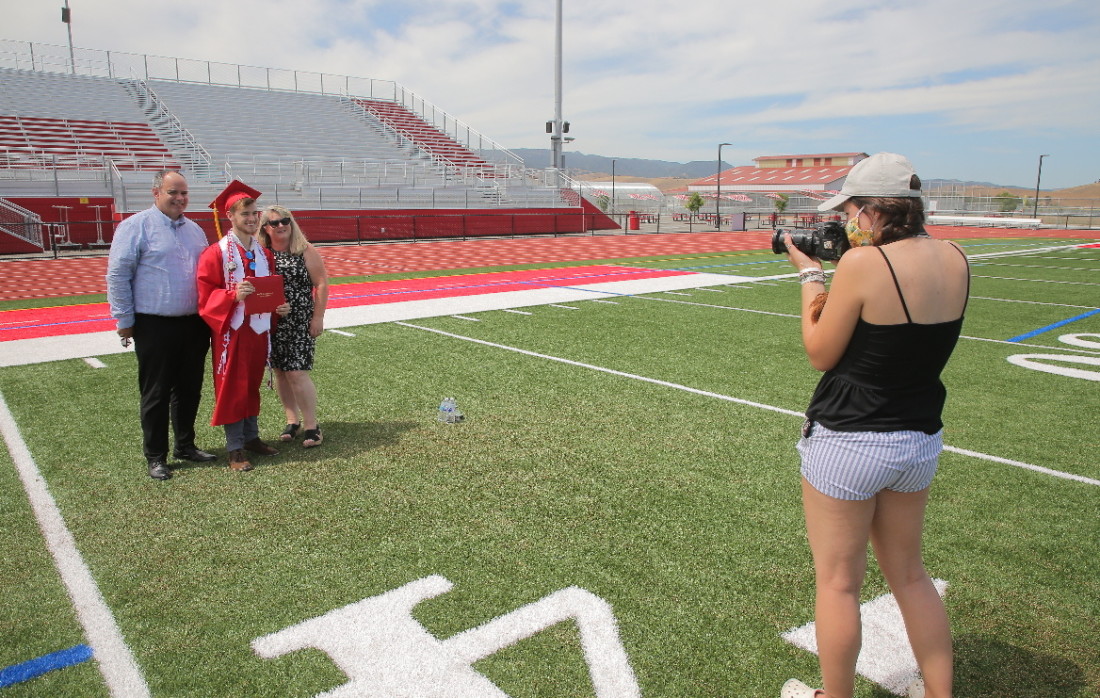 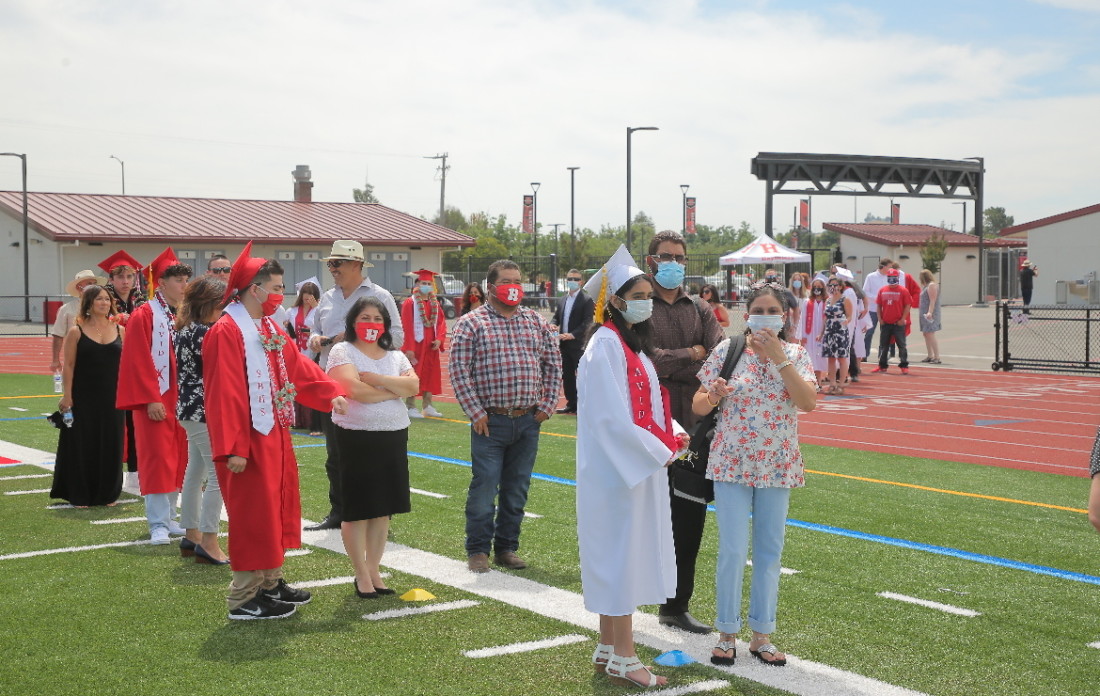 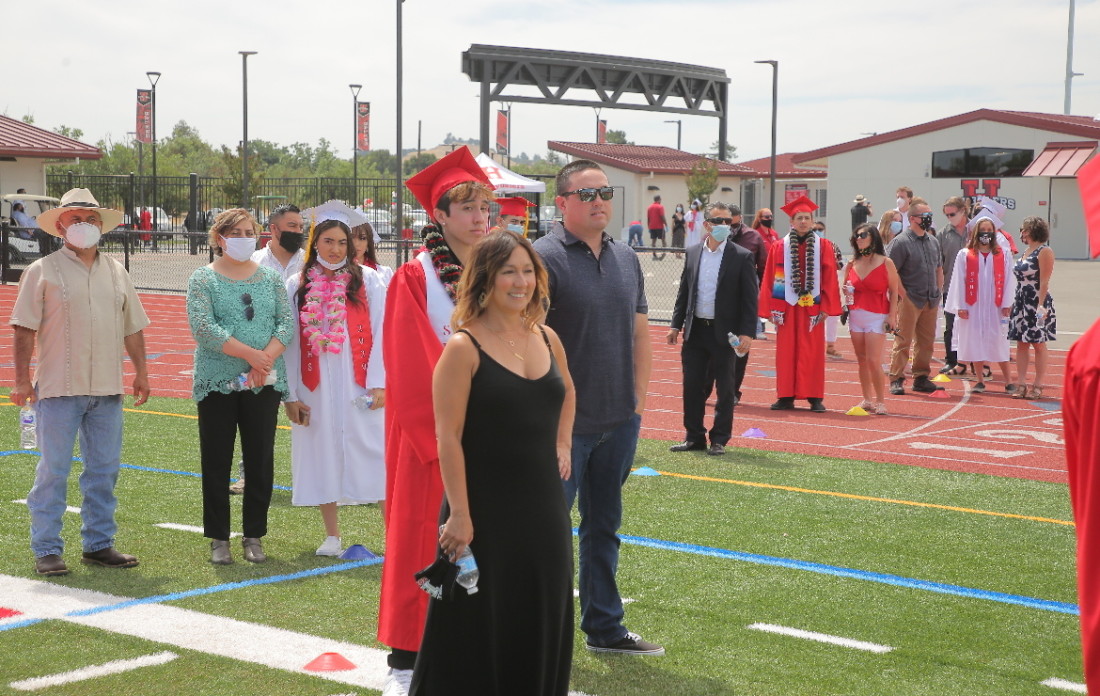 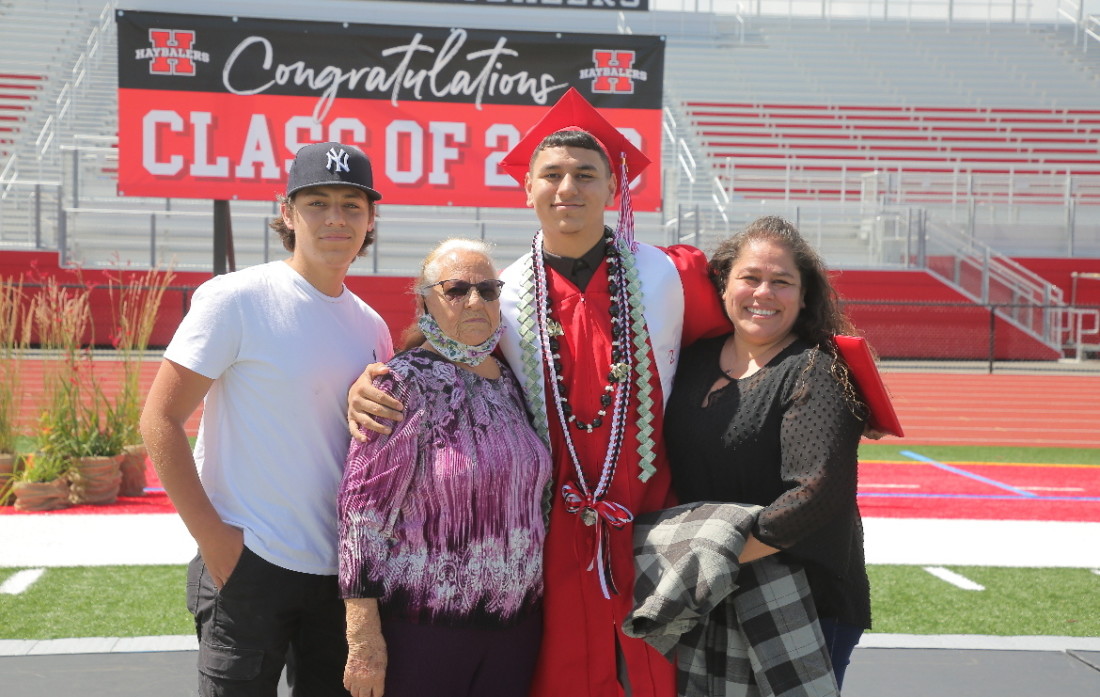 Greg Gonzalez and family at one of San Benito High School's small-group graduations from June 1-4. Photo by Robert Eliason.
×

As the familiar sounds of Sir Edward Elgar’s “Pomp and Circumstance” played over the speakers, graduating seniors followed a path of cones carefully spaced six feet apart, approaching the stage where they would accept their diplomas.

In groups of 60—each accompanied by at most two family members—over 650 San Benito High School students got the chance to hear their names called out, stand on a platform while their honors were read, accept their diplomas, and have their pictures taken in the middle of the school’s football field. The ceremonies took place June 1-4.

It was a far cry from the big graduations of years past, but attendees were happy ceremonies took place at all given the COVID-19 pandemic.

“I feel graduated,” said student Jacob Hardy. “I was very excited that we were going to have this. The day I found out, we were having a little home graduation with the family on Zoom, but it’s great to have a home graduation too.”

Jacob’s mom Amy Hardy agreed. “I think this is awesome. Something is better than nothing. I am very happy with the effort they put forth to honor our seniors.”

Until two weeks ago, SBHS seniors seemed to have no alternative but to participate in a virtual graduation, a slideshow with images of each student with objects of their choice to symbolize their educational journey. The virtual graduation, which involves the entire senior class, will still go ahead as planned.

“A couple weeks ago, something like this was unimaginable,” said Brian DeCarli, who coordinated the small-group graduations. “Our community is really close and we have heard over and over again from the students that they wanted an in-person graduation. It has been great to get these students back on campus one more time.”

DeCarli said that, for the most part, students have been satisfied with the gesture.

“In the past, we have had 6,000-plus people in attendance so this is starkly different,” he said. “But I think everyone understands the reality of it. It has to be different because of all the health concerns you have to stay on top of now.”

Fernanda Rivas was one student excited about the in-person ceremonies.

“I was so disappointed when I thought it was not going to happen, ” Rivas said. “When I found out we were going to have this graduation, I cried.”

The ceremonies took place over four days, with three groups staged every two hours. Each graduation lasted an hour and a half from start to finish. The school allotted enough time so that groups would not overlap, and there was a separate entrance and exit to keep students from crossing paths on the way in and out. Staff provided masks and gloves for those who did not have them, and hand sanitizer was available as people entered the stadium.

The process of getting to the front of the line to receive the diploma and getting pictures taken at three different stations took about five minutes. As a gift, the senior class raised enough money to give each graduate a 4×6 photograph of their choice.

However intimate and brief the graduation ceremony, the students were happy to take part in a rite of passage almost denied to them. There were no hugs or handshakes, but everybody got that final chance to say goodbye to the school they had been attending until the shelter-in-place order went into effect.

Through a special dispensation, student Greg Gonzalez was allowed to bring his grandmother Sophia as an extra guest. Sophia said in Spanish (translated by Greg’s mother Sally) that she missed the big graduation, but that this one was just fine.

For Sally, the moment was bittersweet.

“This is my baby,” she said, “and this is my final one. I suffer for him as a mom, but I am also excited for him.”

There is a double sense of relief for Greg himself.

“I was disappointed when I heard we were not going to have it with all the people and the ceremony,” he said, “but I am also happy we don’t have to sit for two-and-a-half hours in the hot sun!” 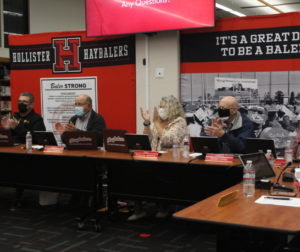 Consultant speaks to board on new Hollister high school. 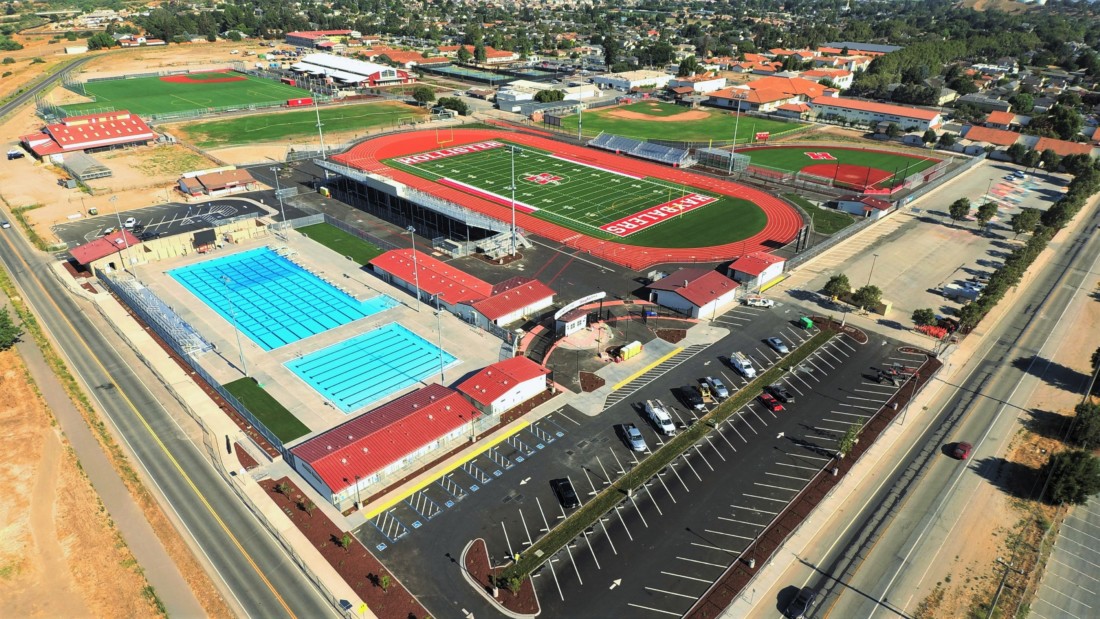 Demolition of classrooms begins in December; new classrooms and solar projects to come. 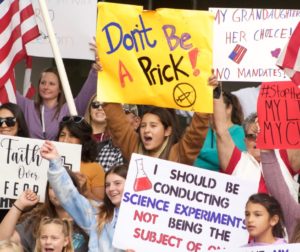