Before serving as pastor for Hollister's First Christian Church, Reverend David W. Havens traveled to Cuba in Jan. of 1959, capturing in black and white the Cuban Revolution 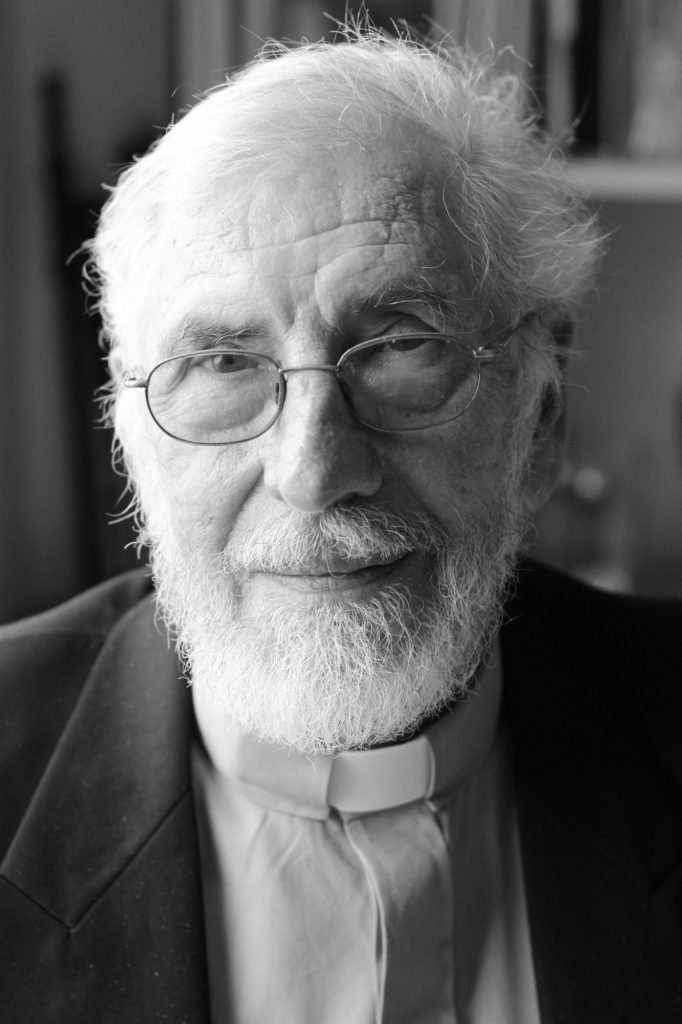 For decades, a collection of 3-by-5-inch black and white photos remained a shoe box—their subjects relegated to an obscurity and a silence that contrasted sharply to the historic events that framed each shot.

In one photo, a dozen disheveled men in Cuban revolutionary garb smile for the camera, two pointing their rifles directly at the photographer. Another photo shows three men holding above their heads a sign bearing an image of a man who soon dominated billboards, the exteriors of buildings, and every square inch of Cuban life. The photos were taken by the former minister of Hollister’s First Christian Church, Reverend David W. Havens, in the first week of January 1959—a time that marked the beginning of Communist rule for the island nation and Fidel Castro’s indelible imprint on geo-politics ever since.

In late December of 1958, Havens, who was then attending the Lexington Theological Seminary in Ky., began questioning his decision to become an ordained minister, a career path that he felt led directly to America’s suburbia. “I had a very limited idea what I’m doing for the rest of my life,” Havens said in a recent interview with BenitoLink.

A self-described agent of change, Havens couldn’t see himself standing in a pulpit wearing a suit and tie and delivering a sermon among those living in cookie-cutter homes. Instead, he preferred the company of those combating injustice, despite the oft-inherent risks involved.

A few years earlier, Havens had showed his support for the fledging civil rights movement by participating in the Blue Grass State’s first sit-ins. Beside African-American students, he endured insults, harassment, and threats. In addition, he drew the ire of seminary staff, many of whom felt that a white collar around Havens’ neck might not fit him.

While visiting Ohio during the seminary’s winter recess, Havens pondered his future. A newspaper headline caught his attention. “Batista Flees Cuba” it read. “This will be the last time I’ll see a revolution,” Havens recalled thinking to himself at the time.

He rushed back to his room and began planning the trip. He decided to pose as a free-lance journalist, despite owning no camera and having no training in photography. Havens overcame his first obstacle by borrowing a roommate’s 35 millimeter camera. Learning the intricacies of photography would be another matter, and perhaps it’s reason why he purchased 28 rolls of film before taking the bus to Miami, where he hopped a plane for Havana.

Havens arrived in the Cuban capital sometime between Jan. 2 and Jan. 4 (he admitted that the exact date from decades ago alludes his 80 year old memory).

His guise worked, too, for he was immediately dispatched with a group of four armed men responsible for maintaining law order in designated areas throughout the city.

For the next several days, Havens accompanied these men in their military-style Jeep, snapping pictures of the euphoria sweeping across Cuba that was ushered in by Castro and his revolutionary army.

Havens’ favorite subjects included the palatial residence where the former president, Fulgencio Batista, once lived but was now stripped bare by those who shouted, “¡Viva Fidel!”, and the barrooms where fights broke out among looters and others who imbibed on revolutionary fervor. Interestingly, Havens never bothered to document the names of these figures during his whirlwind trip.

Running low on money and film, Havens decided that Castro’s triumphant entry into Havana scheduled for Jan. 8 would mark his own departure and the end of his ruse. However before he left, he wanted a few more pictures.

From his hotel balcony, Havens focused his lens on the swelling crowd. Havens then left his perch and walked through the streets, capturing a reporter interviewing Castro’s troops, a crowd of sympathetic Dominicans holding signs in support for their Cuban brothers and sisters, and a boy standing beside a rebel wearing bandoliers laden with bullets.

At one point, Havens placed his roommate’s camera inside of his shirt, afraid it might get stolen. The only images Havens has of Castro’s arrival are those saved to memory, including the conversation the seminarian had with the rebel commander.

Havens explained that he asked Castro if he intended to rule Cuba. Castro emphatically denied such ambitions. “ ‘I am going back into the mountains to raise the finest tobacco in the world,’ ” Havens recalled of Castro’s reply.

Later that evening, Havens returned to the states.

Back at seminary, Havens was eager to tell his story. He first approached the Lexington Herald. The Kentucky newspaper agreed to develop all of Havens’ photos, leaving him with several proof sheets. The paper ran a few photos and paid Havens to write a piece about his experience. An article written in the The Cincinnati Enquirer—the newspaper that spurred his trip—soon followed.

Havens’ journalism career was short-lived. He completed seminary and in 1961 moved with his first wife Suzanne to Hollister, where for two years he was pastor of Hollister’s First Christian Church.

In 1963 he headed to the Central Valley and served with the California Migrant Ministry (CMM). The CMM was an important ally of Cesar Chavez’s National Farm Workers Association (later the United Farm Workers), playing an integral role during la causa—the farmworkers’ cause. Havens became part of the union’s lore when he was the first arrested during 1965 Delano Grape Strike.

He left Delano in 1967 but not before joining Chavez in the historic march to Sacramento—a march partially inspired by the events in Selma, where Havens and the late Dr. Bob Quinn of Hollister joined Dr. Martin Luther King Jr. in crossing the Edmund Pettus Bridge for a final time.

For Havens the road from the Central Valley led to stints as a community organizer in other organizations and agencies, both state-side and abroad, including six years spent in Africa with his wife Lani.

Among the hundreds of images captured by Rev. Havens during his days in Cuba, only 36 have survived. He has no recollection when these photos were developed. But for much of their lives they resided in a shoe box stored on a shelf in the Havens’ laundry room. Unprotected from the elements—including Florida’s humid air—the pictures contorted into a fetal position, distorting the celebratory atmosphere that birthed them.

At some point Havens handed the box to his daughter-in-law, Dr. Ada Ferrer. A professor of History and Latin America and the Caribbean at New York University, Dr. Ferrer explained in an interview with BenitoLink that she was intrigued by the collection and vowed one day to investigate them further, admitting that until recently identifying these figures from decades ago wasn’t on her priority list.

A conversation with Havens late last year changed that.

Following a series about his life published on BenitoLink, Havens felt a sense of urgency to revisit the story behind the monochrome images from his past.

On Havens’ behalf, Dr. Ferrer took the photos to an archivist at the university’s, Tamiment Library and Robert F. Wagner Labor Archives. Tamiment, as it's commonly called, is an “internationally-known center for scholarly research on Labor and the Left,” according to its website.

Methodically and with great care the pictures were unfurled. Later they were digitized.

Of the photos’ significance Dr. Ferrer explained they provide a new perspective.

Unlike the many famous and iconic images of the revolution’s early days, like Che Guevara standing near a tank, Havens’ pictures “are fresh and have never seen before.”

“They’re not of famous individuals. And they include a wider gamut of people, including women,” Dr. Ferrer added.

In March Dr. Ferrer will travel to Cuba and begin the painstaking process of identifying those who captured Havens’ attention nearly 60 yrs. ago.

Havens recently donated his collection to Tamiment. The library's director, Timothy Johnson, wrote in an email to BenitoLink that before the photos become available for research or viewing they will be sent to the institution's "preservation/conservation people to see if any treatment is necessary." (The photos accompanying this piece haven't been put through this process.)

Havens hopes that his photo collection gives scholars and the general public a window into a momentous world event.

“I want to share the exuberance of the revolution,” Havens said. “It was pure excitement and thrill.”

In the wake of normalization between the U.S. and Cuba, Havens wants to return to Havana. But he’s under no illusions, realizing that the socialist paradise promulgated by Castro never took root, as egalitarianism gave way to nepotism and promises of prosperity to economic stagnation.

“Like the U.S., Cuba has a lot of issues with injustice,” he said. “Justice demands exposure of injustice.”