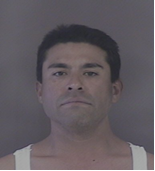 At about 11:20 AM, Hollister Police officers were dispatched to the 1600 block of Valleyview Road regarding a disturbance and violation of restraining order. Callers to NETCOM alerted officers Tlaloc Zuniga has a history of being combative and would possibly attempt to evade police if contacted. In addition, Zuniga had a confirmed warrant for parole violation.

The incident was within a short distance of Sunnyslope School where School Resource Officer Bo Leland was on foot patrol. Police activity in close proximity to a school can be disruptive. A person on the run from police can lead to a school being locked down. SRO Leland responded from the school and was the first officer on scene. SRO Leland’s quick response took Zuniga by surprise and he was arrested with no further incident.

The rapid response is the result of the partnership with the Hollister School District and the City of Hollister in which both share the cost of providing a new School Resource Officer. This allowed the Hollister Police Department to have one additional officer on duty and at the time of the incident.

If anyone has information related to this investigation you can contact the Hollister Police Department at 831-636-4330. Persons wishing to remain anonymous may call WeTip at (800) 78-CRIME. Information provided to WeTip may qualify for a reward.