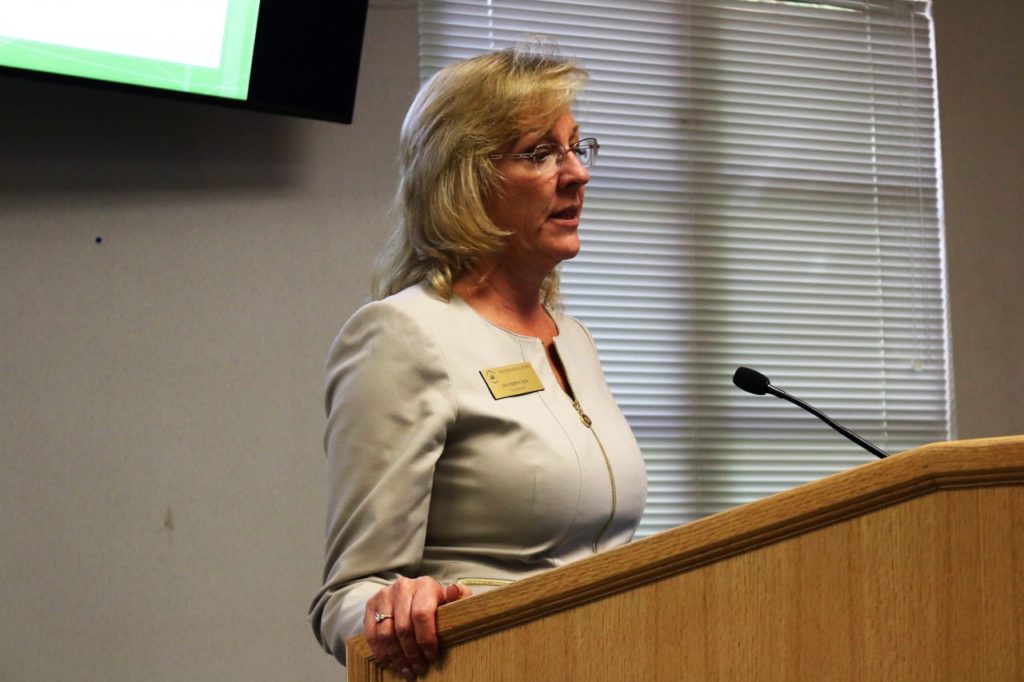 Lisa Andrew wondered if developers wanted deadline to run out in order to build homes on school site. Photos by John Chadwell What began as a “high-level overview” during the Sept. 26 board of supervisors’ meeting concerning the Santana Ranch development agreement evolved into a heated discussion of government incompetence, threats, and broken promises regarding an elementary school that voters have already funded to the tune of $36 million through school bond Measure V.

Barbara Thompson, county counsel, began by telling the board that two parks and affordable housing units within the development would not be triggered until predetermined numbers—300 units for the first park, 1022 units for the second park, and 500 for affordable housing—of homes were completed. The development is currently restricted to 145 units until the traffic lights at Sunnyslope and Valley View Roads have been activated.

Thompson went on to say the development agreement stated that if the property owners and the Hollister School District do not execute a written sales agreement for the 12-acre parcel adjacent to Fairview Road by Dec. 31, 2020, Anderson Homes could potentially build more homes on the site, rather than a school. The school district and Anderson Homes are currently in negotiations to finalize the purchase of the site for the new school, for less than full market value.

Supervisor Jerry Muenzer complained about the work at intersection of Sunnyslope and Fairview as one of the worst efforts by a developer he has ever seen, and then went on to list several substandard aspects of the installation. He wondered if the county did not have staff members overseeing it because it was “a terrible job.”

“What I’m hearing is the negotiations between the developers and the school district is going nowhere, and the developers are trying to hold out until 2020 until the agreement goes away,” he continued, and then leveled a not-so-veiled threat. “I want to be on record, if that happens and the acreage that’s supposed to be set aside for a school will be nothing but open space, to be maintained by the CFD.”

“We currently have a slope that’s great for ski jumping or skateboarding that will have to be tiered, dirt will have to be brought in, and grading will have to be done,” she said. “We were working with the developer to try to mitigate that because we’re supposed to get a buildable piece of land, only to be told behind closed doors that after many months that, ‘I’m sorry, we’re not going to be able to help you with that. This is going to be an additional, big cost to you.’ Their credibility and their word is hard to trust, at this point.”

She said the district is dedicated to putting a school on the site that taxpayers had passed a bond to pay for. She added that the school district and the developer each brought in appraisers to determine the value of the land and the figures were poles apart. The district has been told, according to Andrew, that it must accrue the costs associated with preparing the site for a school, then she pointed out in the development agreement that, in fact, the developer is responsible for those costs.

“We’re now being told we’re responsible for part of that,” she said. “In this plan we have interpreted that we should pay less than full-market value for a barren piece of sloped land so we can build a school, and the developer is responsible for constructing the utilities, the road infrastructure, and that we should not be bearing those costs.”

She described the situation as “disheartening,” and commented that people have bought homes in Santana Ranch with the expectation of having a school that their children could walk to. She said the district will negotiate as long as possible.

“We asked (the developer) if you are waiting us out in order to put something else there, and of course they have to have a Plan A, B, C or D,” she said. “I don’t know if they have to come back to you for approval of that; if they were going to put more homes there or expand the lots of existing homes or put retail there.”

Brian Curtis, of Stonecreek Properties, the local developer working with Anderson Homes, said when the first phase of Santana Ranch began in 2014, they built out the intersection at Sunnyslope and Fairview Roads. At that time, he said, the school district spelled out what it wanted regarding utilities and water laterals on the site, which were installed.

“We designed that site for a school since day one,” he said. “There may be a misunderstanding, but all of the services for a school do exist.”

Supervisor Medina stated that he read the entire development agreement and that he couldn’t find any wording concerning sharing costs of developing the site or about fair-market value. He said, as he understood the wording of the agreement, if the site was not developed as a school, the developer could then expand the size of existing lots to cover the 12 acres. He told Thompson if that was not clear in the agreement it needed to be addressed as soon as possible. He also asked if the same site was once considered for a retail development. Thompson said there is a plan for a possible commercial development at Santana Ranch, but not on the same site as the proposed school. She said she was not aware of a specific trigger for it and that while not required to add a commercial development the developers are allowed to do so. Medina said if there is no sales agreement by 2020, the board should know now rather than in the future what could be built on the site.

Supervisor Botelho said he sees no other alternative to a school for the site and that he was surprised to hear negotiations were not going well.

“Now, they want an arm and a leg for the school site,” he said. “Situations like this continue to demonize developers. Usually, we trying to blame out-of-town developers, but these are in-town developers.”

He explained that he had been following the Santana Ranch development for years, since his time on the Planning Commission. He said he thought it would be a beautiful community and believes it still could be.

“We’ve got to get our act together and do what we’re supposed to be doing,” he said. “I’m going to do everything I can as one board member to support Supervisors Muenzer and Medina with their concerns, and now I’m concerned where we’re going with this, to work with the schools and come up with a reasonable number so the school can go forward with its project.”

De La Cruz concurred with the other supervisors in that there needs to be a school—or something of equal value—on the site. He said he would not support any changes to the site that the developer might propose in the future.

“If they require board approval, they ain’t going to get my support on it,” he promised.

Medina stressed that as long as he is on the board there will be no more than the original 1092 units as spelled out in the development agreement. During public comments Marty Richman, long a proponent for better development agreements, berated the Planning Department.

He said both Hollister and the county don’t ask for enough from developers in their development agreements. He said other communities ask for the world in their agreements and get it.

He challenged the supervisors by asking them when they were going to add enough professional staff to the Resource Development Agency and the Planning Department in order to assure what they approve today isn’t being debated 15 years down the road.

Elia Salinas accused the developer of “strong-arming” the school district. She resented the fact that the district had found it necessary to spend $500,000 on the project. She also said any fair-market value price should be based on grazing land prices rather than residential because that is what the developer most likely paid.

Da La Cruz said since the discussion was a presentation that there was no other action to take other than to monitor ongoing negotiations. Before adjourning, Medina wanted everyone to know that no matter what, there would be a park in the development.