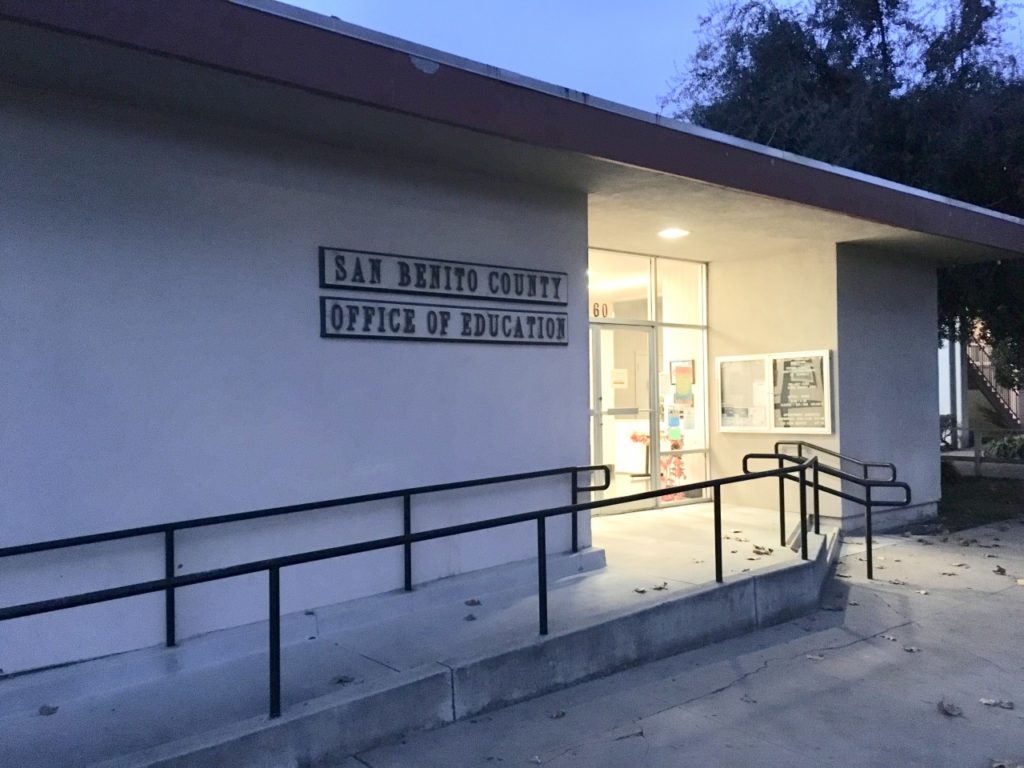 BL SPECIAL REPORT:  A budget shortfall of more than $1 million has crippled decision making in San Benito County’s three largest school districts, stymied teacher raises and angered educators and elected officials who say the problem might be worse than anyone knows.

While it may have started years before, the shortfall has been traced back to 2012. That’s when officials say accounting oversights in the San Benito County Auditor’s office allowed hundreds of thousands of dollars of spent money to stay on the books as available cash for everything from supplies to salaries for the Hollister, San Benito High School and Aromas-San Juan Unified school districts.

This masked true account balances and led school trustees and superintendents to believe there was more money in their bank accounts than they actually had.

Since the problem was discovered in the last year or so, it has been next to impossible to make informed spending decisions, school officials say.

To this day, the correct balances are unknown, as a nearly year-long county probe to determine the exact figures has languished with no end in sight.

The situation, officials say, is akin to a bank erroneously posting a customer’s checking account balance as $100,000 when it’s actually $80,000, then demanding the $20,000 back after the unsuspecting customer spends the money.

But it gets worse, officials say.

In some cases, districts were told by the county that money owed had been deducted from their accounts, as in the banking example, while their district financial experts were telling school leaders the money had not been deducted.

That is the case at HSD, according to school board trustee Robert Bernosky. His district has now been told it owes more than $1.14 million to the county because of the accounting errors.

Elected in 2016, Bernosky has spent a career as a corporate financial expert examining the books of troubled companies to figure out what went wrong.

He got wind of problems with HSD bookkeeping shortly after he was elected, did some digging and recently said what has gone on was “unacceptable” and “bizarre” and must stop.

“Hundreds of millions of dollars needs to be accounted for and we don’t have the firepower to do that in the county,” he said, citing a chronic lack of resources at the county level.

“Teachers did not get a raise this year because of the uncertainty over our opening balance,” he said, calling it “embarrassing.”

“The board is unified, we are saying ‘no more’; we don’t want shoddy government practices going forward, so we are taking aggressive stances when dealing with these things to make sure any wrongs that have happened are corrected and we don’t make any wrongs going forward.”

How? By being “better watchdogs” of their own finances, he said. One example: HSD recently began collecting its own developer fees, which builders are required to pay for school needs triggered by new housing. It used to be collected by the county and put into district accounts, Bernosky said—until that system ran into problems.

But however much oversight might be needed, it’s not a welcome activity when done by board members, Bernosky said.

Historically, elected trustees called the shots in school districts, but that model has been reversed, he said, pointing to another systemic problem that in his view needs to be addressed.

Nowadays, superintendents call the shots and don’t want, nor does the law in some cases allow, trustees to ask too many questions, according to Bernosky.

“School boards have been trained not to look into the details of their operations,” he said.

It’s that climate which led in part to the current problem—board members who are not financial experts are pressured to trust what the experts tell them, he said.

When Bernosky began looking at district accounts, he said he saw problems right away, problems that trustees lacking his expertise would not readily recognize.

Andrade’s office serves as banker to the county’s 11 school districts, guarding and investing their funds.

Another issue Bernosky sees contributing to the financial discrepancies now plaguing districts is the number of agencies involved in and responsible for the schools’ finances.

They include not only the county auditor and treasurer, the county office of education and 11 districts, but the Santa Clara County Office of Education, which contracts to issue San Benito County’s school checks.

Andrade was on vacation and did not respond to emailed questions about school finances and her office’s role as gatekeeper of district funds.

SBHSD superintendent Shawn Tennenbaum said they are aware of the problem and are looking for a solution, but he has no idea where the amount comes from and has received nothing official from Gonzalez about what’s owed.

He lamented the resources wasted looking into the financial mess.

“When time and energy is spent elsewhere it takes away from the primary purpose of an educational system . . . [it] should be devoted to our students,” Tennenbaum said.

In the meantime, until credible figures are determined, superintendents and trustees in the districts, who spend a combined total of about $122 million a year, say they don’t know whom to believe or how much money is in coffers to operate schools, pay employees and educate children.

On the record, officials bemoan mistakes or oversights made by those charged with looking out for their accounts—Gonzalez, Andrade and San Benito County Superintendent of Schools Krystal Lomanto—or they express anger and frustration that it’s taking so long to get answers.

But in background discussions with more than a half dozen officials involved at one level or another, some hint at other, perhaps more unsettling, concerns.

They wonder if, for example, laws were broken, and whether now retired officials under whose watch it happened knew what was going on.

And they wonder if county or district accounting practices are outdated; whether people in positions of responsibility are incompetent; and whether state investigators should be brought in.

“When it has taken this long and the [dollar] number changes over and over, people’s minds and thoughts can go many different directions,” said Lisa Andrew, HSD superintendent. Andrew oversees the largest public agency budget in the county, about $55 million.

She acknowledged anger and frustration and a lack of confidence in county officials. She has seen too many promised deadlines for answers come and go, and too many changes in the amount HSD supposedly owes, she said.

“My job is to ensure fiscal solvency of this district, to ensure monies are used properly. I can’t do that when I don’t know my account balance,” she said.

At the Aromas-San Juan Unified School District, Superintendent Michele Huntoon said more than $210,000 has been set aside in anticipation of the county reclaiming funds.

Asked if the situation has been frustrating, she said, “Absolutely. Patience is waning, nonetheless there is work to be done and we know people are doing the best they can.”

Noting that smaller counties have fewer resources to deal with such issues, Huntoon added, “This is an opportunity to review current processes and procedures and make adjustments so this does not happen again.”

To that end, Gonzalez has set in motion what’s hoped will be a thorough scouring of financial records that will set things right once and for all.

The county on Feb. 7 entered into a $69,000 contract with a private firm, Parc Corp LLC of Pleasanton, to review and reconcile thousands of checks written to and by the school districts and posted in clearing accounts during 13 years of business, from 2003 through the 2015-2016 school year.

The project was to be completed by June 30 and was estimated to take 853 hours billed at a pre-discounted rate of $120 per hour, or $102,360. However, Parc offered a reduced government rate and another discount for a flat fee payment, which when combined knocked 35 percent off the original price tag.

It was not enough time. So the contract end date was extended without additional cost, Gonzalez said. It’s now hoped the project will be completed by year’s end.

He said responsibility for what he called the “omissions” and “clerical oversights” that caused all the problems lies with his office, but he dismissed the notion that what Parc is doing is an audit.

“It’s a regrettable error that occurred,” he said of the whole matter. “And nobody of course is happy with this. Nobody intended this to happen.”

Gonzalez said the loss of four accountants during the Great Recession contributed directly to the problem.

“I warned the board of supervisors when the cuts were made, I told them mistakes are going to happen . . . this is the natural consequence.”

Another part of the financial system that Gonzalez called “clumsy” is the fact that the county office of education and the county treasurer’s office have separate accounting systems.

In response to the account discrepancies, recent improvements in accounting practices and software have been put in place and are on going to make sure the problem does not recur, according to Gonzalez and Lomanto.

And while Gonzalez calls the Parc project a review and reconciliation of checks, Bernosky sees it differently.

He called the project a “deep dive, forensic audit,” invoking a legal term for the use of scientific methods to determine if a crime was committed.

“It’s a nuance without a distinction,” he said of his and Gonzalez’s differing views of Parc’s mission.

The terminology of Parc’s proposal letter from company COO Nimrat Johal to Gonzalez does not use the words forensic or audit. She refers to the project as a “cash reconciliations of the schools clearing accounts under the umbrella of the San Benito County Superintendent of Schools.”

Under the suspect accounting system now being scrutinized, districts rely on San Benito County Office of Education numbers to be accurate when it reconciles account balances with warrants, checks and ledger journals where everything is recorded and double checked by the auditor’s office before being officially registered in the districts’ accounts.

Checks for vehicle purchases, for example, must be posted to the right account, while paper trails of such transactions kept by the SBCOE and “data dumps,” the records of the Santa Clara County Office of Education, must be reconciled, or matched, before final numbers and balances are posted to each district’s account to be relied upon by trustees, superintendents and financial officers.

“As superintendent of schools I have the responsibility for fiscal oversight of each school district within San Benito County,” Lomanto, who took her position in 2015, acknowledged in an email to BenitoLink.

Asked to respond to the suggestion by Bernosky that her office was to blame for the problems, she said, “My door is open to any school board member desiring to discuss this matter.”

He said the root of the problem was a breakdown in the reconciliation process, it just was not done professionally, he said.

“The fact that we outsource our accounting to the county is not important. Hollister School District needs to be responsible for its own numbers, end of story,” Bernosky said. “If we had been, we would not be in this position right now.”

BL Special Reports are long-form articles. BenitoLink team members put extra time and effort into researching and investigating important issues for the benefit of the community. BL Special Reports are funded by individual donations made by San Benito county community members or friends of San Benito county who value high quality journalism. Help support more projects like these by Donating to BenitoLink, giving one time or by making monthly payments that fit your budget. Your support keeps these stories coming.