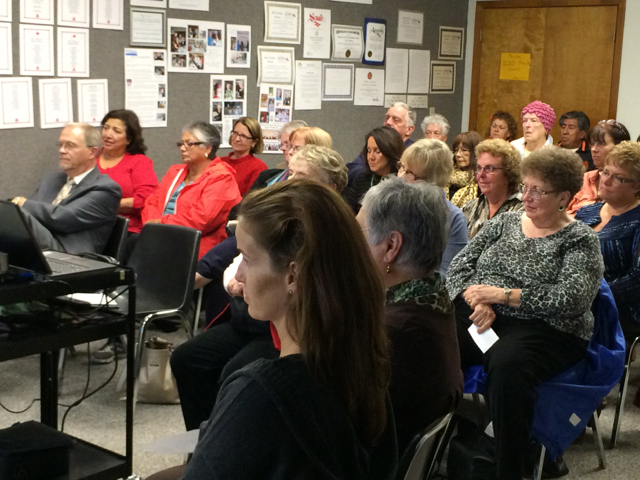 The evening was moderated by Community Leader Dave Wright. The panelists were Kathy Alameda, a mom, and member of the Agricultural community, Judge Steve Sanders, Chair of the Board of Supervisors Anthony Botelho, and Marty Richman, columnist for the Hollister Freelance and former mayoral candidate.

All of the panelists spoke in support of the importance of the Library in the community, but acknowledged that the county has cut it’s staffs to the bone and there is nothing left to be cut which is not important. The economic situation may be slowly improving, but the local governmental budgets are not likely to significantly improve in the near term. There is a real possibility of further budget cuts.

The difficult economic environment was acknowledged by the panelists and the understanding that if anything further is cut from the County’s budget, it will be painful. There are currently 2 Sheriff Deputy’s patrolling the county. The County is having to make difficult choices between Safety and other needs.

There was a common current of feeling that this may be an opportunity to think outside of the box and create something unique. They all expressed their belief that the Library should be a main hub in the community. It was also clear that it is necessary to have a plan, rather than simply seeking funding.

Marty Richman presented his opinion that the solution to the Library’s situation needs to be in three stages. First, it must survive and maintain itself, second, it must stabilize it’s position and then, once that has been accomplished, it can move to the third stage of expanding.

Judge Sanders spoke of his program to have offenders read to their children at the library to prevent the cycle of illiteracy. He reported his realization that increasing literacy decreases crime. He reported that 60-75% of of inmates in prisons are illiterate. He believes that putting resources into the long term problem makes more sense and that Libraries and literacy programs are part of that solution.

Kathy Alameda presented her belief that this situation requires thinking out of box. She said perhaps there needs to be food that appeals to the youth, a fast food presence, she noted that there are many organizations in search of a good, safe place to meet, Why not partner with them? She said that due to the economic realities, government was not going to be able to help, so other solutions must be found.

Board Chair Botelho noted that the issue of the Library should be on every agenda of the Intergovernmental Committee. He also said that he and Supervisor Muenzer were supporting a stand alone impact fee in support of the Library, or that perhaps a Library Special District might be established.

There was discussion of the benefits to the City of Hollister of having County facilities like the new Courthouse and the library, in the center of the city and that they may be a source of funding support. Chair Botelho shared that Mayor Velazquez has been supportive.

There was also discussion about the role of the Agricultural Community in supporting a new library and it was noted that they are but one portion of the community which needs to support the project.

There was discussion of the importance of partnerships and co-location. It was noted that other libraries have combined with elementary schools, high schools and universities, San Jose State University being one.

It was shared by all of the panelists that all segments of the community must participate in the creation of the plan, that they must feel ownership of it. As yet there is no clear vision of what the library should be and that still needs to be created. The community needs to understand and share the belief that the Library is valuable to the community.

Community Foundation Gary Byrne wrapped up the evening noting that it is the task of those who support the Library to learn it’s story of it’s importance and tell it to the community.