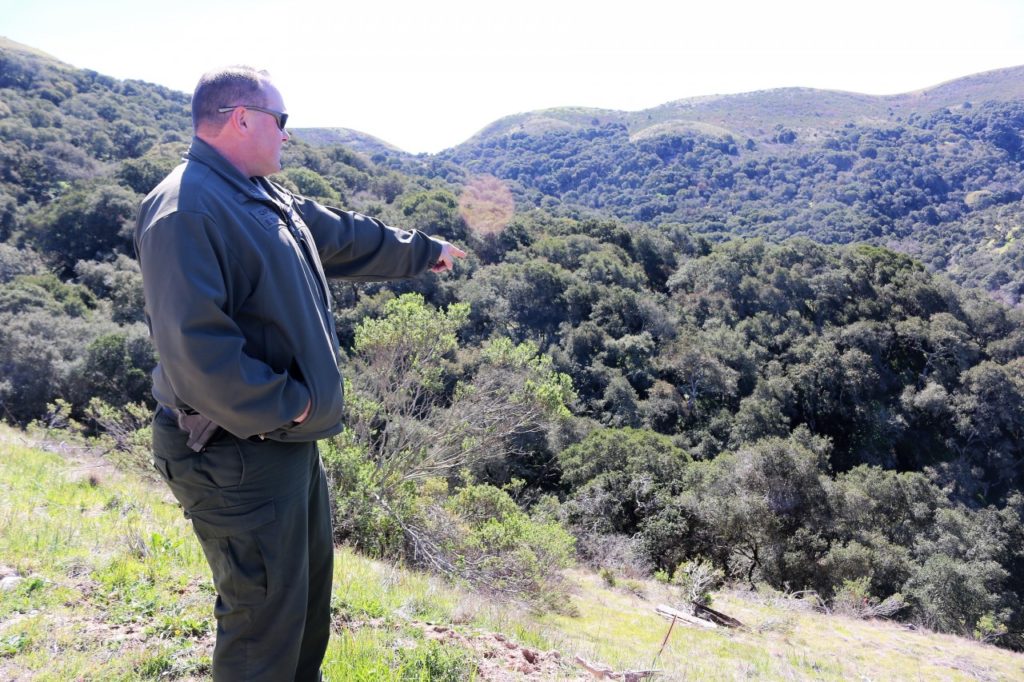 Capt. Eric Taylor said law enforcement personnel had to use ropes to get down to where the body was buried. Photo by John Chadwell After hearing testimony from sisters Catharina and Serena Ji, about their relationship with their murdered mother, Yoon Hee Ji, San Benito County Superior Court Judge Harry J. Tobias found in favor of the Ji sisters, who are 19 and 22, respectively, awarding each $20 million during an ex parte or emergency judgment.

BenitoLink obtained the transcript from the civil hearing, a prelude to the criminal trial of the sisters’ father, Sang Lim Ji, 49, and his alleged accomplice, Jung Choi, 45. They are each being held on a $2 million bond and accused of killing Yoon Ji, also known as “Clara.” The transcript tells of the sisters’ relationships with their mother and how they miss her.

Catherina, sitting in the courtroom, and Serena, participating by phone conference call, listened as Capt. Eric Taylor of the San Benito County Sheriff’s Department told in graphic detail how their mother was murdered with a baseball bat. His testimony, along with the sisters’, would be used by Judge Tobias not only to determine the possible culpability of Sang Ji and Choi in the killing, but also the amount of damages.

The urgency in conducting the civil case before the criminal trial, which is not normally done, is because Choi is a South Korean national and Tobias’ judgment would have to be converted into a Korean-enforceable judgment. There was also the matter of a third party being involved in what could be an international conspiracy to commit murder and the funneling of hundreds of thousands of dollars out of the country.

“The concern that we have is that there was a wrongful transfer of about $200,000 from the community assets to Ms. Choi’s side of the family [Capt. Taylor told BenitoLink March 8 that Ji claimed he and Choi were cousins],” said San Jose attorney James C. Hann, who represented the Ji sisters in the civil case. “There was about $100,000 transferred to Bong Kee Choi [Jung Choi’s brother], who is the other named defendant, as well as about $30,000 to the mother of Ms. Choi.”

Hann told the judge of the urgency of the disposition of the community assets and said the whereabouts of the brother, Bong Kee Choi, were unknown.

“We have contacted the Korean council [and] we are in the process of locating him,” Hann said. “But they are advising me that the Korean courts will require a judgment against these two named default defendants before they can proceed in locating and serving Mr. Choi in Korea.”

Judge Tobias directed Hann to question Capt. Taylor concerning events on Nov. 28, the night of the murder. Taylor said that initially the case was investigated as a missing person case of a suspicious nature. He said he first met Sang Ji and Jung Choi at the Sheriff’s Office when they came in to complain that the department had looked at their cell phones as part of its investigation. Once Taylor had determined that a homicide had most likely occurred, he authored a search warrant for the Ji residence at Monte Cristo Court in Hollister.

Hann asked Taylor the cause of death and he responded it was blunt force trauma to the head and it was a homicide.

Taylor said, “Mr. Ji told me he was present when Mrs. Ji was killed and that she was killed by his cousin, Ms. Choi. He told me that Ms. Choi retrieved a youth baseball or softball bat from the garage and attacked Mrs. Ji from behind and then straddled her and struck her approximately 20 to 30 times with the bat.”

Taylor said that after conferring with the medical examiner’s office, it was determined that just one person could not have committed the murder.

“It was at least two participants based on the injuries,” Taylor said.

Taylor said Sang Ji told him that after the killing he and Choi placed the body in a suitcase and took it to a storage shed in the backyard and left it there overnight. The next day, they transported the body into the hills along San Juan-Salinas Grade Road where they buried it in a shallow grave.

Taylor told Judge Tobias the weapon was not recovered, but Ji had described it in detail.

In questioning Choi, Taylor said she claimed to have no knowledge of what happened to Yoon Ji and that she had not seen her since she arrived at the Ji residence on Nov. 28. Taylor said Choi admitted touching the bat once while she was cleaning cobwebs inside the house. Choi also told Taylor that a number of items had been burned in the backyard.

On March 7, Taylor told BenitoLink during an interview (see video below) at the crime scene along San Juan-Salinas Grade Road that the bat was most likely aluminum, so it could not have been burned, but it has not yet been found. He also said the suitcase was mostly likely burned in the backyard.

Despite Choi’s statement to Taylor that she had not seen Yoon Ji since arriving at the home, Taylor said that self-defense had been mentioned by Sang Ji and Jung Choi. Taylor was asked by Hann if that were a possibility. Taylor said, in his opinion that was not possible.

In a direct contradiction to Choi’s claim of not having seen Yoon Ji, Taylor said Sang Ji told him that his wife was suspicious that he and Choi were having a sexual relationship and that she was upset, had confronted both of them, and was threatening to leave him. One of the Ji sisters testified that she was trying to help her mother find a divorce lawyer months before.

“He also told me that without Mrs. Ji’s knowledge, he had transferred money to Korea . . . and she was upset about that,” Taylor said. “And he [Ji] did say that the night that Mrs. Ji was killed that she was facing away from Ms. Choi. She had no idea that Ms. Choi was coming up behind her and she was attacked from behind.”

Judge Tobias asked Taylor if Choi or Sang Ji had suffered any injuries that would support their apparent claim of self-defense against Yoon Ji. Taylor said neither had any defensive injuries. Taylor also told the judge that when he and a sergeant from the Sheriff's Department came to the residence to serve the search warrant they discovered Choi cleaning the kitchen floor where blood was discovered.

“She actually still had the bleach bottle and a bleached rag in her hand and was scrubbing the floor where we know the homicide occurred,” he said.

After hearing Taylor’s testimony, Tobias found “good cause and factual basis to believe that the death of the victim, Yoon Hee Ji, was caused by the named defendants who are the subject of this default hearing, Jung Choi and Sang Lim Ji.”

On March 7, when Capt. Taylor escorted BenitoLink to the two crime scenes along San Juan-Salinas Grade Road, he explained how, through Sang Ji’s statement, investigators first found one location where a piece of bloody carpet had been thrown on a trash pile already there. Then, about 100 yards up the road, he showed where the body was taken down a steep hillside, most likely in the suitcase, to a grove of trees where it was buried in a shallow grave. Using search dogs, authorities discovered the body three weeks later.

Civil cases usually involve private disputes between persons or organizations, while criminal cases involve an action that is considered to be harmful to society as a whole. On March 1, Hann told BenitoLink that while it is not normal for a civil case to precede a criminal trial, it does happen from time to time.

“Obviously, we would not do anything to jeopardize the criminal proceedings,” he said. “We wouldn’t put any information out there that the defense attorneys or district attorney wouldn’t already have. In the civil matter, we can make whatever allegations that are supported by the evidence, whether it’s true or not. Whether a jury finds it credible is a whole different story.”

Neither Sang Ji nor Choi were present during the civil case and Judge Tobias found each was responsible for a judgment of $20 million to each daughter, or a total of $40 million. There were no punitive damages because of legal considerations in South Korea.

Sang Ji and Choi are scheduled to return to court March 23. Sang Ji’s attorney, Gregory LaForge, told BenitoLink, “There’s no way in hell I’d let my client testify [in the civil case], but this is really good for us in a way.”

LaForge went on to tell BenitoLink that Sang Ji was worried about his daughters’ future and signed some real estate papers, which he assumed turned the home over to them. There is currently a “For Sale" sign in front of the Ji family home.

Judge Tobias was looking at some photographs of the Ji sisters with their mother when he asked Catharina how old she was in the pictures. She said she thought she was 9. Tobias appeared to be moved by the sisters’ recollections of their mother and how much they will miss her.

“It looks like a great relationship and I hope that you can look at these photographs with your sister and remember all the good things that your mom did for you,” Tobias told her. “You are going to miss her. You will be wanting to remember advice she gave you in situations and family discussions that contain information only she knows, and I know from losing parents that that is always hard, so good luck.”

Pair arrested on suspicion of murder and conspiracy to commit murder