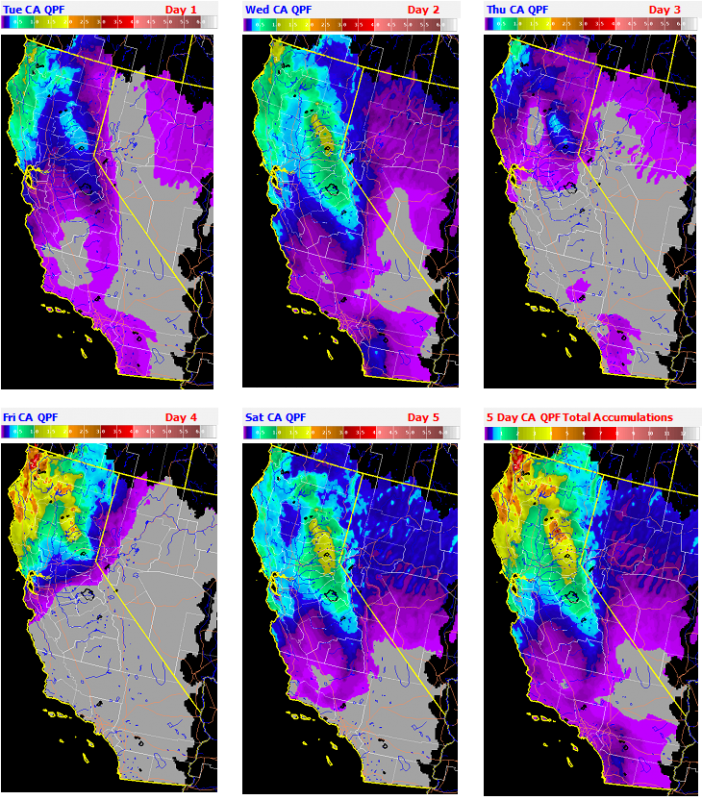 After another balmy day on Tuesday over CENCAL, big changes are underway as an upper level storm system will bring much cooler temps, dropping by as much as -15° to -20° as compared to temps on Mon/Tue.  Showers and chances of thunderstorms cover the region on Wednesday, with a gradual drying out period on Thursday.  Another storm will bring additional rainfall into NOR/CENCAL this weekend.  The frontal system which passed thru CA Tuesday brought rainfall and some thunderstorms to NORCAL and some light showers to portions of CENCAL down to Modesto.  The upper level vort disturbance will bring rains further south on Wednesday with Thunderstorms producing a threat of small hail.  The weekend storm contains a subtropical fetch of moisture which has the potential to bring periods of heavy rains into the Northern Sierra on Saturday with significant rains of 4 to 5 inches into the Shasta and Feather River basins, where the much needed precip is a welcomed sight.   Another storm appears on the horizon possibly for early next week which shows the potential to produce strong Thunderstorms in the SJV.

WINTER STORM WARNING; posted for the Northern Sierra from Wed thru Thu morning for periods of heavy snowfall of up to 8-17 inches above 5.5K accompanied by strong winds of 45mph or higher.  This will impact the Sierra from Lassen southward to Donner (I-80), Echo (Hwy 50) and Carson passes.

Winter Wx Advisory; for snowfall of up to 6 to 12 inches for the Southern Sierra from YNP into the Kings River basin above 6K, accompanied with gusty winds up to 45mph

Special Notation;  The GFS has flipped into an active mode for the next 8 Day period, especially with regards to NORCAL, with impressively high 5-7 inch QPF’s suggested during the period into the North Coastal region. More importantly QPF’s of up to 4-5 inches are forecast for 2 of the most important river basins in the State, the Feather and Shasta.  A Jet Stream of 95kts noses into the Northern SJV by early Wednesday, with increasing chances of precip in addition to producing chances of Thunderstorms for the interior Great Valley down to Kings and Tulare Co.  Good shear profiles and unstable air will make for an interesting day, Wednesday with the best convective parameters favoring the North Valley.   Wednesday QPF’s for the SJV range from 0.5 inch in the northern portions diminishing to 0.1 to 0.2 inch for the South Valley.  Localized heavy rain/hail are possible in areas which develop Thunderstorms.  Behind this system the general flow pattern remains zonal with light precip continuing into portions of NORCAL north of the I-80 corridor.  The next storm appears much wetter, with a generous subtropical tap of moisture showing PWAT values up to 1.2 inches into the prefrontal warm sector producing heavy rains into NORCAL on Saturday.  The latest 0Z GFS forecast model shows a Jet streak slides into NORCAL under the SW flow aloft with warm air advection and isentropic lift, models suggest heavy rainfall rates of up to 0.35 inches/hr for at least a 6 hr period (early Saturday), with total accumulations of up to 4 inches during the 24hr period reaching into the Feather River basin Saturday.  There is good model agreement for this significant precip event for NORCAL. Another shortwave moves across NORCAL on Sunday with widespread rains and snow.  After a brief break into Monday, another storm reaches into CA on Monday.  Currently this storm appears to have the potential to produce strong post-frontal Thunderstorms into the CENCAL/SJV region, therefore this event should be monitored closely.  The extended models are in good agreement with these storm systems bringing a significant amt of precip into at least the NORCAL watersheds.

Wed, Mar 26th             A quasi-zonal flow pattern behind the early morning passage of the trough axis continues a moist onshore flow into NORCAL with continued heavy rains over portions of NORCAL and with diminishing amts over CENCAL.  Charts indicate possible Thunderstorms over NOR/CENCAL down to Kings/Tulare Co during the afternoon with the NAM showing partial clearing during the afternoon which could increase instability and produce Thunderstorms.  Skies over CENCAL clear in the evening as weak High Pressure moves onshore overnight, however a moist flow continues to bring occasional rainshowers into NORCAL.  A secondary cold trough digs southward from the GOA overnight with another cold front developing west of OR.

Sat, Mar 29th               The remnants of the stalled cold front continue to bring heavy rainfall into a line from SFO into the Tahoe region along a narrowing band of precip.  Although the frontal boundary is narrow it does contain a short-fetched Atmospheric River (AR) attachment which originated near the Hawaiian Island region, but has been severed.  The far NW portion of CA begins to clear, while clouds increase over CENCAL and fair skies prevail over SOCAL.  The broad trough axis remains stationary off the West Coast with a strong cyclonic SW flow aloft over CA, which should produce excellent orographic lift for the Sierra.  The 0Z GFS shows the front rapidly dying out over CENCAL, but with good lift producing a short burst of mod/heavy precip for the Southern Sierra.  Overnight as weak flat ridging moves over CA, another shortwave trough drops out of the GOA along 140W and heads east.

Sun, Mar 30th               As the flat High Pressure ridge kicks east into the Great Basin the new -30°C trough axis moves closer to the coast, and a strong cold front develops west of the CA/OR border.  Overnight the trough pivots, with the alignment of the frontal boundary extending north to south moving very close to the NORCAL shoreline.

Mon, Mar 31st              Forecast charts show a strong frontal passage thru CA early in the day with the -30°C cold core storm center near the CA/OR border and strong vort dynamics over the Tehachapi Mts.  This would place the SJV into the left front quadrant of the Low Pressure, an optimum position for classic Thunderstorm development.  Even though this event is out there on Day 6, if these charts do verify, then strong Thunderstorms, possiblySEVERE could be expected within the SJV.  This should be closely monitored.   Overnight a minor disturbance moves onshore near SFO which keeps showers going over most of NOR/CENCAL, although the forecast confidence in this minor disturbance is low.  Further offshore High Pressure is rebuilding at 140W with a NW flow pattern nearing the CA coast as the backside of the trough shifts east.

Tue, Apr 1st                  High Pressure noses into NORCAL as skies continue to clear out over CENCAL, under a NNW flow pattern.  Overnight as High Pressure continues to push NE across CA, another large storm system develops into the GOA with its leading cold front rapidly approaching the PACNW. This system contains a long-fetch Atmospheric River (AR) attachment following the leading cold front.  This moisture source stretches back into the WPAC into the Maritime Continent.

Thu, Apr 3rd shows little change in the overall synoptic flow pattern with High Pressure over CA and Low Pressure remaining stationary in the GOA with the storm track bringing rains into the PACNW and BC, Canada, while CA remains fair/dry.

Fri, Apr 4th shows the GOA trough digs further south, while High Pressure remains stationary over CA and the Great Basin.  This produces a tightening of the pressure gradient over the EPAC with increasing storm activity and heavy rains reaching into BC, Canada and WA State.

Sat, Apr 5th shows High Pressure over the West Coast migrates eastward into the Great Basin as the very large and deep long-wave trough passes east of 140W.  The flow aloft over CA veers to the south as the trough approaches, which could increase temps.

Sun, Apr 6th shows the High Pressure over the Great Basin is stubborn to move, which rapidly diminishes the strength of the approaching trough just as it begins to move onshore with some light precip into Del Norte Co near the OR border.  Meanwhile the southerly flow over CEN/SOCAL without cloudiness could produce warming temps.  Overnight light rains spread southward into the North Bay region.

Tue, Apr 8th shows a split flow pattern developing west of CA with a minor disturbance forming west of Monterey.  Confidence in this feature is low.

Wed, Apr 9th shows a weak trough passage thru CA which deepens as it reaches into the Great Basin, with increased NW flow over CA providing possible gusty winds.

Thu, Apr 10th shows a -28°C cold core storm formation west of the OR coast which is aimed at NORCAL.  This feature is traveling along the backside of the trough axis which has already passed thru CA.  A cold NW flow pattern brings cooler temps into most of CA.  This event also has a low confidence level. Days 8-16; shows up to 0.5 inch for the NW Coastal region, diminishing down to 0.1 inch for the Feather and Tahoe region and CEN/SOCAL remaining dry.

GFS 384hr, 16Day QPF Chart, depicting up to 5-8 inches of precip for a large section of NORCAL north into BC, Canada, with up to 3 to 4 inches depicted for the Shasta River basin and northern Sierra into the Feather River basin, with up to 2-3 inches for the Russian River basin eastward into the Yuba.  Amts rapidly diminish down to 2 inches from the Bay region eastward toward YNP.  A sharp demarcation line exists over CENCAL with sharply reduced precip amts in the southern portion of the SJV/Kern Co region.  The Mojave and lower deserts remain dry. Weekly Evapotranspiration rates for the local 7 Counties shows up to 0.82 to 1.09 inches of evaporation for the SJV during the next 7 Days.  The Sierra Crest loss is 0.55 inch up to 1.19 inch near Isabella.