Vendors talk about the value brought to the community. 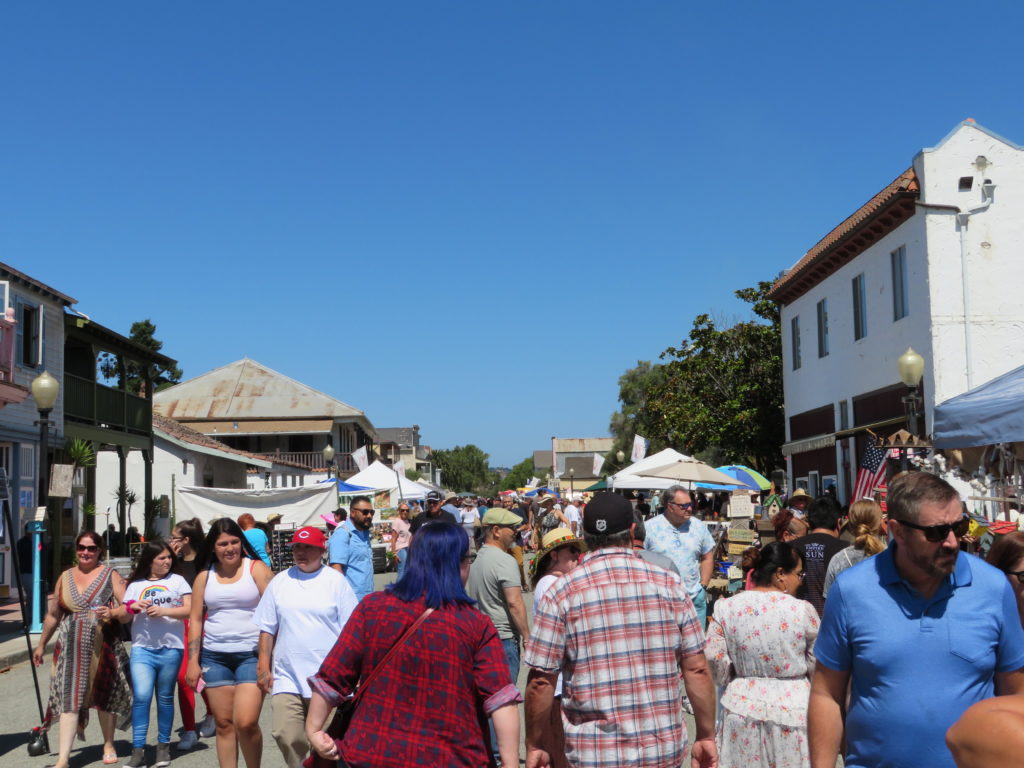 Various collectibles at the fair. Photo by Becky Bonner.

Audon Sanchez of Hollister said, "It's so much fun to be in a large gathering of people with the same interests." Photo by Becky Bonner.

Residents in San Juan Bautista took advantage of the weekend crowd by setting up their own booths. Photo by Becky Bonner.

People looking for vintage typewriters and cameras were not disappointed. Photo by Becky Bonner.

San Juan School took the chance to have a fundraiser by charging for parking at Sunday's event. Photo by Becky Bonner.
×

As visitors arrived in San Juan Bautista for the annual Antique and Craft Fair on Aug. 11, local vendors spoke of how the event helps the local economy and promotes the community.

Walking through San Juan Bautista, large crowds sorted through vintage porcelain pieces and visited downtown stores. Local groups such as the Boys Scouts of America and San Juan School took the opportunity to raise funds for their organizations.

Sweet Pea Antiques of San Juan Bautista not only has a downtown store location, but also set up a booth out front.

As a collective, merchants rent space to sell their goods at Sweet Pea. Dealers from the shop manned their booth and enjoyed interacting with event attendees.

“I love when people come up and say things like, ‘My grandma had that,’” said Diane Todd of Hollister, who sells antiques at Sweet Pea. “We like making deals with people.”

Sitting alongside Todd was fellow Sweet Pea merchant Sarah Jarvis of Aromas. Jarvis said she was drawn to antiques at the age of five and credits street fairs with helping local merchants.

“It brings people into the shop,” Jarvis said. “It’s a lot of exposure for the town and brings business for everyone.”

This sentiment was echoed by Mary Anne Smith of Aromas, who also sells goods at Sweet Pea Antiques. Smith, who has been repurposing furniture for 15 years, shared how a person must have a passion for the work, as it can be hard to make a living.

“I see something that no one wants and make it into something someone wants,” she said. “You can’t make a living with this. You have to have a love for it.”

Esther Rosario, who helped organize the offsite vendor portion of the event, said, “Anything to bring people into town not just for the businesses, but for the pride of the community as well,” is a good thing.

Originally from San Juan Bautista, Rosario now lives in Riverbank in Stanislaus County and returns every year to visit family and friends who continue the legacy of her father by having their offsite addition to the fair.

“My dad was a big supporter of the antique fair,” Rosario said. “When my dad passed, people were hoping we could keep this event going.”

Known for loving antiques, Rosario’s father, Richard Ponce, continued to sell antiques during the offsite event until he passed away three years ago. His brother, John Ponce Sr., is still part of the event at age 91.

Another vendor with family ties to the fair was Audon Sanchez of Hollister. Returning for a second year, Sanchez saw the fair as an opportunity to sell family items that he no longer had room for.

“It’s so much fun to be in a large gathering of people with the same interests,” he said.