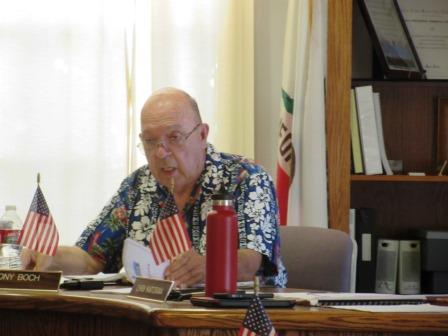 The San Juan Bautista City Council moved to consider new ordinances that will hike water and sewer services rates over a five-year period and considered amendments to zoning development standards after long deliberations at its Aug. 18 regular meeting.

The still-to-be-finalized ordinance for water and sewer services rates is the city’s response to the June ruling on San Juan Capistrano’s tiered water rates, which were ruled unconstitutional because government fees are required to match service costs. Some consider the ruling as an aftermath of the Governor’s tough stance on water conservation.

Like some cities, San Juan Bautista is anticipating lawsuits against its own tiered rates which may be construed illegal. This was expressed by Councilman Tony Boch.

Griffith said, based on the San Juan Capistrano ruling and the study, San Juan Bautista “must re-do the city’s water rates.” He proposed to do it by looking both at the uniform rate and the increases for the next five years.

The discussion that followed revealed more of the city’s water problems, including: $1.8 million that the Water and Sewer Enterprise funds ate out of the General Fund, high nitrite levels causing one out of two wells to be shut down, the city’s hard water, access to drinkable water and an inefficient system for collecting fees.

Former council member Jolene Cosio commented, “We are targeting the wrong demographics to pay this. Some (who use San Juan Bautista supplied water) don’t even have meters. Rates were just lowered recently. We must look elsewhere.”

It was revealed that actual delinquency was down to 12 percent from a previous rate of 35 percent. Grimsley said the city puts "about 30 shut-off notices (as door hangers) every month.”

Mayor Robert Lund replied that the city is working with low-income residents. He said that illegal hook-ups in some areas have been caught and new processes were being explored for fee collection.

San Juan resident John Freeman said some cities such as Hollister and San Diego have tiered water rates but “income is down because of water reduction. You must raise (the fee) by one percent as income falls.”

Vice Mayor Rick Edge observed that a “(water) rate study needs to be done every five years. Right now, water systems are paying more but receiving less because of conservation. But in other cities like Santa Clara and Hollister (the rates) are higher. Unfortunately, (unlike them) we have to watch the money – how it comes in and how we spread it out.”

Councilman Chris Martorana said the city has been struggling with the (water) problem for a long time and that the San Juan Capistrano (ruling) is not pleasant but “we have no choice.”

Boch said, “My biggest fear is that a lawyer might sue us because we have a tiered system. There are people who do that. We’re too small with not enough money to fight these people. Even if we have $150,000 just to fight this, I won’t take a chance. I say let’s bite the bullet and take it out of tier.”

Councilman Jim West added, “This is not a popular decision. I’ll kick the can, too. I have a lot of money (that I put) on my house. I have to worry about fixed income (residents). It’s no fault of their own and we must fix the problem.”

Grimsley took the lead in the discussions about the ordinance to amend zoning standards by encouraging the council to re-think the R-1 single family residential zoning district for land use. He suggested that the standard R-1 lot area of 7,200 square feet be cut down from 5,000 to 6,000 smaller lots and integrated into developments. He proposed that “subdivisions of 20 lots of (units with) 5,000 square feet lots will work.”

He said the flexibility would allow design diversity (“different architectures, not all of them boxes”) into homes. He added that this would also encourage young families and first-time buyers to buy into the entry-level housing, then move on to bigger homes as they grow.

Some problems were revealed when discussion on amendments to zoning standards began.

Martorana commented on the amendments “alleviating problems on ratio of units, making 20 percent more available (to homebuyers).” He also said “the developers are not doing anything” and asked for ways to encourage rental housing in the city.

Grimsley pointed out “convolution of frontage.” Space-saving necessity can sometimes undo the neat, uniformed look of houses, causing entrances and exits to be different in one unit.

Boch cautioned about re-defining zone standards and remarked, “Hollister made a mistake with two acres and they called it comfortable housing.”

West said he liked living in San Juan Bautista even if “some of us have small houses with big parking lots.”

Edge agreed, “There are no postage stamp houses in San Juan Bautista.”

Planning Commissioner/Historic Resources Board Commissioner Eric Gredassoff reported five cases of burglaries inside vehicles mostly on Monterey and Third streets in April. He said this included a white vehicle and the deputy sheriff’s car.

He said that the most reliable report revealed that at about 6 p.m., two males with boxes got into a white Ford Explorer. The vehicle’s license plates from Santa Barbara did not match the registration. The victim reported that CDs and an iPod were among the stolen items. She departed from her routine and closed her car without removing her electronics.

In another incident, suspects got into the trunk of a locked car, shut off its lights, opened the sunroof and made off with the iPod from the console and some 4th of July decorations.

Gredassoff told the council that in October, signatures for a Neighborhood Watch group will be collected at the Luck Museum (along Monterey at Second and Third streets). The campaign will also be promoted through social media.

Action on other items