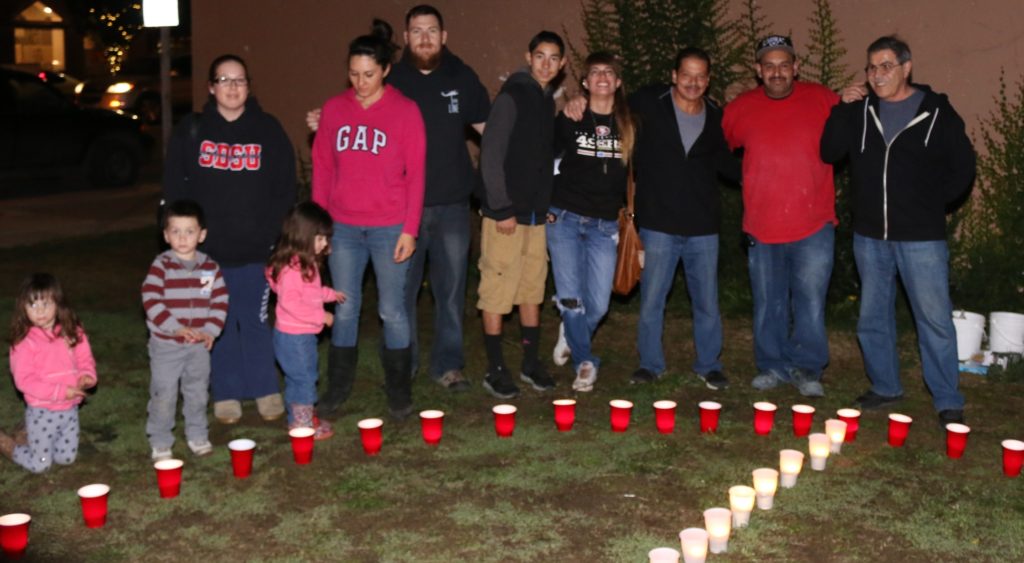 It was a small group, but the feelings were genuine as they held a silent vigil. Andy Adams, an Army veteran who served in the 1st Cavalry Division in Iraq in 2009-10 and Afghanistan in 2011-12, said he felt he had to do something to honor those who were killed in Paris last week by ISIS terrorists. So, he and his wife, Ashley, their four young children, and Ashely’s sister, Emily, put out the word on Facebook to anyone who wanted to join them Thursday night downtown to pay tribute to those people from 31 countries who were killed on the streets of Paris.

A peace sign in the shape of the Eiffel Tower was created using cups and candles on the city-owned lot at the corner of Fourth and San Benito streets.

“I wanted to show support for the victims to terrorist attacks over the recent months, and particularly for those in Paris,” Adams said. “I’m a veteran and I was shocked by the images I saw on television. It just reminded me of a place that was so foreign and far away for me. Seeing it on television like that brought up a lot of old feelings. So, I just wanted to do something positive because there’s so much negative stuff in the news.”

Emily Cooklin said she designed the flyer for the vigil at Adams' request.

“I’ve seen everyone posting about praying for Paris and just being there for everyone,” she said. “I thought it was a good thing.”

Then he added: "Thank you for joining us tonight as we not only pray for Paris, but as we pray for the world. Tonight is not a night for political discussion, but a night to cooperatively show our support for the victims of the world's most recent tragedies. As we stand her tonight and offer our thoughts and prayers, may we continue to always pray for peace around the world."

There was a moment of silence, as traffic raced along San Benito Street, and those inside were unaware of the solemn little vigil being played out on the grassy square.