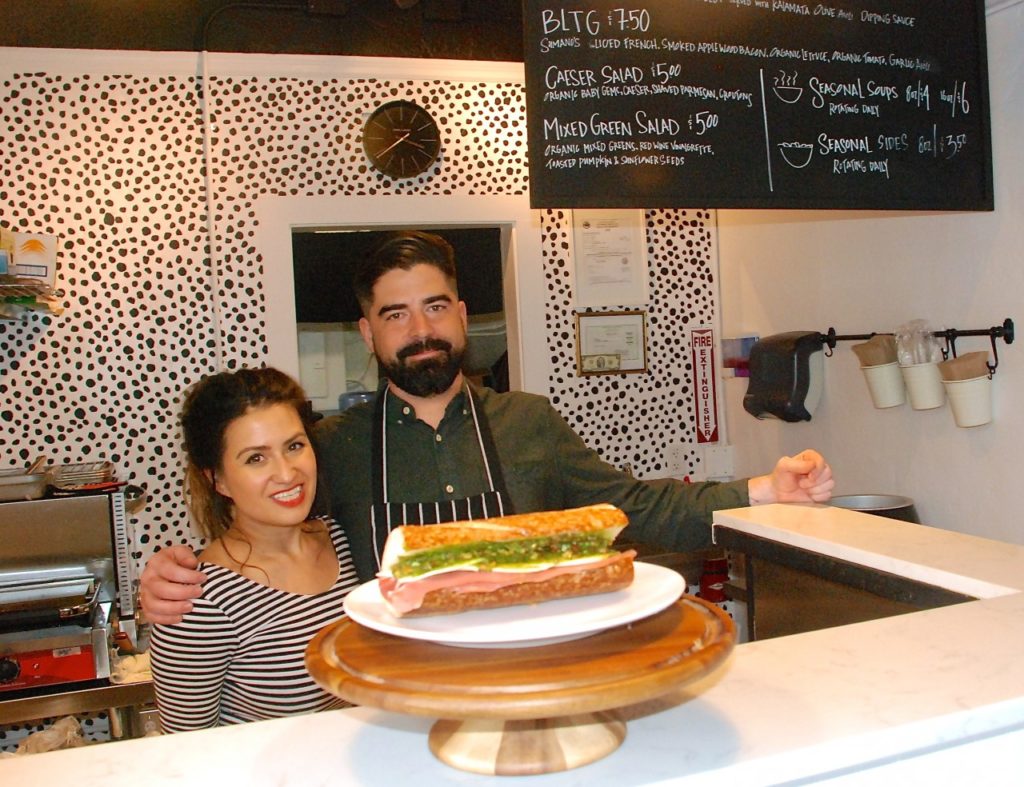 Sarah Griss and her husband Olivier Griss are the founders and proprietors. And business is going well. Last Friday the edible offerings sold out by 2:30 p.m.

The theme at Lolla is affordable food made with fresh local ingredients.

“Our goal,” the café website says, “is to give our customers an avenue to eat locally and seasonally by sourcing from local farms and food producers. We strive to make eating healthy, quick and convenient without compromising quality. Everything from scratch, the way it should be!”

Another participant in the business is Sara Griss’ brother Lucas Lopez. He’s a cook in Santa Cruz

“It’s kind of been a collaborative effort between me and my brother, as far as the menu development,” Griss said.

The menu includes such items as a roasted butternut squash sandwich, and The Mission Melt sandwich. It’s made on sliced French bread from Sumano’s Bakery in Watsonville, with smoked applewood bacon, organic lettuce, organic tomato and garlic aioli. The price is $7.50.

Another featured sandwich is The Uncle Tony. It features a sourdough baguette with mortadella cheese, salami, giardiniera, homemade garlic aioli and arugula. The Uncle Tony costs $8.50.

Or you might like The Cousin Vinny. It features sourdough bread with proscuitto, provolone cheese, arugula and pesto.

Organic Caesar and mixed green salads are available as well as soft drinks.

The Grisses put quite a lot of sweat into preparing the space for their business. It was formerly a snack shack, featuring hotdogs. They redid the lighting and the flooring, window signage and added kitchen equipment.

“It’s such a small space," Griss said. “We really worked to brighten it up. It’s perfect for what we want to do. It didn’t have space to store much … so it’s perfect.”

Sarah and Olivier met while attending Anzar High School. Sarah is a San Juan Bautista native, and graduated in 2000. Olivier graduated from North County High School in Salinas in 2001.

The couple moved back to San Juan Bautista three years ago from Monterey. Sarah had been selling packaged foods at farmer’s markets.

Olivier formerly worked in the hospitality industry. He is now head of sales at Coke Farm in San Juan Bautista. His mother, Christine Coke, is married to Coke Farm founder Dale Coke.

“So all the tools were in place to start this (business),” Olivier said. “It’s exciting. … We’re trying to keep it pretty simple in the beginning,” he said, “and just see what people want.”

He said he’s anxious for spring and summer organic harvests to begin so they can add heirloom tomatoes and other fresh fruits and vegetables to the menu.

Sarah said they are starting out slowly and taking their time building the business, “Because we don’t want to sacrifice quality.”

Lolla’s clientel includes locals and tourists. There are just three seats inside the café and four outside. Sarah said it’s best if you call in your order ahead of time. They plan to loan out picnic blankets so people can eat their food on the mission lawn if they like.

As for the business’ name, Sarah said she originally wanted to name it “Eleanor,” after her grandmother. But her grandmother objected. So she came up with Lolla Rossa, a purple leaf lettuce grown in San Juan Bautista. It eventually became just Lolla.

However, a friend told her the word “lola” in Tagalog, the language spoken in the Philippines, means “grandmother.” So her original name for the businesses nearly won out.

For more information, call 831-593-5064 email to [email protected] or visit the website at www.lollasjb.com. The business also has a Facebook page.