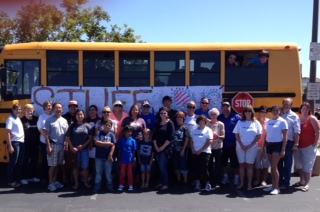 United Way’s commitment to ensuring that all children have the opportunity to succeed in school and in life is the motivation behind the 2014 Stuff the Bus school supply collection project. The second annual event, in partnership with the County Office of Education, proved to be a huge success this past Saturday. Through the generosity of local donations, volunteers filled 683 backpacks that were distributed to elementary schools throughout San Benito County.

“Last year we had only a two week window to collect supplies so backpacks were sent to just one school district," said Stuff the Bus event chair, Diane Barr. "This year we (United Way) have been collecting donations since July 1 and the result was fantastic! Packs were given to all 11 of the elementary school districts served by the San Benito County Office of Education. The community really came through for our youth."

Locals were asked to either donate from a school approved list of supplies or by purchasing a backpack pre-filled with supplies. Donations of supplies were collected at the United Way office, and at Enterprise Martial Arts, Rabobank, Round Table Pizza, Target Store, Union Bank, Wells Fargo Bank, and the YMCA.

According to United Way Coordinator, Vicki Fortino, “This year we set our goal at 500 backpacks filled with supplies. Through the generosity of our sponsors, civic groups and community members, we were able to exceed our goal. The community embraced this United Way initiative, and as a result 683 children will begin school ready to succeed.”

"The generosity of these sponsors has a direct impact on the immediate needs of children in our county," United Way officials said in a release.

For the culmination of the event, volunteers gathered in the Target parking lot on the morning of August 9 with a county school bus that they filled with backpacks. “United Way is most grateful for the volunteers. This year we had more packs to fill, but we also had more helpers so we finished quite quickly” said Mary Damm, United Way board president.

Donations for the Stuff the Bus are still being accepted. Contact Vicki Fortino at [email protected] or visit www.unitedwaysbc.org.