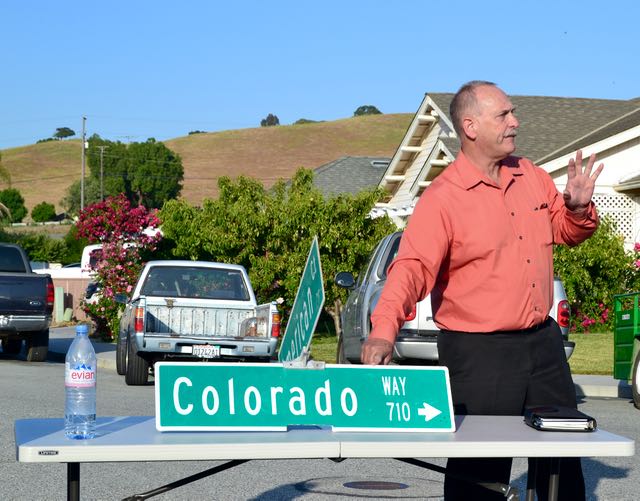 Friends, family and neighbors gathered at Riverview Estates on Monday, May 9 to discuss the issues affecting their community, including safety, crime and neighborhood improvements. Rachelle Escamilla, whose family has lived in the neighborhood for many years, invited District 4 San Benito County Supervisor Jerry Muenzer to answer any questions and concerns residents had. County Management Analyst Louie Valdez was also in attendance to translate in Spanish.

Resident Maribel Banda Cortez addressed Muenzer by saying, “I have lived here five years. One of the main concerns I have and I know a lot of the neighbors have, is we only have one (street) light and for most of the time they don’t turn on. Not too long ago, somebody was found dead across from my house in the trees.”

In April, Anita Manzo De Flores was reported missing. Her body was found a day later near the San Benito River, west of Hospital Road near the neighborhood. The case is still under investigation, though no foul play, or any criminal activity is suspected.

Cortez later added, “there is a lot of criminal activity happening on that side of the river: cars racing in the night, there has been accidents going down the river and in fact they have hit my fence a couple times… is there any other way we can get a safer fence?”

Muenzer answered Cortez’s concerns saying, “the county does not provide lights. Street lights are considered a city amenity. Fences are not something the county provides. Because you live in a county service area (CSA) you basically can have anything you want as long as you’re willing to pay for it,” he continued.

Muenzer added the residents would not be able to get control of the money once it goes into the CSA fund because it becomes public money. “I have to admit to all of you, the county has not done a good job taking care of you who live in CSA’s,” he said.

Resident Julio Salazar also listed security and crime as being some of his concerns.

“Garbage is being dumped in the river, kids coming to do drugs here, many high schoolers come and hang out at the old hospital, graffiti in the hospital, they come and park their cars here, and there are kids who come and ride the bus here and there is no sidewalk for them. There are a lot of homeless people living in the river. There are many security risks for our kids,” he said.

“What we would like is for there to be communication with the county, with the sheriff,” Salazar said.

Muenzer responded, “In dealing with the crime and the possibility of lack of the deputy sheriffs out here and not knowing how many people to expect here tonight, I called Sheriff Darren Thompson and spoke to him about whether he or one of his deputies could address the community meeting."

He added that he wasn’t qualified to answer residents' safety concerns, but would like to hold a second meeting with someone from the sheriff's department who could.

The conversation then turned to the old hospital on Southside Road.

Muenzer recognized the facility as being a nuisance, adding, “Two things are happening with the hospital. The county wants it torn down. We put $500,000 in the budget to tear it down. We also want to sell the property to the same organization that built this community to build more self-help houses up there.”

The hospital was slated to be the location for a homeless shelter with supervisors voting 4-1 in favor of that plan in 2015. The project was intended to provide living spaces for approximately 50 people and was to be financed by a $1.5-million state of California Community Development Block grant. That plan was later scrapped.

Residents also asked Muenzer about a park being built for the children of the community. He said even though he didn't know much about the 200-unit development that is planned near the eastern bank of the San Benito River, bounded by Hospital Road on the south, Southside Road on the east, and orchards on the northeast and north sides, it would include a park for both neighborhoods to use.

As for next steps, members of Riverview Estates were encouraged to voice their opinion about what they would like to see in their community. Once a list of improvements has been made and voted on, the county will determine the cost and how to pay for them. A neighborhood watch and Facebook page is also in the works to help to mitigate crime in the neighborhood.

Although there is no set date, organizers hope to hold a second meeting in coordination with the sheriffs office to get safety concerns answered.