If voters pass the new business license tax in November, it is expected to raise $453,600 annually. 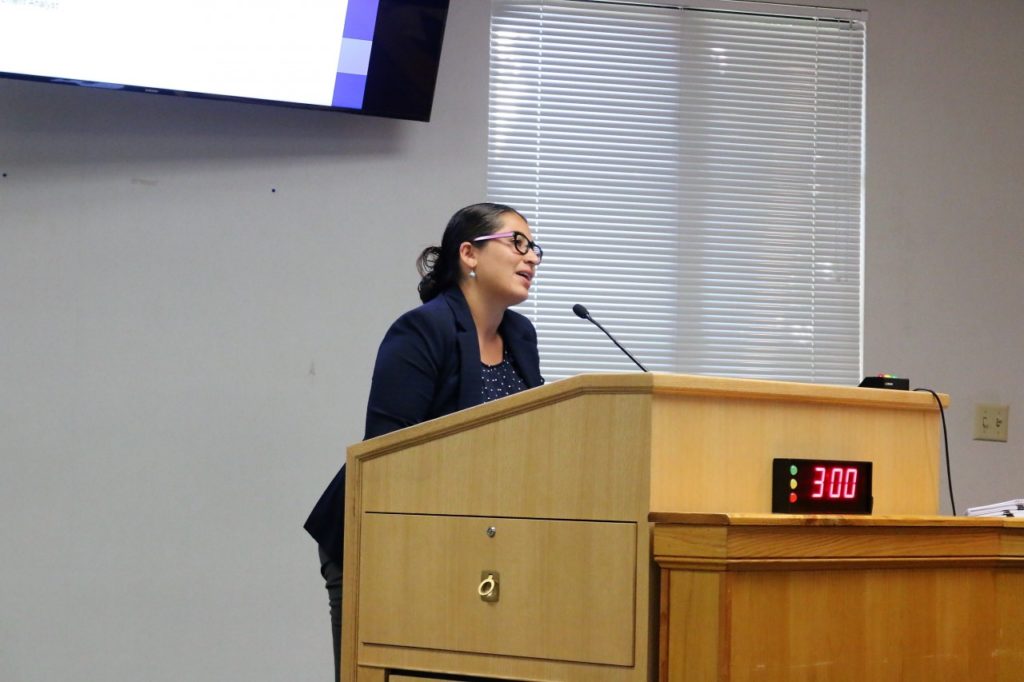 Management Analyst Dolce Alonso went over the various options for supervisors, explaining how much money would be collected for each. Photo by John Chadwell.

Having failed already at convincing voters to pass Measure P, San Benito County supervisors are stepping up to the plate for another swing at a tax fast-ball in the belief that voters have learned since the 2016 defeat that revenues are needed for not only roads, but to simply run the county.

In addition to the 1 percent sales tax there will now be a business license tax added to the Nov. 6 ballot, despite supervisors’ past concern that voters will not differentiate between multiple taxes coming their way in the next few months.

The San Benito County Board of Supervisors adopted a resolution Aug. 7 to place a business license tax measure on the Nov. 6 ballot which, if passed by a simple majority of 50 percent-plus-one of all county voters, will generate an estimated $453,600 in revenues annually. There has not been a county business license tax since the defeat of Measure D in 1996.

Until recently, supervisors were reluctant to even discuss bringing up a business license ordinance. They were not sure voters would accept, or even understand, adding another tax when they were also contemplating placing a 1 percent sales tax on the ballot (approved in July), a transient occupancy tax on hotels, and a cannabis tax on businesses (cannabis companies will pay both business taxes), on top of the state’s recently passed Senate Bill 1 gas and vehicle registration tax.

During that same meeting, Supervisor Anthony Botelho said he wanted the public to know there is a crisis in the county regarding staffing, recruiting and retaining employees. Botelho then said that he was the “leading cheerleader for a special tax, but it would be a hard sell to convince voters that there might be funds from the state if they just pass a local special tax.” He added that he hoped the business licenses and cannabis taxes, truck impact fees, and the mining extraction tax might help.

County resident Steve Rosati said at the May 9, 2017 supervisor meeting, “It will be tough selling 1 percent for a whole variety of things, and if people don’t believe it, we’re not going to have anything. I know it failed before, but we have to think about concerns of the public in the future.”

The justification for bringing back the business tax concerns the county government’s struggle to meet the expanding need for public services and the increasing cost of those services, according to background documents presented to the board supporting the passage of the ordinance.

Dulce Alonso, county management analyst, said in an Aug. 13 email to BenitoLink that if the business license tax passes, funding will contribute towards regulating lawful businesses operating within the unincorporated region and protect the general public by improving their safety.

At the July 24 meeting, the Board of Supervisors tasked County Administrative Officer Ray Espinosa with developing options for enhancing county revenue.

Espinosa came up with four options, the first being to simply bring back the old ordinance imposed on businesses in the unincorporated area that voters rejected in March 1996, plus a 20 percent escalator. The amount of the tax was dependent upon the type of business operation, or a nominal amount based on the number of employees, plus an additional amount based on the volume of business. The four proposed options would raise anywhere between $378,600 and $604,800 annually.

According to county documents, when Measure D went before voters in 1996, attached to it was an amendment to raise the minerals depletion tax from 5 cents to 7.5 cents per ton for surface mining operators. The mining industry campaigned against Measure D because it was added to the ballot as a general tax measure that would funnel all monies into the county general fund rather than to repair roads as voters wanted. When it was defeated, the entire business license ordinance was overturned as well.

If the new ordinance passes in November, the newly elected tax administrator, Melinda Casillas, will assign each business a classification that most closely fits the applicant’s business at the time of calculation of the applicant’s tax. Only farmers or ranchers growing agriculture products, livestock or poultry who sell those products, as well as charitable and non-profit organizations, will be exempt from the ordinance. (See a PDF file of the ordinance below).

The resolution passed unanimously without discussion by the board or comments from the public.