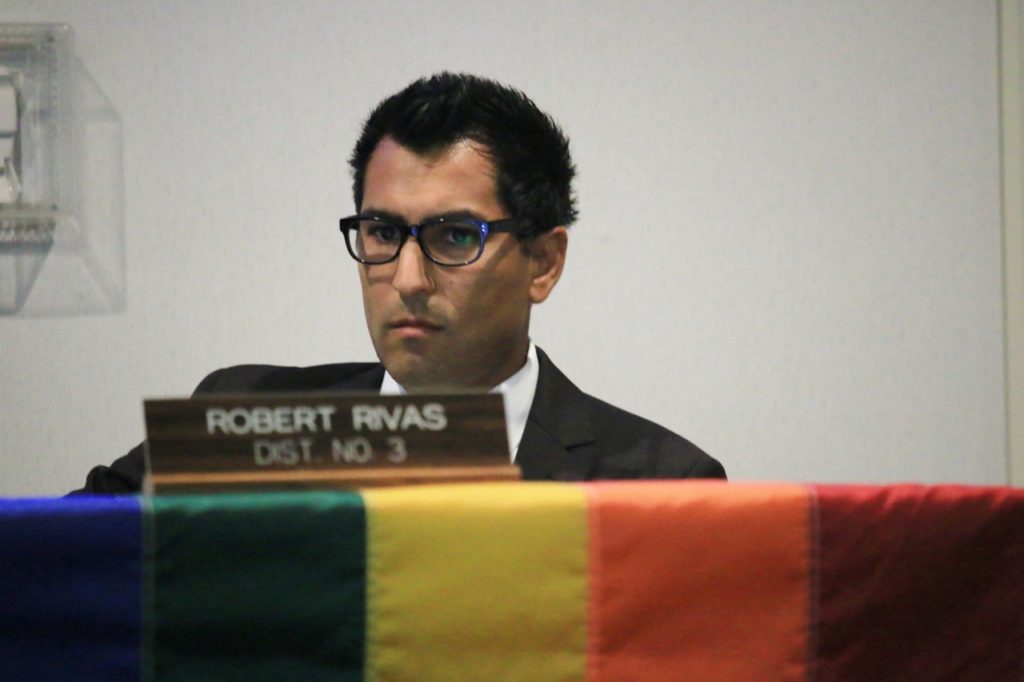 Tuesday’s San Benito County Board of Supervisors’ meeting took a turn from the business-as-usual agenda to heartfelt pleas for tolerance for the LGBT community and a ban on assault weapons sold in the county.

When Supervisor Robert Rivas announced the public comment portion of the meeting and asked if there was anyone who wanted to comment on any topic not on the official agenda, Omar Vasquez was the first to step up at the podium to tell the board that he was speaking out of sadness and with a heavy heart for those who were killed Sunday morning inside the Pulse nightclub, in Orlando, Fla.

“My heart and condolences go out to all the victims and the families that were affected by this tragic act of violence,” Vasquez said solemnly. “I also wanted to take the time to thank all the first responders who fought to protect the lives of innocent people, and do so every day.”

He said his heart ached particularly because June has been designated as National Lesbian, Gay, Bisexual, and Transgender Pride Month.

Despite the recent victory of marriage equality that represented social progress, Vasquez said, the long-sought battle for equality continues.

“The LGBT community has suffered a great loss,” he said. “As a member of this community and the LGBT community, I urge everyone to stand strong against hate and violence, and focus around helping those around us to become more open-minded and accepting of each other. Regardless of race, gender, religion or sexual preference, we are all human.”

Hollister resident Jennifer Coile said she believed the killings in Orlando presented the county board of supervisors an opportunity for leadership to promote peace and violence prevention in four ways: the first being to promote acceptance of the LGBT community; promote tolerance and protection of Muslim-Americans or those who look like their origins are Middle Eastern; further support mental health services; and promote gun controls of AR-15s in the county (though it probably doesn’t make much difference which weapon was used to commit the mass murder, the actual weapon, according to news sources, was a Sig Sauer MCX carbine).

“The Orlando massacre is personal,” Coile said. “I have a gay brother. I’ve had gay roommates, and I have dear gay friends here and elsewhere. My daughter couldn’t stop crying over the idea that someone had rubbed out LGBT people who were out to enjoy music and dancing.”

She said LGBT people are in the community and she wants to make sure that they are safe.

“I want to be able to tell my daughter that this board has taken a stand against hate and prejudice,”  Coile said, adding that she is a member of the San Benito County chapter of the Japanese-American Citizens League, which she said was the first in the nation to speak up after 9/11 against any possibility of rounding up or imprisoning Muslims or other “brown-looking people.”

“The Japanese-Americans living here in San Benito County were interned in prison camps during World War II, even though 60 percent of them were American citizens,” she said. “'Never again,' is the message of the Japanese-American Citizens League, and, hopefully, for this board.”

She also claimed the accused Orlando killer was “untreated bi-polar,” and then she shifted to gun control with, “I don’t think there’s a fixed location for gun sales in the county, but people can order them online and have them delivered by UPS and FedEx. Can we put up a ban at our boundaries?”

Then she addressed Supervisor Margie Barrios directly: “You’re on the school board. Think of the young people. Do we want a massacre at Sunnyslope the way they had at Sandy Hook?”

Hollister resident Marty Richman said people in general are self-centered and commented that there have been terrorist attacks not only against the gay community.

“The attack in San Bernardino was not against the gay community,” he said. “Terrorism is a problem worldwide. Most Americans probably don’t know that there has been a terrorist attack in France since the shooting in Orlando (a man with a previous terrorist conviction killed a police commander and his partner at his home June 14, according to The Guardian). So, I hope anything you say will condemn terrorism everywhere against everybody, no matter what the reason.”

Gregory Rivera said his family has lived in the area since 1932. He asked the board to stand with every LGBT member in the county. He said that in 2008, when Proposition 8 was voted in to make same-sex marriage illegal in California, he joined Marriage Equality USA.

“We collected at the Farmers’ Market the names of over 8,000 people and that’s just the tip of the iceberg,” he said. “Ten percent of the community at large is LGBT. What we find on the Internet is it is much greater.”

Rivera went on to say that LGBT people have been around, “since the creation of man,” and asked the board to consider forming an LGBT commission, and to ban the AR-15.

“Why don’t we go back to the musket?” he asked, half-jokingly. “That was a real gun. You don’t need an AR-15 to hunt. I have friends who still hunt with bow and arrows. We need to ban those guns.”

Then he addressed the “religious people,” stating: “You have to ask yourself something. How many more gay people have to be born before you realize God actually wants us around?”

Barrios said she supported the public speakers and said the board needs to step up and to come up with a resolution to support safety for the LGBT community.

“It’s a very brave thing for people to come forward,” she said, adding that she has family members who are gay or lesbian. “The thought of losing one of them is more than heartbreaking. All of these folks who were lost were children, they were sons, they were sisters, they were brothers, and they were friends.”

Supervisor Jerry Muenzer said he was appalled at what took place in Florida, and said he agreed with Richman that other terrorist attacks have taken place since then. He said people need to pray about what is happening worldwide.

“All of us woke up Sunday morning to the horrors of what happened in Orlando,” said Supervisor Anthony Botelho. “It’s heartbreaking whether you’re from the gay community, straight, a Democrat or Republican. In San Benito County, we’re a diverse community of many cultures and orientations, and we need to support each other.”

He said he wanted to find ways to work with the other supervisors and the community to embrace their differences.

Supervisor Robert Rivas, who had Tweeted earlier in the day that he would be making a special announcement during the meeting, had draped the Rainbow Pride LGBT banner in front of his name plate. He said the board rarely comments on national issues, but he wanted to discuss what happened in Orlando and how it impacts those who live in San Benito County.

Rivas said the number of people killed was staggering and that President Barack Obama had declared it as acts of terrorism and homophobia.

“The sad thing for the LGBT community in the United States is they have been victims of terrible crimes,” he said. “They’ve been attacked in bars, at rallies, at protests. Their leaders have been killed. There’s no question the hatred and discrimination is rooted in how we raise our children, in the ways we educate our young people and the ways we carry ourselves every single day.”

Rivas went on to say—and later released the statement on Facebook—that if children are taught that It is OK to hate and treat people differently because of who they are and the way they were born, then the parents are sowing the seeds of hatred.

His Facebook statement continued: “We all have a role to play.  We all have a choice to make. We can choose intolerance and bigotry or we can choose acceptance and love. If we stand up and speak out against discrimination and homophobia every single day, we’ll make this community safer for everyone.

“And that’s why I’ve brought this gay pride flag with me here today…it’s the reason I've decided to hang it below my name plate. I want to send a message to the LGBT community in San Benito County.  To those of you who are gay, lesbian, bisexual, or transgender, we support you. I support you.  You can love whoever you want to love here in this county.  I support you and I stand with you.”

Rivas wrote that those in the LGBT community don’t have to live in the shadows of the county any longer, and they should be proud of who they are and live open lives.

“Over the coming months, I hope this board will consider creating an LGBT study group to analyze our local programming [and] our policies, to ensure that we’re doing all we can to build an inclusive and accepting community, here in San Benito County,” he wrote. “San Benito County has to do more to be more inclusive, more supportive. We need to dedicate resources to this cause. Let us come together, in honor of the victims in Orlando.”

He concluded in the meeting that he would like to form a committee, including himself and Barrios, to come up with a resolution, though he didn’t state what that might entail.