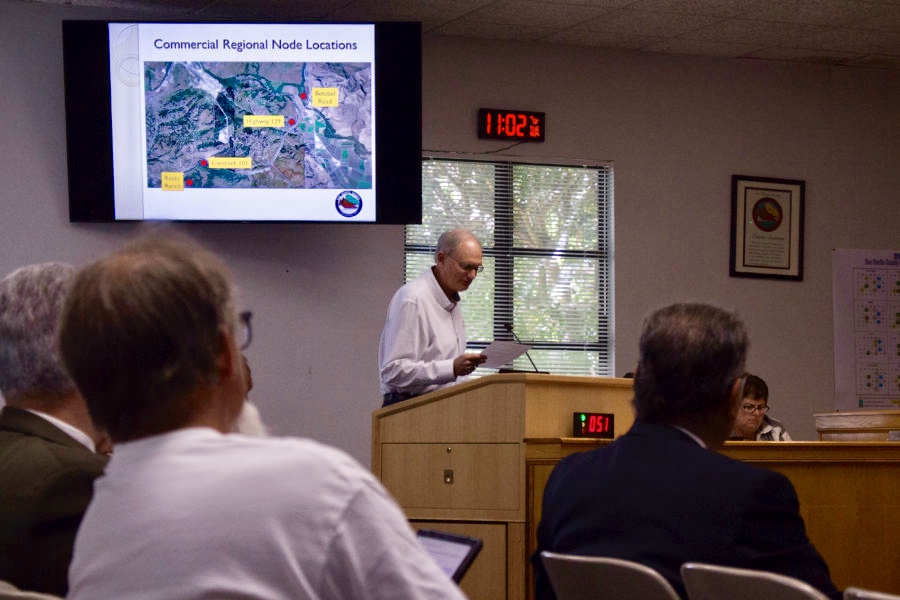 Scott Fuller, developer and member of the San Benito County Business Council, reads a letter of support for the Highway 101 commercial nodes at the Sept. 24 Board of Supervisors meeting. Photo by Noe Magaña.

The San Benito County Board of Supervisors unanimously approved zoning changes to four commercial nodes along Highway 101 at its Sept. 24 meeting. The board promised to review any commercial developments proposed at the sites in order to protect the environment and small town atmosphere of surrounding communities.

The county is rezoning four sites—Betabel, SR129/Searle Road, Rocks Ranch and Livestock 101—in an effort to increase revenue by attracting Highway 101 motorists to spend money at the nodes, which could include gas stations, fast food restaurants and hotels. Since the rezoning process reached the Planning Commission on May 15, the county has faced criticism regarding water, increased traffic, loss of agricultural land, and the potential effect on San Juan Bautista businesses. On June 18, the San Juan Bautista City Council voted to send a letter to the county in opposition to the commercial nodes.

“You’re going to suck our economic engine in San Juan dry,” San Juan Bautista resident Jackie Morris said. “They are nothing more than sideshow, quick-fix, quick food, and they are going to divert the traffic away from our community and especially San Juan Buatista where there are small businesses.”

After 10 people spoke against the rezoning, Supervisor Jim Gillio said he understood the sentiment of those opposed to the development; that they are being told by the county to implement something they feel will have a negative effect on their city. However, the General Plan has a lot of protections for San Juan Bautista, he said.

“Although I support this today, I will be prepared to scrutinize each one of these projects,” Gillio said. “I met with you personally and I told you that, and I sincerely mean that. And anything that we can do to help benefit San Juan Bautista if and when there is a project that comes through, you have my commitment to do that.”

Supervisor Anthony Botelho echoed Gillio’s message. He said the zoning ordinance, which he called the “most restrictive and detailed” in the state, requires any development to conform to the landscape and address water concerns.

“It was really important to me, personally, to make sure that we preserve and protect our environment,” Botelho said. “And everybody in this room has known that I’ve done just that on a number of different issues. This is no exception.”

Hollister City Councilman Marty Richman spoke during public comment and said he supported the commercial nodes because San Benito County needed the income. But in order to get the best product, the county needed to create competition, he said.

“I think you ought to start with the best two to start with,” Richman said. “The competition to finding the right one will get you a better deal also.”

Supervisor Peter Hernandez responded to residents who opposed the rezoning.

“This is not profits over people.” Hernandez said. “There are different things that are required to support the community and funding is a mechanism of it. There is a balance and striking that balance is really hard.”