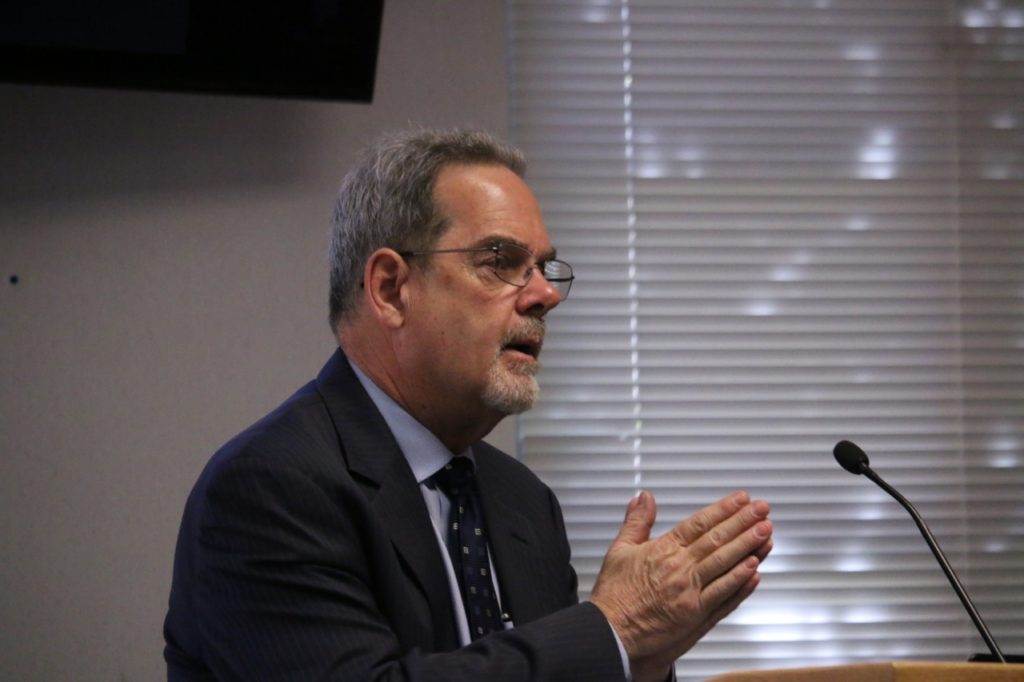 Barely a week after the sudden, and somewhat ambiguous, announced retirement of Brent Barnes, who served the county as the director of the Resource Management Agency (RMA), the San Benito County Board of Supervisors this week voted unanimously to approve an amendment of a contract with 4Leaf, Inc., which will serve as the interim director of RMA until Barnes’ successor can be recruited. The amendment increased the original $10,000 contract for two consultants to $234,000 for a one-year period, as compared to Barnes’ $169,000 annual salary.

According to county records, after Barnes left it became necessary to find professional assistance to perform his tasks. The county executed the contract with 4Leaf to start performing those duties on March 22. The work will be divided between Larry Perlin, who will act as the interim director of transportation, and James Walgren, who will handle the duties of director of RMA, and county engineer.

Before the vote, County Analyst Louie Valdez explained that the two each have 30 years’ experience in engineering and planning. Walgren told the board that he and Perlin would co-manage the agency and that both of them had managed community development departments in the past. He said he had recently worked as the city manager for Los Altos. Perlin, who said he had been on the job two days, commented that all the elements are in place to “right the ship of RMA.”

The amendment did not go without challenge, though. Debra Narvaez, regional director of Service Employees International Union (SEIU) Local 521, said the contract would increase cost to taxpayers without a well thought-out plan. She explained that the county had decided more than a year ago to combine the planning and building departments with public works in order to achieve salary savings and hire more frontline staff. She said the contract with 4Leaf was proposed because of “failed management and oversight of this (RMA) department.”

“This is a waste of county taxpayer dollars and the county should be seeking innovative opportunities to create a shared services with the City of Hollister before contracting out two positions at an exorbitant amount for non-county employees,” Navarez said.

She went on to say that the county hired a consultant for the Human Resources Department more than four years ago. She said even though the consulting firm had successfully put a “failing HR department back together,” there still was not a county employee handling the department.

“It now seems to be a pattern of us continuing to bring in long-term contracting entities instead of hiring public workers from this county and invested in this county,” she said.

Because of recent storms and the multitude of problems they caused, Navarez said more frontline staff was needed to do the work, and not someone to sit in an office to manage.

“Spending $234,000 for a seven-month contract is absolutely unacceptable,” she said. “It’s time that we actually invest in the workforce that provides those direct services.”

Ray Espinosa, county administrative officer, explained that the county attempts to recoup costs from developers and keep track of the time the two consultants work.

“We really need to have leadership in there with plenty of experience to do the transition before we hire somebody else,” he said.

Supervisor Anthony Botelho agreed with Espinosa on the need for the consultants’ expertise.

“There’s nobody down there right now who can do it,” he said. “I think they can turn that department around. From my observation on both ends of RMA, the processes are not there. It needs to have it. Otherwise, we can’t move forward as a county.”

Supervisor Jaime De La Cruz asked Valdez if bringing on the two consultants now would give the county the opportunity to search for a new hire for RMA. Valdez said because of their expertise in engineering and planning, the county was asking them to focus on those two areas. Meanwhile, he said there is not sufficient communication to provide customers with updates regarding permit applications and money they paid to the county. He said that he and Joe Paul Gonzalez, the county auditor, had been to RMA over the last two weeks since Barnes left to address some of the processes from administrative and financial management perspectives.

“We have gained immediate results,” Valdez said. “In the past, deposits were made on a weekly basis for all the monies that came in. We’ve instructed staff to do that on a daily basis. This is a work in progress and it will take some time. I take issue with the characterization that there is no plan in place. We do, in fact, have a very detailed plan going forward.”

De La Cruz said it is important to hire someone because “that ship is sinking right now,” and the public is concerned. He said that while the board supports and defends county employees, it needs expert help sooner rather than later. Supervisor Mark Medina concurred with De La Cruz that the consultants would help the county buy some time as it looked for a replacement for Barnes. He said even though he preferred the contract to run for six months, he was OK with a year-long contract.

“We need to make sure we have a replacement for this individual (Barnes) that’s not going to be a consultant forever,” he said.

Supervisor Robert Rivas said the cost of combining two departments, plus the cost of the consultants, adds up to an expensive effort to ensure efficiency in the county. He also said there is a need for periodic updates from RMA. Valdez said he understood the urgency and everything possible was being done to “right the ship.”

Supervisor Jerry Muenzer said the county needs to be careful in targeting one year to find a replacement for Barnes and that the county has experienced difficulty in attracting top-level management because of the inability to pay them what other counties are offering.

“We need to be careful of putting a timeline on this because it may force them (administration) to hire someone who is not the right fit,” he said.

De La Cruz said that while he agreed with Muenzer, he thought it was important to have benchmarks and due dates in case more time was needed to find the right person. He also said he wanted the public to be kept in the loop so they understand the process and why it might take more than a year to find a replacement.

Botelho said that while the contract would run until March 16, 2018, it was his understanding the county was already trying to recruit someone. Valdez corrected Botelho by saying the first goal was to address some internal issues, as the consultants concentrate on planning, building and engineering, as well as integrated waste management.

“We want them to focus on those because the greatest source of frustration that I have seen is that there is very little follow-through with projects that begin, then go through the system and somehow disappear into that bureaucratic morass that we all understands happens from time to time,” Valdez said.

He added that while the two consultants focus on their responsibilities, county staff will attempt to move forward on database efficiencies that are currently lacking.

“It’s not lost on us that these are issues that the public is frustrated with,” Valdez said. “We have them well in hand and are moving forward.”

When De La Cruz asked Valdez what financial impact RMA has on the county, Valdez responded it was significant because the department is one of the largest in the county.

“It plays a central, fundamental role in the operations of San Benito County,” Valdez said. “We’re not going to let that ship sink. We’re going to prop it up and send it in the right direction. If we don’t do it right this time, we will have major problems.”

After the meeting, Valdez told BenitoLink that the references to “righting the ship” made several times during the discussions referred to the chaotic state of RMA discovered after Barnes had left. He said staff realized that Barnes needed more administrative support for the wide range of duties being placed on him, but it was apparent that “he did not consider that a priority.” Then on March 29, Valdez told BenitoLink via email that Barnes’ effective retirement date was Aug. 25, and that he was “staying away from the office, using his leave time.”

Mobile office hours are an opportunity for members of the community to meet with congressional staff and are offered in addition to meetings in the Salinas and Santa Cruz congressional offices.