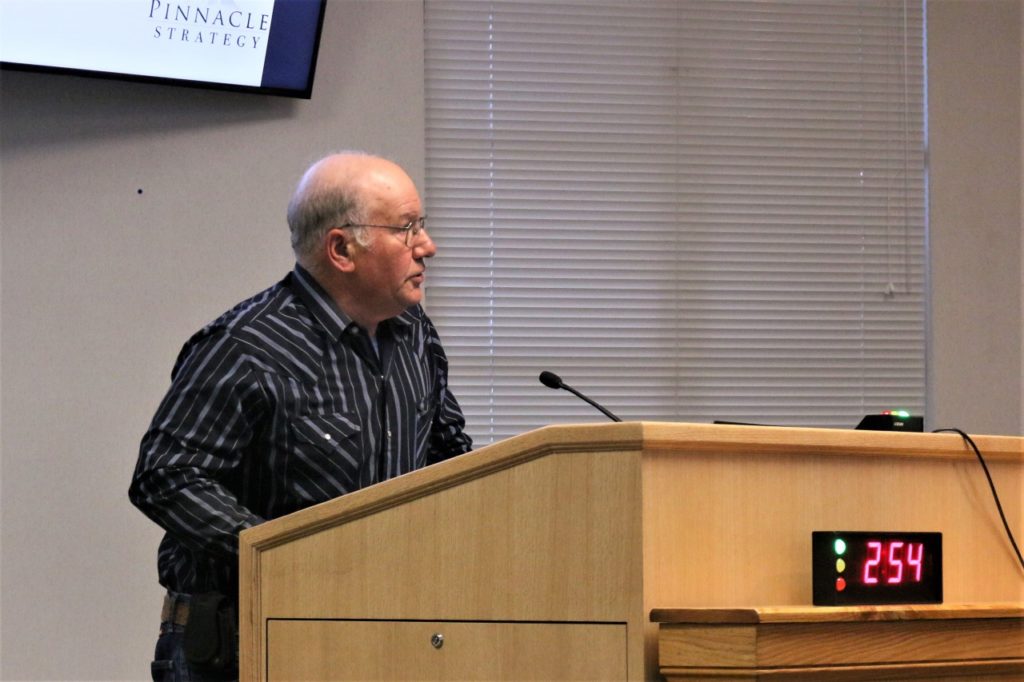 THe San Benito County Board of Supervisors held an evening study session May 9 to give residents and interested parties the opportunity to hear an update and voice their concerns on the 27-page draft cannabis business ordinance. Before Victor Gomez, the former Hollister councilman whom the county hired to facilitate drafting the ordinance along with the marijuana ad hoc committee—Supervisors Robert Rivas and Mark Medina—began, chairman Supervisor Jaime De La Cruz cautioned that if those who wanted to speak strayed from the topic of medical cannabis he would “gavel” them off the podium.

Gomez covered familiar territory, laying out the course of Prop. 215, passed in 1996 legalizing medical use of marijuana; Prop. 64, passed in 2016 to legalize the adult use of recreational marijuana; and the work of the ad hoc committee over the past eight weeks. He said the committee had discussed a wide range of topics, from land use, cultivation sizes, approved greenhouse structures, what the tax structure would look like, setbacks from cultivation sites and cost recovery.

“The intent of this ordinance is to prevent business activities involving non-medical cannabis and to regulate cannabis business activities in a manner consistent with state law and federal guidelines, which promote health, safety and general welfare of residents and businesses in the unincorporated areas of the county,” Gomez explained, “while accommodating the needs of patients and limiting nuisance and environmental impacts associated with cannabis cultivation.”

Gomez went on to say that once the ordinance passed, the ad hoc committee would bring back to the supervisors within 60 days rules, regulations and operating procedures designed to bring illegal operations out of the darkness and be regulated. He said the county was already dealing with enforcement issues and was not recouping costs and that would change through fees to process applications and permits. He said there are presently seven permit categories: 1A specialty indoor, 1B specialty mixed-light, 1C specialty cottage, 2A small indoor, 2B small mixed-light, 3A indoor, and 3B mixed-light.

“This ordinance creates a cannabis business regulatory program for the county operated by a cannabis coordinator,” Gomez said. “This person would be housed within the county administrative office and would focus on just the cannabis regulatory component of this industry, along with a variety of stakeholders in different departments.”

There will be no permits for commercial manufacturing, testing, dispensing, distribution or transportation in the unincorporated area, Gomez added. He said fees would be collected for application processing, permitting, and ongoing inspections. He was confident that the county would recoup any related costs, particularly after a cultivation tax is in place, and that applicants would be able to request a waiver if aspects of the application provisions caused unusual hardships.

Where zoning restrictions were concerned, the ad hoc committee recommended that no cannabis cultivation could take place south of Bolado Park, based on water issues and code enforcement capabilities in the rural areas of South County that are zoned for agriculture range lands.

Supervisor Mark Medina asked Gomez what would happen if the cannabis tax was placed on the Nov. 2018 ballot, but failed. Gomez said if the tax fails, the policy fails and there would be no cultivation in the county. Gomez intimated, though, that probably would not happen because “taxing cannabis is pretty popular.”

“Remember, this isn’t a special tax, this is a general purpose tax that goes into the General Fund,” he said. “I believe that Monterey County passed theirs at 74 percent (of the voters). When the rules and regulations do come, you won’t want them to start operating without capturing revenue. You’re going to have to enforce the new ordinance, so within your development agreements, it’s going to be recommended that you work in a development fee, which will be temporary, that will bridge the time between now and when a tax comes into place 60 days after the election is certified. That would be most likely February before that tax comes into play.”

During public comment, Stephany Smith asked the supervisors to include actual regulations in the ordinance to address odors and lights. She also questioned the logic for a waiver because it may cause a hardship for the cannabis business.

“What about the hardship for residents?” she asked. “This ordinance is being drafted for the safety of residents and because the cannabis businesses create a hardship on residents the rules should be protecting them and there should not be a wavier for any of these rules. That creates a big gray area in the law and I think we’re trying to get away from that.”

Sean Kali-Rae said there is a need for multiple licenses rather than a single license per growing operation to prevent small cultivators scattered throughout the county that would cannibalize regular agriculture. He contended that one license per parcel would cause a rush to grab land to grow marijuana. He said it made more sense from a law enforcement perspective where a sheriff’s deputy could investigate one large parcel with multiple licenses rather than small, scattered parcels. He also claimed larger, multiple-use parcels made it easier to keep the operations away from schools and other sensitive sites, as well as concentrate water usage.

Tim McCord said he was concerned over water use. He said that he and other ranchers have to file Notices of Intent (NOI) to farm with the Central Coast Regional Water Quality Control Board and are required to belong to the Central Coast Groundwater Coalition and the Central Coast Quality Preservation and pay fees for both. He said ranchers and farms must also pay to monitor their wells for nitrates.

“You’re going to have to take a hard look if you’re going to have any marijuana cultivation because they’re considered to be farmers,” he said. “The county is going to have to look at what the requirements are going to be. It’s a hit-and-miss situation and it’s getting pretty serious. I’m paying fees in all these things, and then I have neighbors who don’t have to pay and they get to farm. If you’re producing any kind of agriculture product that’s for sale, it’s supposed to be monitored.”

Clint Bishop spoke as a former marijuana user who has produced nursery stock for 28 years. He said what is happening in California, according to a New York Times story, is the state is growing three times as much marijuana as its residents consume. He claimed that if someone was manufacturing and distributing prescription drugs on the same scale they would be imprisoned.

“I don’t see any enforcement,” he said as he addressed Medina directly. “There’s the smell all the time around my house down at Fairview and Fallon Roads, which is in your district, Mr. Medina. These people are illegal and dealing drugs and there is absolutely no enforcement. I have to ask the Board of Supervisors, how are you going to guarantee us you’re going to enforce anything? You’re not enforcing anything right now.”

He explained that there are 73 permits in Monterey County and that San Benito County will be “destroyed by the competition.” He compared what might happen in the county to what is already happening in Denver, Colo., where he recently visited and said he saw thousands of “patients” who he described as “mostly unemployable.” He said by Colorado law people are not supposed to smoke marijuana in parks, but smoke from marijuana obliterates the views throughout parks.

“You’re kidding yourselves if you say it’s for medical use,” he said. “This is a gold rush that’s going to be over in a few years, and like with any other gold rush there will be a trail of devastation.”

After several more speakers, Gomez concluded by saying that a website is being designed so that residents could keep track of the most recent developments.